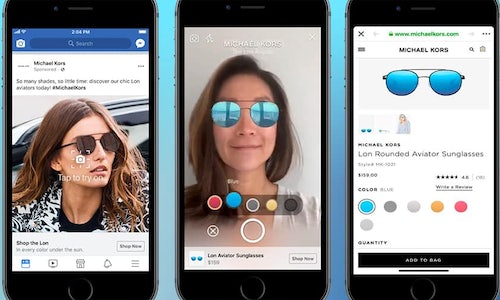 To further solidify the brand's role as a leader in emerging social and digital media trends, Michael Kors partnered with Facebook to create and run the first-ever Augmented Reality (AR) advertisement on the platform. The advertisement launched June 27, 2018, coinciding with National Sunglasses Day, and promoted the Michael Kors Lon aviators. Fans could virtually try on and shop the sunglasses directly within the Facebook app. The brand concepted this initiative with two main objectives in mind: to drive innovation by becoming the first brand to run an AR ad unit on Facebook, positioning Michael Kors as a leader in the future of mobile advertising, and to generate omni-channel sales around a key product category.

Latching onto a timely moment for retail and eyewear brands alike (National Sunglasses Day), Michael Kors created an experience where users could virtually try on various colors of the Michael Kors Lon aviators. The experience, which was only available in the US, began with a video ad in the Facebook newsfeed featuring campaign model Andreea Diaconu in various colorways of the Lon aviators with a "tap to try on" call-to-action (CTA). When clicked, the ad opened the Facebook camera app where a 3D model of the sunglasses was superimposed onto the user's face through augmented reality. Once the sunglasses were "on," users could tap through color swatches to try on the various lens colors (including red, blue, black, silver and gold) as well as move their face around the screen to see how the sunglasses looked from different angles.

From the ad, users could view the product on MichaelKors.com and seamlessly add the product to their cart and complete the purchase. Additionally, the ad included advanced sharing capabilities, allowing users to easily share their AR experience directly to their Facebook story or download the photo or video.

Additionally, Michael Kors set up the ad units in a way that tested the AR unit against a traditional video link post ad, using different CTAs, to understand whether the AR component added value in driving engagements and conversions. Areas of measurement included both brand lift (awareness, favorability and intent to purchase) and sales lift (incremental online and in-store sales).

To further promote this innovative campaign, Michael Kors also created content around the AR feature for the brand's organic social channels. Michael himself recorded a message to fans using the AR experience that encouraged fans to keep an eye out for the experience in their Facebook newsfeed. This was published to the brand's Instagram Stories to further amplify the campaign. Additionally, Michael Kors uploaded the AR experience to Facebook's Camera Effects as an organic feature for anyone in the world to use.

On July 10, 2018, when Facebook publicly announced this new ad type, the brand received substantial recognition and praise. Over 30 articles, from publications including The New York Times, AdAge, AdWeek, CNBC, Forbes, Mashable and TechCrunch, celebrated the brand's digital innovation. Additionally, Mobile Marketer named the app the "Campaign of the Year," recognizing Michael Kors as the first brand to incorporate AR technology into a Facebook newsfeed campaign.

Additionally, by allowing users to virtually try-on and purchase the Lon Aviators through the app, the brand saw a +14% incremental lift in conversions. From a brand affinity perspective, Michael Kors experienced a +20.4 point lift in ad recall, a +5 point lift in favorability and a +3.9 point lift in purchase intent, underscoring the effectiveness of this new ad type. 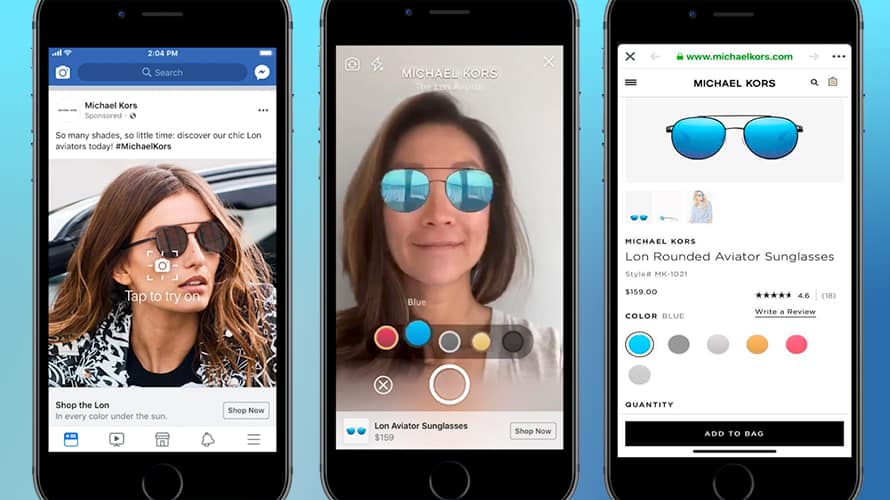