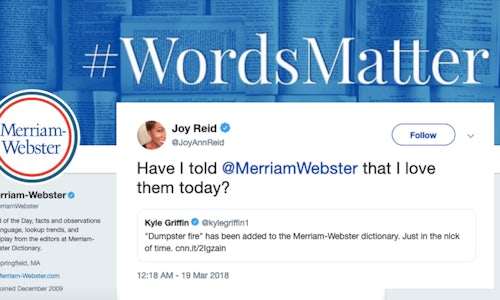 In 2016, we set out to show that The Dictionary could have a voice. This year, we wanted to prove that voice wasn't just a party trick, but had become a vibrant and essential part of the social media landscape. Our goal was to give our audience a smart, reliable source of information to help them understand both the culture around them and how language ties into it in fun, unexpected ways.

Our challenge was to maintain an online presence that reflected all the ways the English language is a living, fascinating thing. We pushed ourselves to show the world an authentic, clever social effort that was timely and interesting, all while staying true to our mission of documenting how language shapes the world. We've shown that words don't just matter; they also have immense power.

We've studied the English language as it's changed for almost 200 years, but there's no reason we have to sound like it. Our strategy was to meet our fans on their level, with humor, personality, and cold, hard facts. And a few GIFs here and there (it is the Internet, after all). It works because it's not a marketing construct: everything about our voice is informed by our real thoughts, interests, and irrational love of language. And our Slack channel — we really do sit around and geek out about language all day.

Whether it's a trending word, a brand-new one, or the dreaded "literally," we're right at the intersection where language meets daily life. When real-time lookups for a single word increase suddenly—meaning a lot more people are looking it up than usual, all at once—we can usually trace that back to an event people are watching, talking about, and thinking about. There's no telling where a story will come from, so the events that drive spikes in lookups represent all corners of our culture. Sometimes they're from TV, other times from music or movies, and, here and there, from politics. Okay, a lot are from politics. With Twitter we can share our discoveries as they happen.

We don't just track the language as it's being searched; we also track it as it evolves. Our editors are always hard at work defining new words, and as a result our New Words release in March was mentioned by outlets ranging from NPR to Marvel's official webseries. And as much as we watch words as they change, we also study where they came from: in October, our Time Traveler feature—which arranges words by the year they were first found in print—made headlines across the Internet and all over Twitter.

We're also just such word nerds. Day in and day out we lead the conversation about language, providing guidance on commonly confused words, giving people new information on things they might see all the time, and nursing their pet peeves by letting them know that words they despise have been entered in the dictionary longer than they've been alive. We're also not afraid to drop the veneer and get goofy—or let a renowned astrophysicist know he should stay in his lane.

By letting people in and making language relatable (and only sometimes posting 100 obscure words in a row in an ill-advised attempt at glory), we've established @MerriamWebster as a trustworthy, fun corner of the Internet. It's been our priority to always treat our audience with the respect they show us. Throughout it all, whether we're answering questions on meaning and usage, clarifying tricky words, or tracking lookups during Supreme Court hearings, @MerriamWebster provides a snapshot of the zeitgeist.

As a result, our Twitter account has grown to over three quarters of a million followers, with tens of millions of impressions a month and over 3,000 media hits in outlets like TIME, The Washington Post, and HuffPost.

Our social media efforts have been profiled by Forbes, which called us "a bright roadsign providing unadulterated knowledge," as well as in interviews with ABC News and Bustle.

With the trust of millions and a voice with staying power, Merriam-Webster is here to help people navigate the world around them, one word at a time.