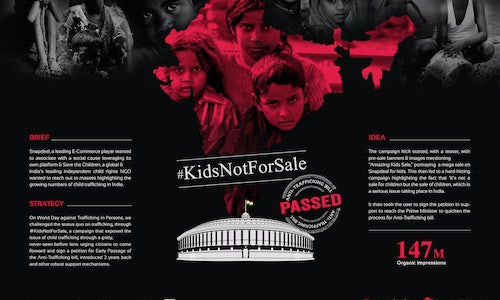 Snapdeal, one of India's largest E-Commerce player wanted to associate with a social cause by leveraging its own platform. We partnered with Save the Children, India's leading independent child rights NGO that believes in the fact that every child deserves the best chance for a bright future and that's why the NGO is fiercely committed towards ensuring the same.

Unfortunately, price tags are put up on Human lives, putting our children's future in jeopardy. We wanted to create awareness about the growing problem of child trafficking in India.

Human Trafficking has been dubbed as the third largest crime in the world and India is no stranger to this unfortunate practice. In India, an estimated 7 children go missing every hour. Half of them, are never able to return home. Last year, nearly 1 lakh children went missing. Crimes against children in India increased by an alarming 13.6 per cent in 2016, as per Government figures.

Frequently, these children, both boys and girls, are trafficked into illicit activities including commercial sexual exploitation, domestic servitude, agricultural work, factory work, mining, and on many occasions even forced to give up their organs or fight in conflict zones thus leading to exploitation.

The dynamics of trafficking of children are often varying and very complex to decode. While many children are abducted, sometimes children are also sold by a family member or an acquaintance, lured by false promises of education and a "better" life. It is hard to estimate the degree to which children suffer, but trafficking and exploitation is an increasing risk to children around the world.

With an aim to combat the same, Snapdeal along with Save The Children, an NGO aiming towards giving a bright future to each and every child launched #KidsNotForSale. To grab maximum eyeballs for the campaign we started a teaser campaign that portrayed a sale called 'An Amazing Kid's Sale', it showcased any other sale related to kids' products on Snapdeal.

But, the harsh reality was revealed on the day of launch when we made the citizens of our country face the fact that how innocent children are sold every day in and out. All the visitors who signed in for 'An Amazing Kid's Sale' were re-directed to a dark website that showcased a sale of children and not a sale for children.

This step created a stir in the market as this is a serious issue taking place in India. The portal showcased the hard-hitting dynamics of trafficking amongst children and how they are trafficked into illicit activities including commercial sexual exploitation, domestic servitude, agricultural work, factory work, mining, and on many occasions even forced to give up their organs or fight in conflict zones thus leading to exploitation.

It then took the user to sign the petition in support of urging the Prime Minister and the government to quicken the process for Anti-Trafficking bill which was introduced to the government in 2018.

We challenged the status quo on trafficking, through a campaign that exposed the issue of child trafficking through a gritty, never-seen-before lens urging citizens to come forward and sign a petition for early passage of the bill and other robust support mechanisms.

SIGNATURES ON PETITION: 6242, leading to the Government of India quickening the process and passing the Anti-Trafficking bill after 2 years of it being proposed in the parliament.

Many celebrities and influential people of the parliament along with millions of Indians came together to voice out to put a stop on the 'Child Trafficking,' garnering 147 Million overall organic impressions including media coverage, nationally and internationally.

TWITTER: the keyword trended at number 3 for more than 3 hours alongwith 8329 mentions and 68.9 million impressions. 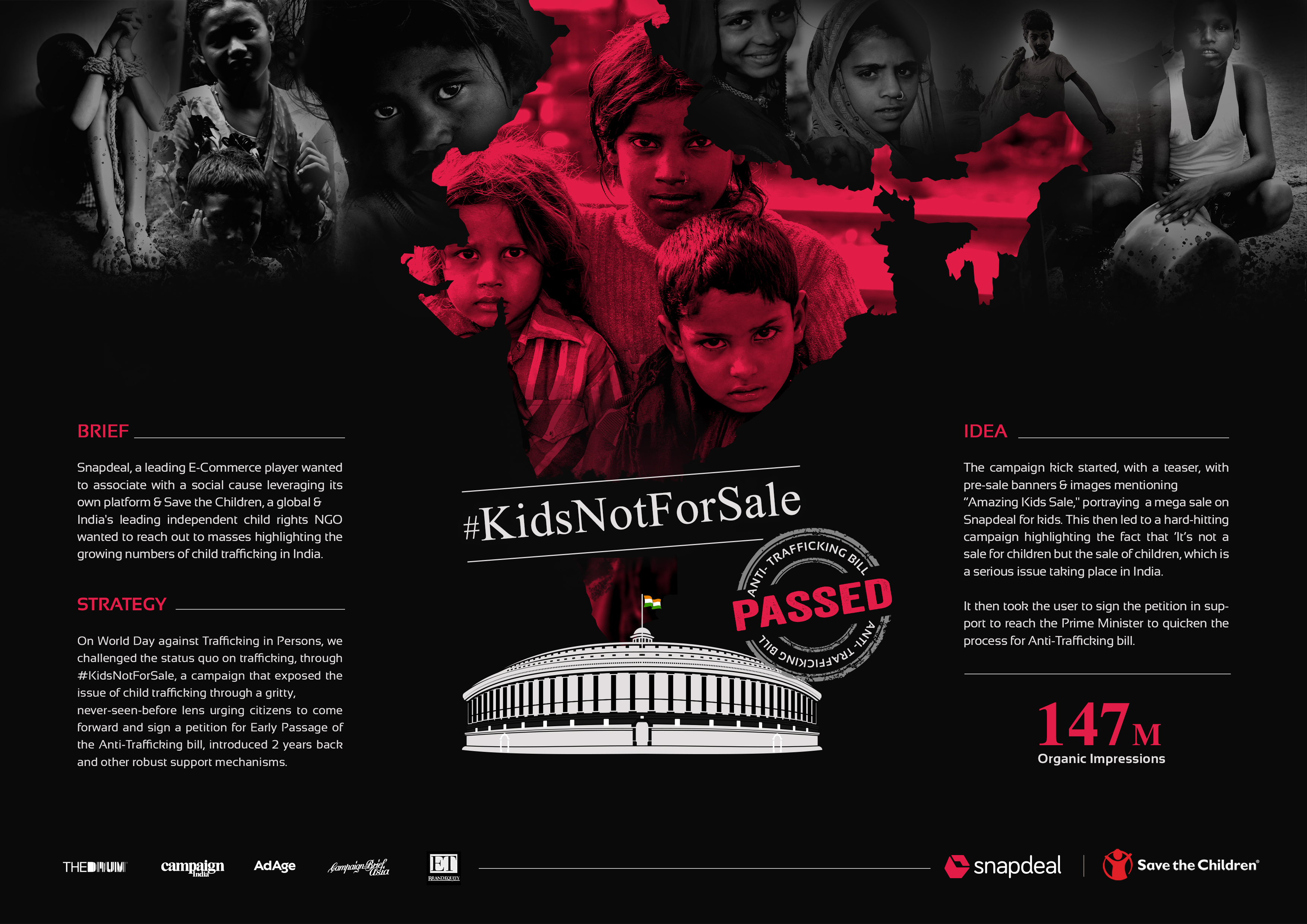 WATConsult, Snapdeal and Save the Children