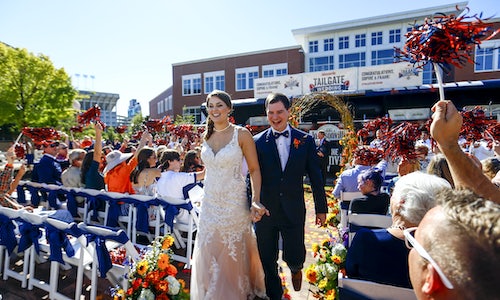 As Johnsonville entered its second year as the Official Sausage of the Southeastern Conference (SEC), the brand sought to continue strengthening its visibility and recognition with residents in the Southeast region of the United States. As the brand fully immersed itself in SEC culture, two major themes stuck out: family and football. The Johnsonville team found that for engaged SEC couples, planning a wedding in the fall can nearly be impossible. SEC fans live, eat and breathe Saturday football in the fall and trying to find a football free weekend is often an issue for diehard SEC fans.

To help ease the burden that comes with planning a wedding ceremony during football season, Johnsonville recognized the opportunity to leverage Johnsonville's SEC sponsorship as a way to bring the brand into the conversation and help solve a real problem.

Planning began in the fall of 2017 and we mapped out a strategy based off the SEC football calendar. We eyed key pulses and planned the contest launch around the biggest event on the conference's schedule, the SEC Championship Game in December 2017.

With an announcement date in mind, we needed to create a PSA to rally couples to enter with the credibility of a recognizable spokesperson synonymous with SEC football and southern lifestyle. At the same time, this spokesperson had to have broad appeal to college football fans, while also keeping a pop culture relevance, leading us to Tim Tebow.

Our team worked closely with Tebow through the strategic and creative planning to ensure an authentic SEC-themed piece of creative content to help engage fans. We launched the contest and our video on November 30, the day before the SEC Championship Game, across Tebow's and Johnsonville's social media channels, plus conducted media outreach to help spread the word.

We created a Tailgate Wedding website for the contest to live, where couples could enter to win by detailing their unique stories and the obstacles they faced planning their fall weddings. The Tebow video and media coverage surrounding the launch helped our contest receive over 380 entries. We tracked, read and ranked each individual entry based a 100-point grading scale, and chose our winning couple in May, Auburn alums Sophie and Frank.

A few months later, we sent them to meet with ESPN & SEC Nation's Marcus Spears for a round of radio row interviews at SEC Media Days in Atlanta, as part of their Tailgate Wedding experience. This resulted in another pulse of media coverage and buzz about the wedding.

Later that summer, Johnsonville hosted the couple at its headquarters in Sheboygan, Wis. to meet the couple and review all of the wedding planning details they had put together. One of the factors that makes Johnsonville a unique place to work is its employee experience work environment. Keeping this mind, we gave Johnsonville employees, or Members, the opportunity to get involved with not only the planning, but also the execution of the wedding event itself. From the officiant, to the catering, to the photographer, Johnsonville Members played a role in the wedding and traveled down to Alabama to help make the wedding day everything the couple wanted, and more.

Sophie and Frank's Tailgate Wedding took place on October 13, 2018 at Auburn University, prior to the matchup between Auburn and Tennessee.

Tebow capped the wedding ceremony off with a toast to health and happiness for the couple, as all in attendance raised a glass to the newlyweds. Media from across Alabama were in attendance to capture the details of the wedding and a video captured from the ceremony went live later that day on Tebow's Twitter.

A few weeks later, we created an all-encompassing sizzle reel to tell the full story of the Johnsonville Tailgate Wedding.

The launch video generated national and local online and broadcast coverage, resulting in more than 363K+ views as well as 67 organic placements for more than 22MM+ impressions.

The Tailgate Wedding website reached over 380 entries, with couples detailing their unique backgrounds and the obstacles they faced when planning a fall wedding.

The wedding day itself drove coverage resulting in 54 placements and over 79MM+ impressions. National placements included People.com, The Big Lead (USA Today), OK! Magazine and InTouch Weekly. The wedding also stirred up buzz across key SEC regions, including Birmingham, Ala., Panama City, Fla. and Shreveport, Miss., even extending to markets outside of the SEC from San Diego to Boise, Id.

Tim Tebow shared a video of the wedding on his Twitter account, which resulted in more than 91K+ views. 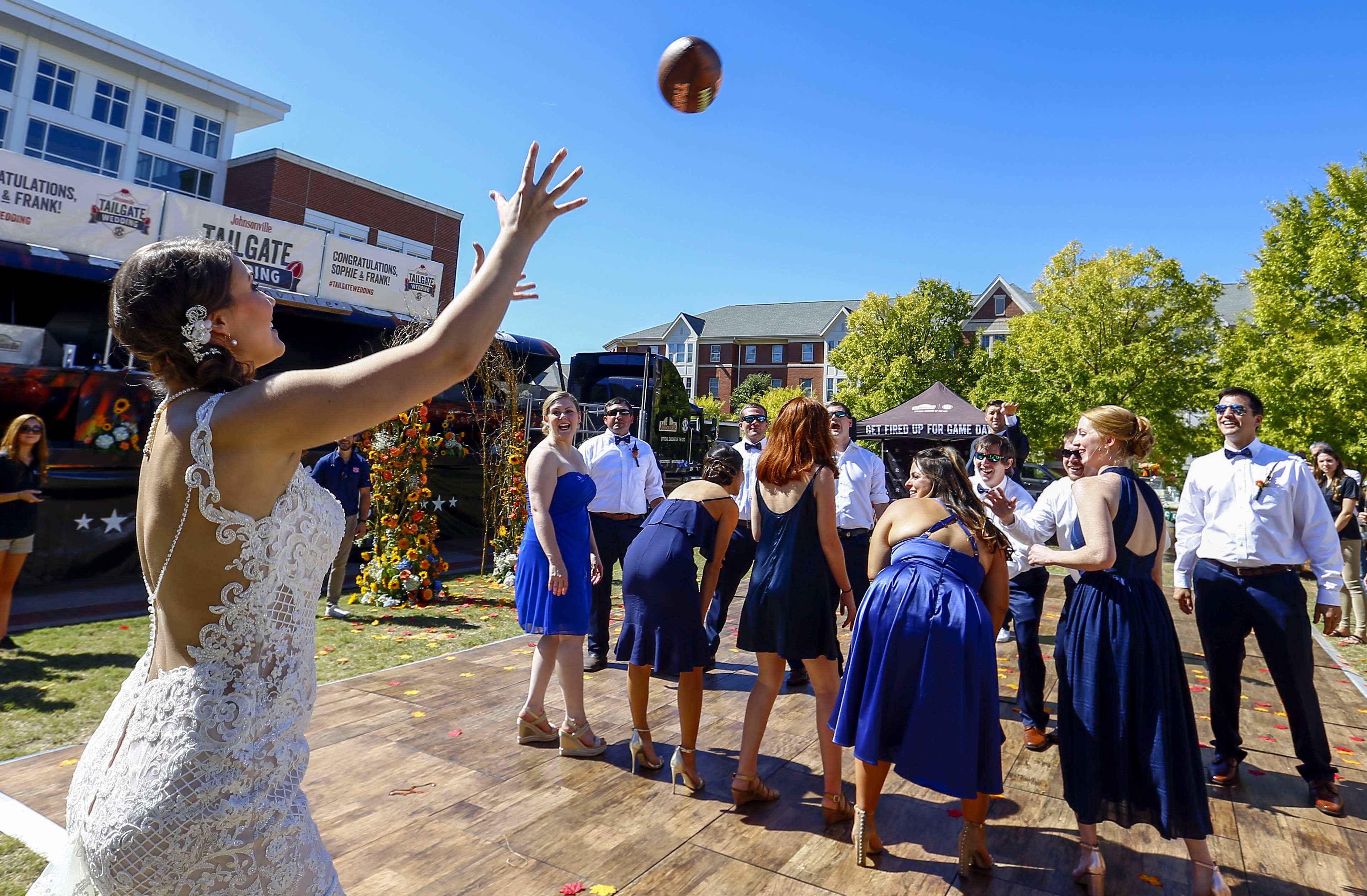 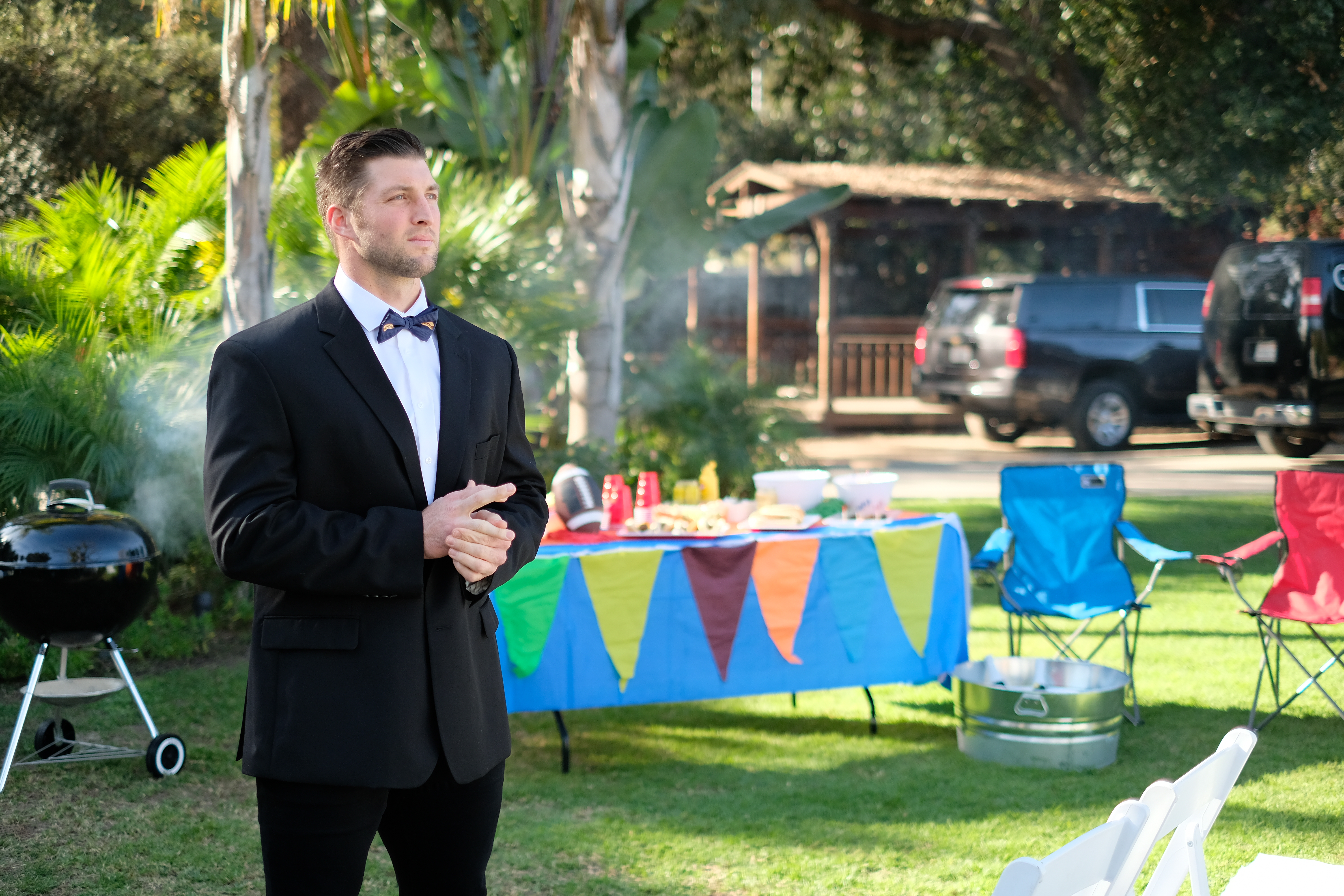 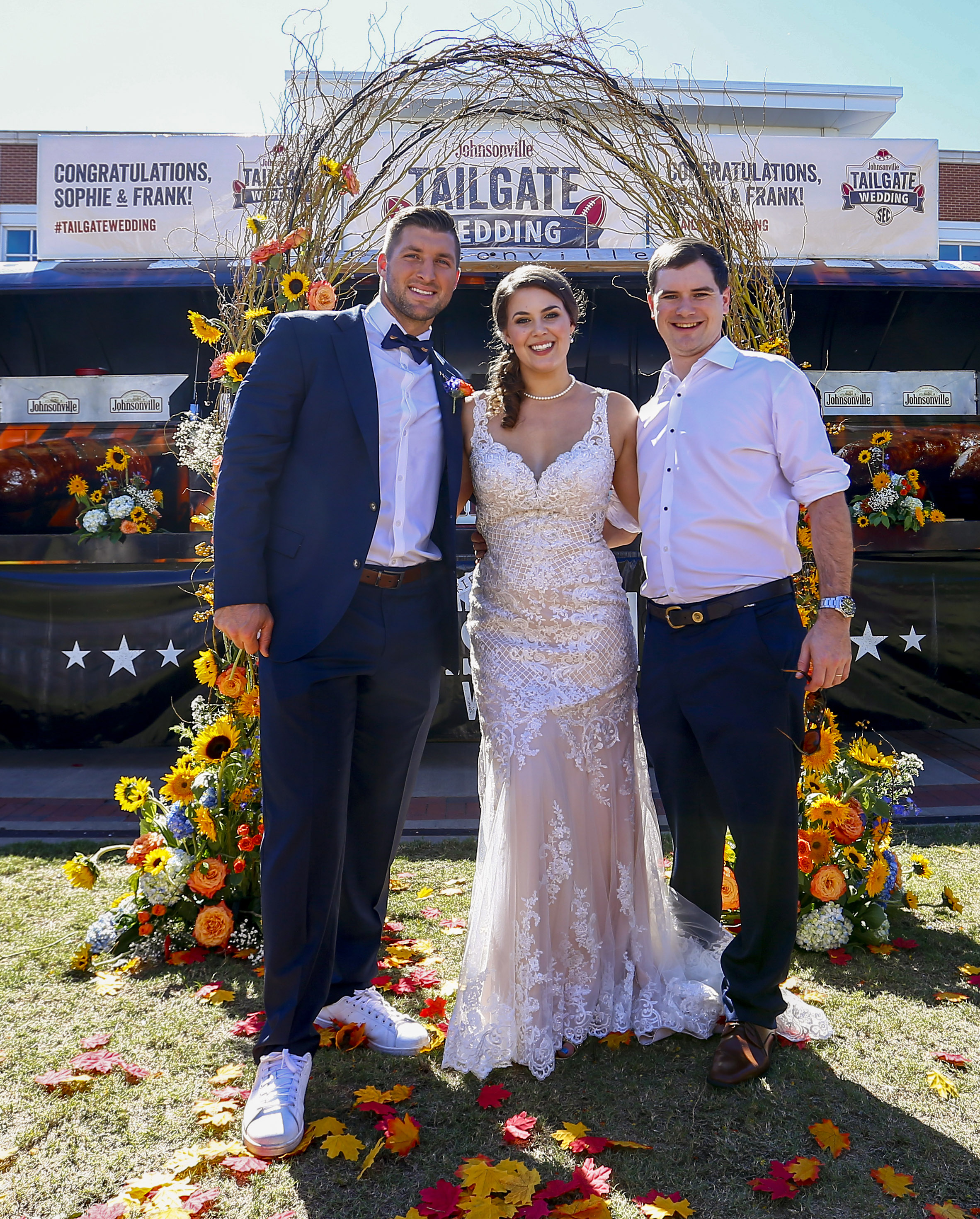 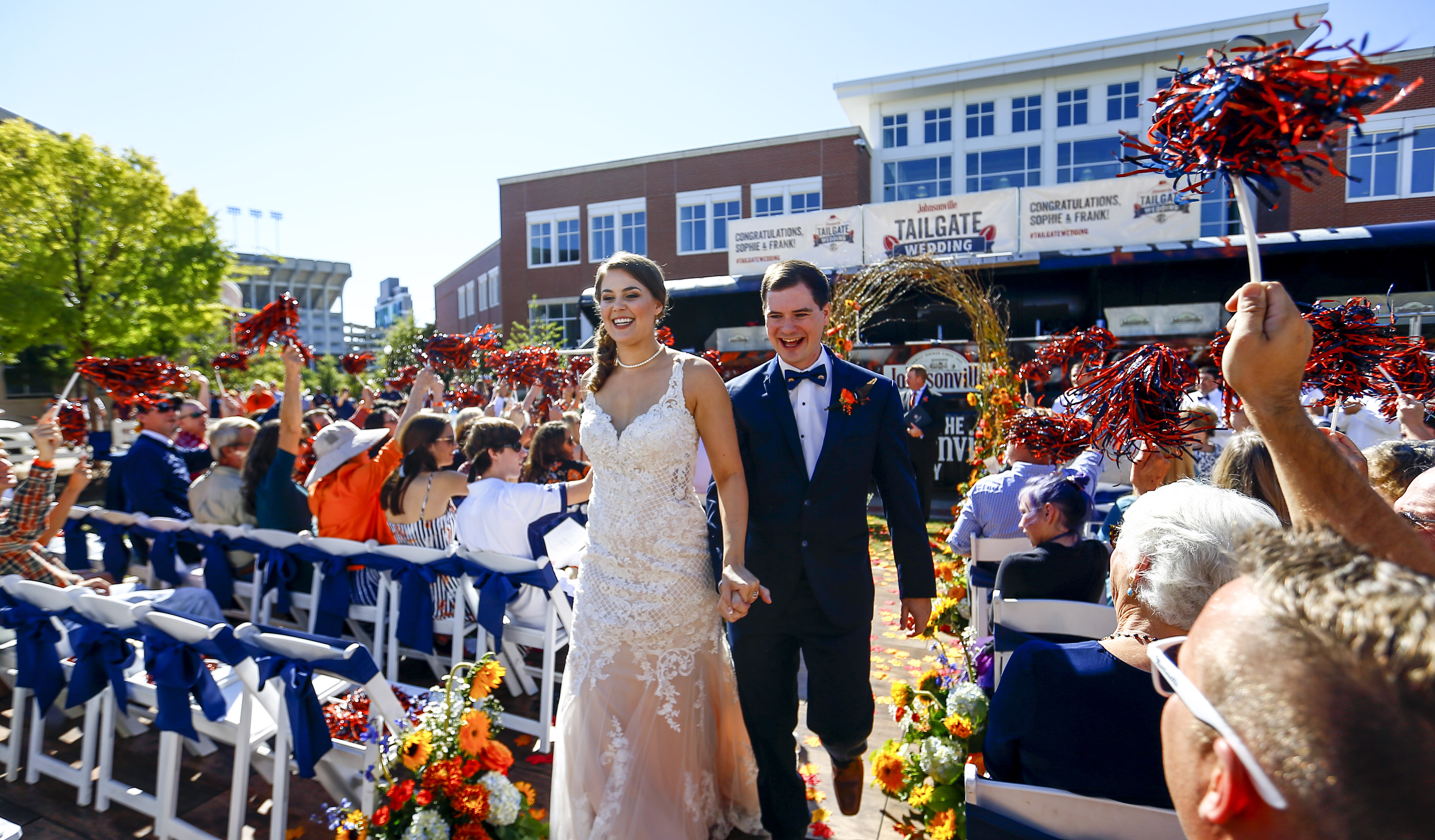 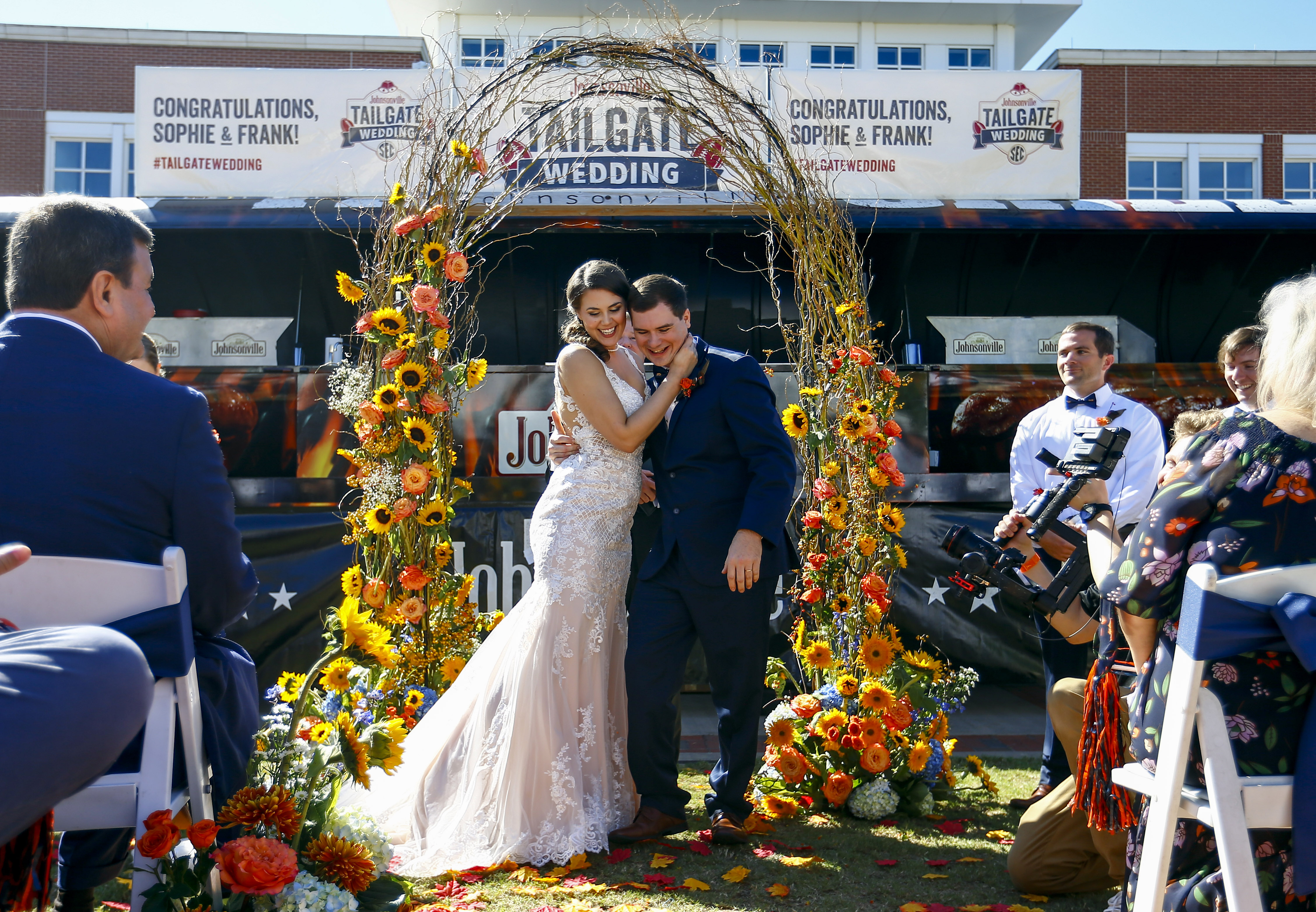