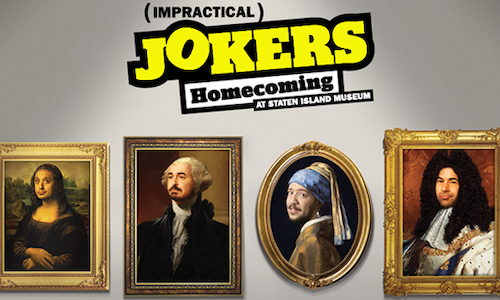 The Impractical Jokers are the kings of the truTV castle, a monster hit, our longest running series, #1 on truTV and #1 in its timeslot for 18-34 and 18-49 demographics. The Jokers amassed a loyal and passionate following online, with +4.4 million fans across social platforms and more than 6 million online video views per week.

These four lifelong buddies from Staten Island who grew up busting each other's chops for free got their own museum exhibit in July 2018! Impractical Jokers: Homecoming explores the story of the Jokers, whose hidden-camera, comedic show has become a pop culture phenomenon. The exhibition included original costumes, props and art, interactive installations, special interviews, behind-the-scenes secrets.

Impractical Jokers: Homecoming explores the story of four longtime friends from Staten Island and how they became this pop culture phenomenon. Steeped in embarrassment and awkward situations that make us both laugh and cringe, the humor is built upon a foundation of trust and camaraderie amongst the four guys, James "Murr" Murray, Sal Vulcano, Brain "Q" Quinn, and Joe Gatto.

The Museum features original costumes, props and art created over the past seven seasons. Interactive displays include new interviews, episode highlights and clips of behind-the-scenes production, revealing some secrets for the fans. This exhibit is a journey with the guys from high school hijinks to mainstream comedic success that all started on the shores of Staten Island. Interactive surprises and some "Easter eggs" are found throughout the museum to make the Impractical Jokers' exhibition experience as unexpected as the Impractical Jokers themselves.

The opening of the exhibit was teased with posts on the Jokers feeds. Fans lined up to be part of the opening, some driving hundreds of miles to share in the celebration. 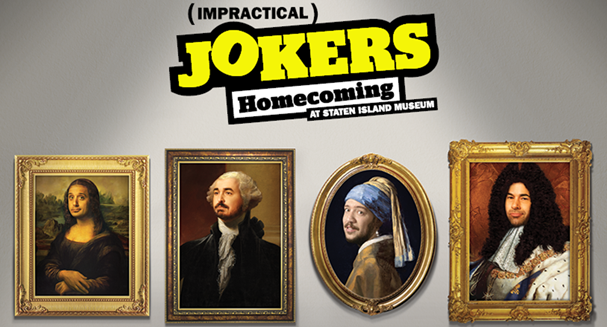