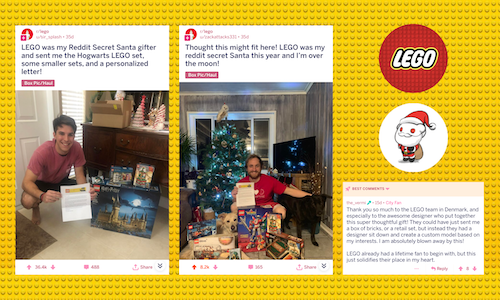 How LEGO partnered with Reddit to bring joy to the holidays

The holidays are a busy time for everyone — especially consumers and marketers. The market is cluttered with brands and advertisers all vying for the attention of time starved consumers. How do you connect with your customers when they're so busy to even have time for themselves? How do you capture their attention in an innovative way and build brand love? How do you stand out from the crowd?

With this in mind, the objectives for the LEGO holiday campaign were:

Cut through the noise and drive awareness of LEGO during the holiday season and support the LEGO Retail messaging of "Every Gift has a Story".

Connect the LEGO brand with holiday gifting to support and drive sales of priority LEGO sets during the holiday season through their direct to consumer channels.

Reddit's Secret Santa Gift Exchange is a user-created experience that spreads happiness through the generosity of gift giving. Every year, the Secret Santa Gift Exchange brings together groups of strangers from around the internet, who are all connected by their willingness to give, create a sense of community during the holiday season, and spread joy and surprise to complete strangers. More than 714K gifts have been given across 225+ countries since the program's inception and over 868K people have signed up to participate - including prominent celebrities like Bill Gates, Snoop Dogg, Jimmy Fallon, Shaq and Alyssa Milano.

Now in its tenth year, Reddit's Secret Santa is the world's largest online gift exchange and has become a global tentpole event on Reddit. LEGO saw the perfect opportunity to reach the passionate audiences on Reddit and extend the message of their "Every Gift has a Story" campaign. Since Reddit gift participants are in the gift-giving mindset, each gift sent and delivered has its own individual story.

To launch "Every Gift has a Story," LEGO sponsored the 10th Anniversary Secret Santa Gift Exchange and activated their campaign as follows:

- As a principal sponsor of 2018's Reddit Secret Santa, LEGO branded the Secret Santa landing page and 11 emails sent out by the Reddit Gifts team.

LEGO drove massive awareness of their Holiday sets with a 'Cross-Platform Frontpage Top Post Takeover,' Reddit's highest-impact, widest-reaching package, which allowed LEGO to own Reddit's most valuable advertising real estate for 24 hours on 11/24, during their Black Friday/Cyber Monday activation.

LEGO also targeted relevant subreddit communities such as r/StarWars and r/HarryPotter with messaging focused on priority sets like the Star Wars Millennium Falcon and Hogwarts Castle, as well as core communities like r/LEGO.

LEGO also started to build the idea of community on Reddit through a Promoted Post Engagement Prompt, which is a native, branded promoted post meant to start conversations between LEGO and the various Reddit communities they targeted.

- After the official shipping deadline, some gift exchange participants are inevitably left without a gift from their original Secret Santa. Seeing this as an opportunity to build brand love and advocacy, LEGO partnered with Reddit and became an official Re-Matcher for Secret Santa! LEGO and Reddit worked in partnership to find LEGO fans and send them gifted sets suited to the interests they listed on their Reddit Gifts profiles. LEGO sent seven big, customized packages to Redditors just in time for Christmas, making sure those without a gift this year felt surprised and special. One Redditor wrote that he liked "anything just a little weird or unique," so the LEGO team got an official designer to create a one-of-a-kind tarantula model for his collection!

LEGO caught the attention of consumers. Buyers of LEGO and competitor brands reporting positive associations with LEGO Brand Attribute statements, with over 90% of respondents agreeing that LEGO sets offer a fun experience for families to build together and are a good option for holiday gifting.

The lift in Unaided Awareness for the campaign as a whole was 1.2x KMB's market norm.People are talking about LEGO. A social listening analysis showed a 48% increase in LEGO mentions post campaign launch

Earned LEGO Love. Seven lucky Redditors who received LEGO as a "Re-Gifter" shared their gifts on Reddit which generated 49k+ Upvotes and over 850 brand-positive comments. 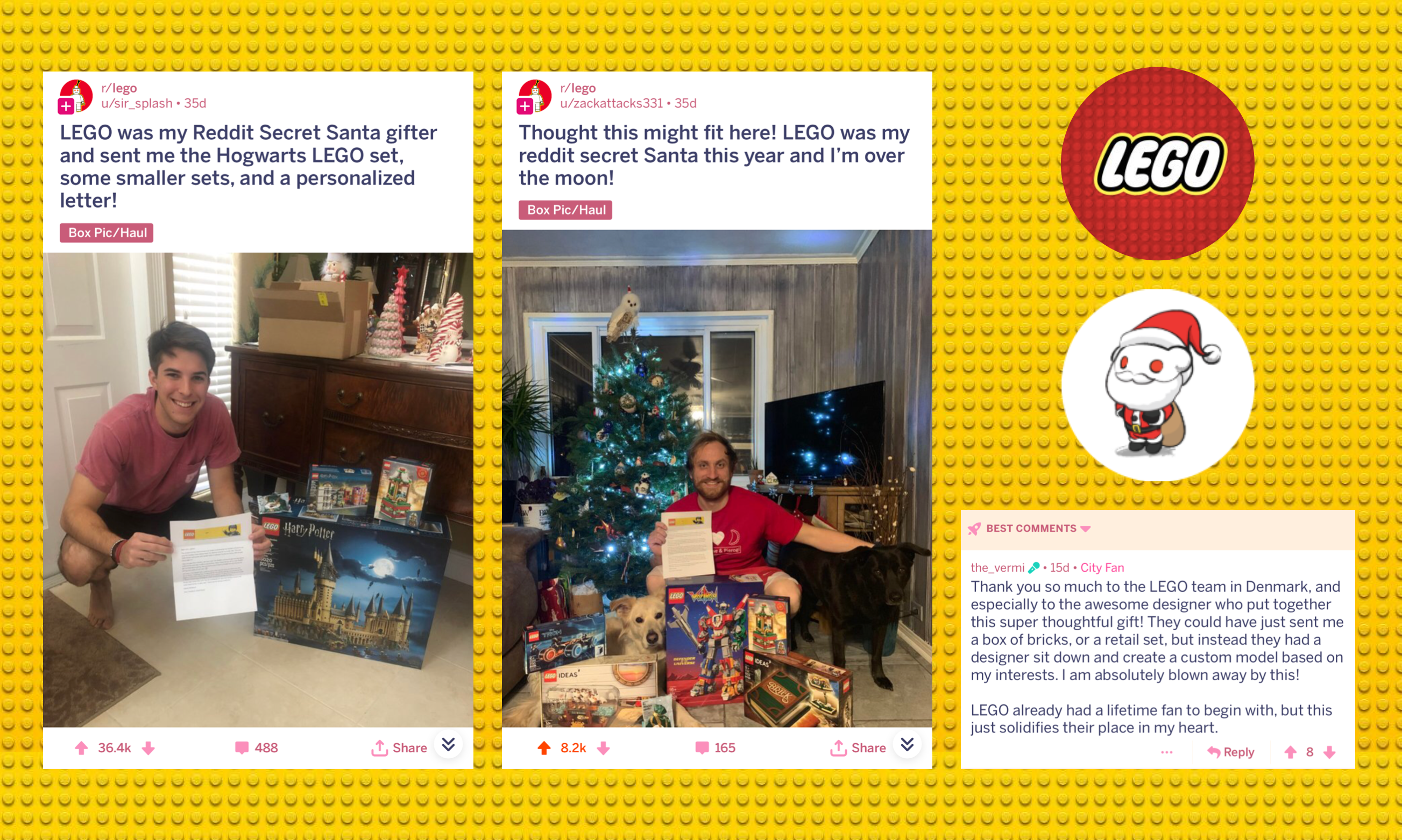