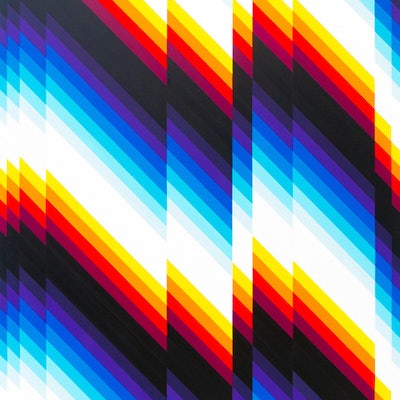 Self-described as a “child of the internet,” Argentinian-Spanish artist Felipe Pantone has made an internationally recognized career out of his technologically influenced youth. His trademark aesthetic, described by Forbes in 2018 as “Digi-Meets-Blade Runner Artwork,” is marked by futurist abstractions with pixelated bold colors offset by black and white geometric shapes and waveforms. Felipe uses social media to promote his work, growing his international appeal through a combined 275K+ Instagram and Facebook followers. The artist didn’t stop there, inviting fans to create their own Felipe Pantone-influenced designs on @configurableart, a newly launched second account.