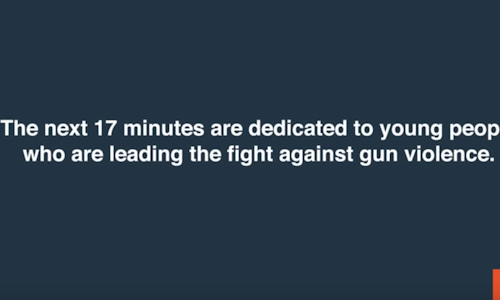 Following the tragic shooting in Parkland, students from across the country rose up to demand change. MTV leveraged its various platforms to lift up and amplify the voices of those young people activating, in turn inspiring countless others to engage in the fight to end gun violence.

The campaign kicked off during the National School Walkout on March 14, when MTV suspended its regularly-scheduled programming and turned over its linear, digital, and social channels to spotlight young people taking action to stop gun violence.

In the next phase of the campaign, MTV teamed up with the NAACP to send 17 buses of diverse young people from cities impacted by gun violence to the March for Our Lives in Washington DC on March 24. This unique partnership helped elevate the stories of students of color as part of the national conversation and ensured their voices were represented during this landmark march.

MTV's campaign was centered in five primary activations on the day of the National School Walkout:

1) MTV suspended network programming for 17 minutes, to stand in solidarity with the students walking out in honor of the 17 lives tragically lost in Parkland. During that time, MTV aired a special video highlighting the stories of 17 inspiring youth activists from around the country, driving viewers to find ways to take action in their own communities.

2) MTV turned over its Facebook, Instagram, and Snapchat accounts to students joining the walk out in various communities so followers could see first-hand accounts of young people taking action.

3) Video and editorial coverage of the walkout took over MTV News for the day.

4) The MTV.com homepage replaced its regular content with the video highlighting the 17 youth activists, as well as ways to get involved.

5) Finally, the MTV logo went orange (the color of gun violence prevention) for the National Student Walkout and remained orange through the duration of the campaign to keep attention on the issue.

A little over a week later, to help amplify and support young people of color who are fighting against gun violence, MTV supported March for Our Lives with these primary activations:

1) MTV joined forces with NAACP to donate 17 buses to help bring nearly 1,000 young people from cities across the country to march and speak out in D.C.

2) MTV tapped celebrities including Lady Gaga, Jimmy Fallon, Jennifer Lopez and Yara Shahidi to celebrate these young people and bring even greater attention to their efforts.

3) MTV News covered the march extensively, with broadcast hits featuring youth activists appearing on the channel throughout the day.

On the day of the National School Walkout, the 17-minute spot received over 400,000 views and garnered about 3.8 million total social media impressions while the youth takeover stories landed about 1 million views. The campaign dominated online conversation and became a "Twitter Moment," with our audience commenting on how moved they were that the network went dark to stand with young people.

MTV's partnership with the NAACP received press coverage in outlets including CNN, Teen Vogue, Mic, and The Hollywood Reporter. The story of the students traveling in the 17 buses to speak out against gun violence was amplified by over a dozen major talent, reaching upwards of 180M followers on social alone.

Anecdotally, many of the NAACP students were able to be on the ground in DC for the first time, one particular student even commenting: They never thought they would make it to D.C. before.