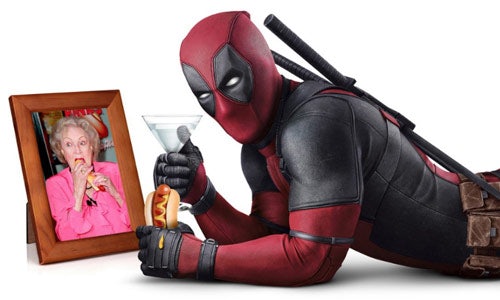 Deadpool 2 happened to be dropping alongside one of the year's biggest blockbusters. And while the first movie was one of the top grossing R-rated films of all time, sequels in Hollywood have a history of under-performing. Fans were nervous that too much studio money was involved and their favorite anti-hero had been watered down. So, we needed to prove that this was the same foul-mouthed, lovable oaf they were used to, while also delivering a hard-hitting, action-packed campaign that could rival The Avengers: Infinity War and Star Wars: Solo.

We decided to give fans exactly what they wanted: more Deadpool. Our writers worked to learn his voice and we kicked things off with a Happy Birthday tweet to one of the internet's most beloved old ladies, the queen of hotdogs and martinis (and one of Deadpool's favorite people), Betty White. The internet got pretty excited when they realized their favorite Merc with the Mouth was active again. And when fans demanded a trailer for the Super Bowl, we asked ourselves "what would Deadpool do?" and came to the conclusion that he'd probably break the 4th wall for the 8,000th time and blame Fox execs for being too cheap to purchase an ad. So we did that and then live-tweeted the entire game. Fans (and press) ate it up. People were excited to learn more about a movie that kept its central plot a huge secret. We started serving up daily social with a mix of text only tweets, trailer cutdowns, custom coloring pages, cinemagraphs, character cards and motion FX. And when The Avengers opened, we put all eyes back on Deadpool 2 having Ryan Reynolds tweet Deadpool's rejection letter from Tony Stark, and teasing fans about the possibility of those worlds one day crossing.

We also spent time addressing a problem the first film had created. Deadpool only followed one person on Twitter… Well, one cat. And that cat was Hello Kitty. For Deadpool 2, we decided it was time to follow a second person, but that person had to be just as amazing and cute and cuddly and family-friendly as the first. We scoured the internet for the perfect candidate. We asked fans to nominate each other. We heavily discussed just championing Betty White, and then we finally settled on the mustachioed man who would end up becoming the film's true fan favorite. The newest member of the X-Force: Peter W. We worked with filmmakers to develop his background, created a twitter and LinkedIn account so fans could follow him and connect, and filled both channels with as much content as we possibly could. People took a liking to Peter in a really big way. A fandom was developed and along with it came fan-made art and shirts and action figures and cosplay.

Building a following from the ground up for everyone's favorite new X-Force member garnered major media attention on it's own. The Peter campaign earned headline after headline and accumulated 68M impressions and 2.9M engagements alone. Combine those numbers with the massive media attention behind live-tweeting the Super Bowl and the 4th wall breaking antics of Deadpool, the social campaign for the sequel netted over 490M impressions, 31M engagements, 87M video views while increasing the total social following by 1.3M. Overall, fans stopped seeing our social accounts as "just another movie marketing campaign," and were instead excited to interact with the characters they love. We broke the 4th wall, we allowed people to have fun, and that was why they kept coming back. We didn't do anything crazy, we just gave them more Deadpool… and a little Peter. 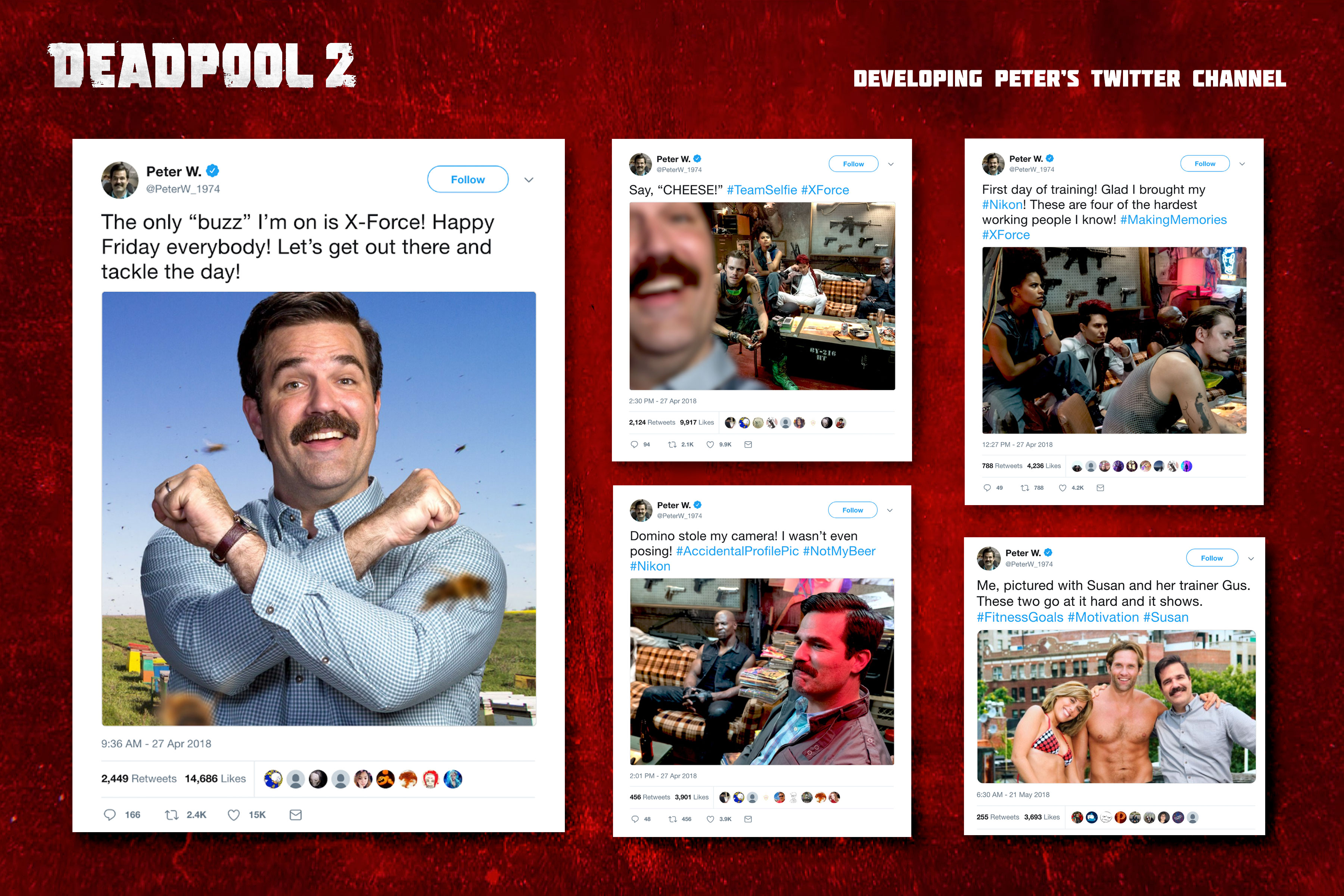 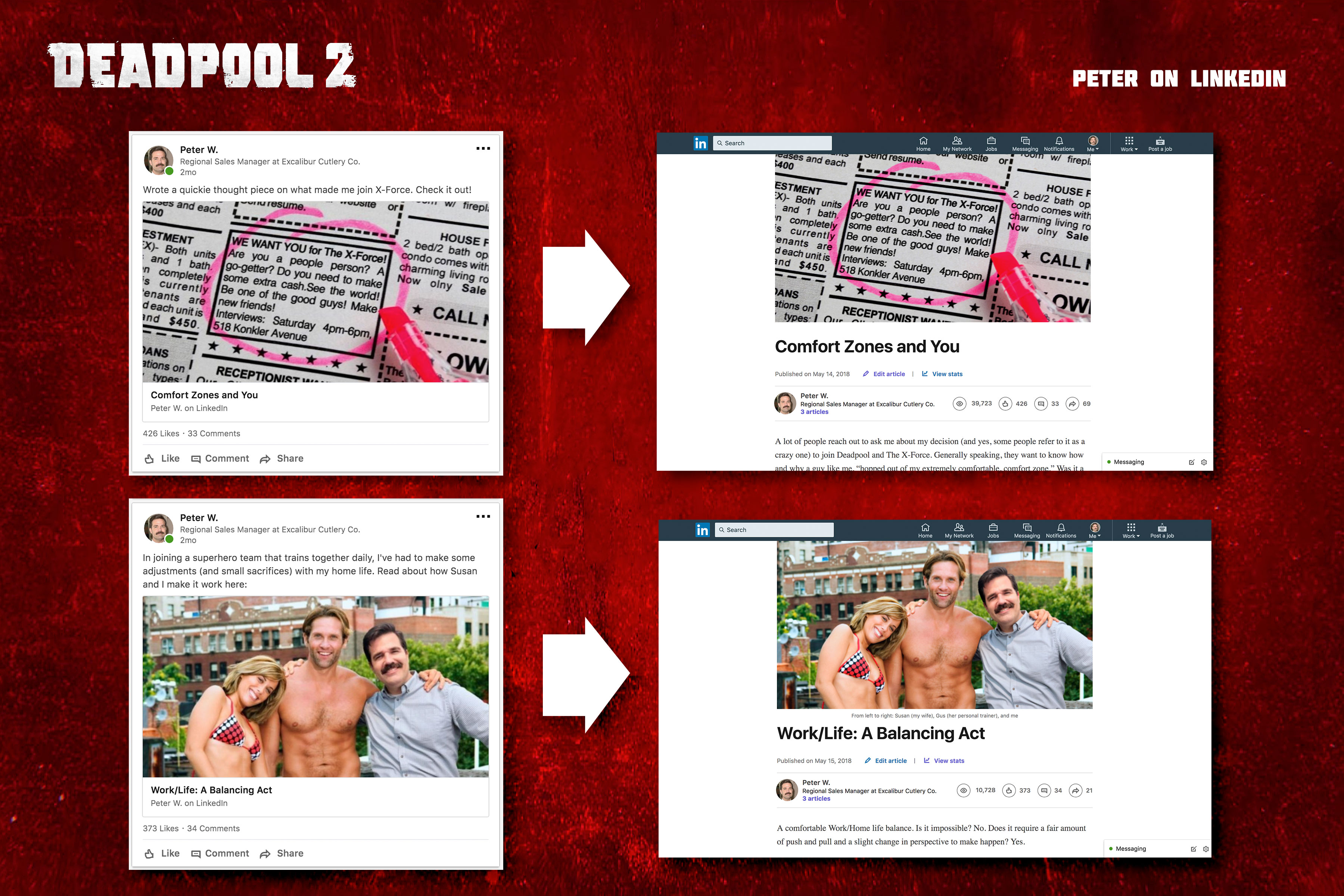 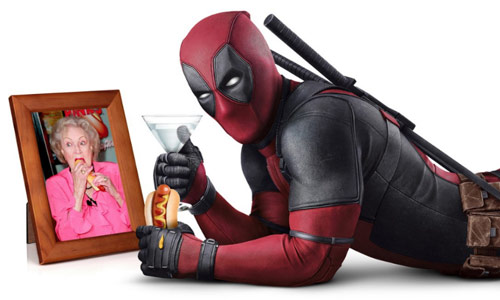 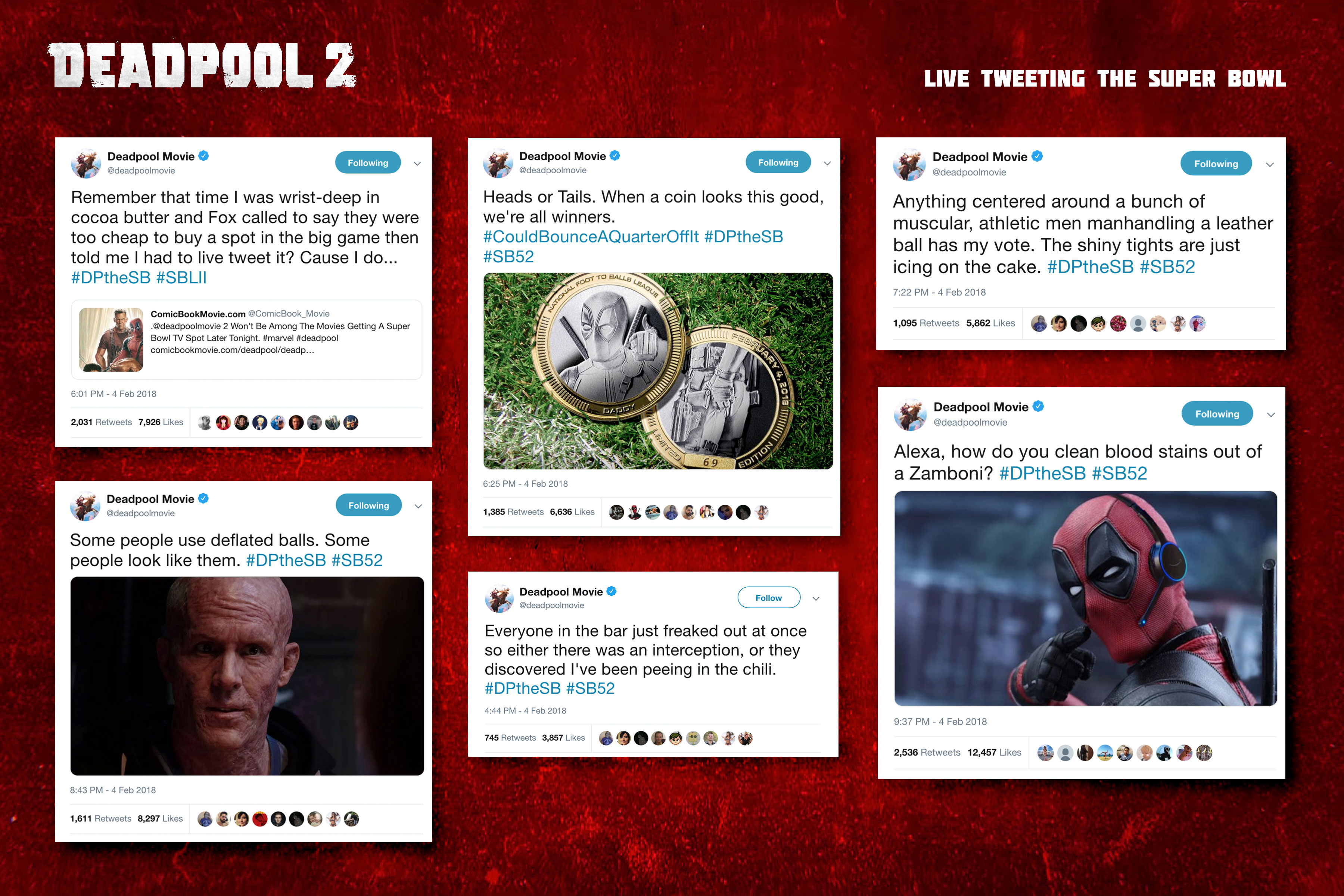 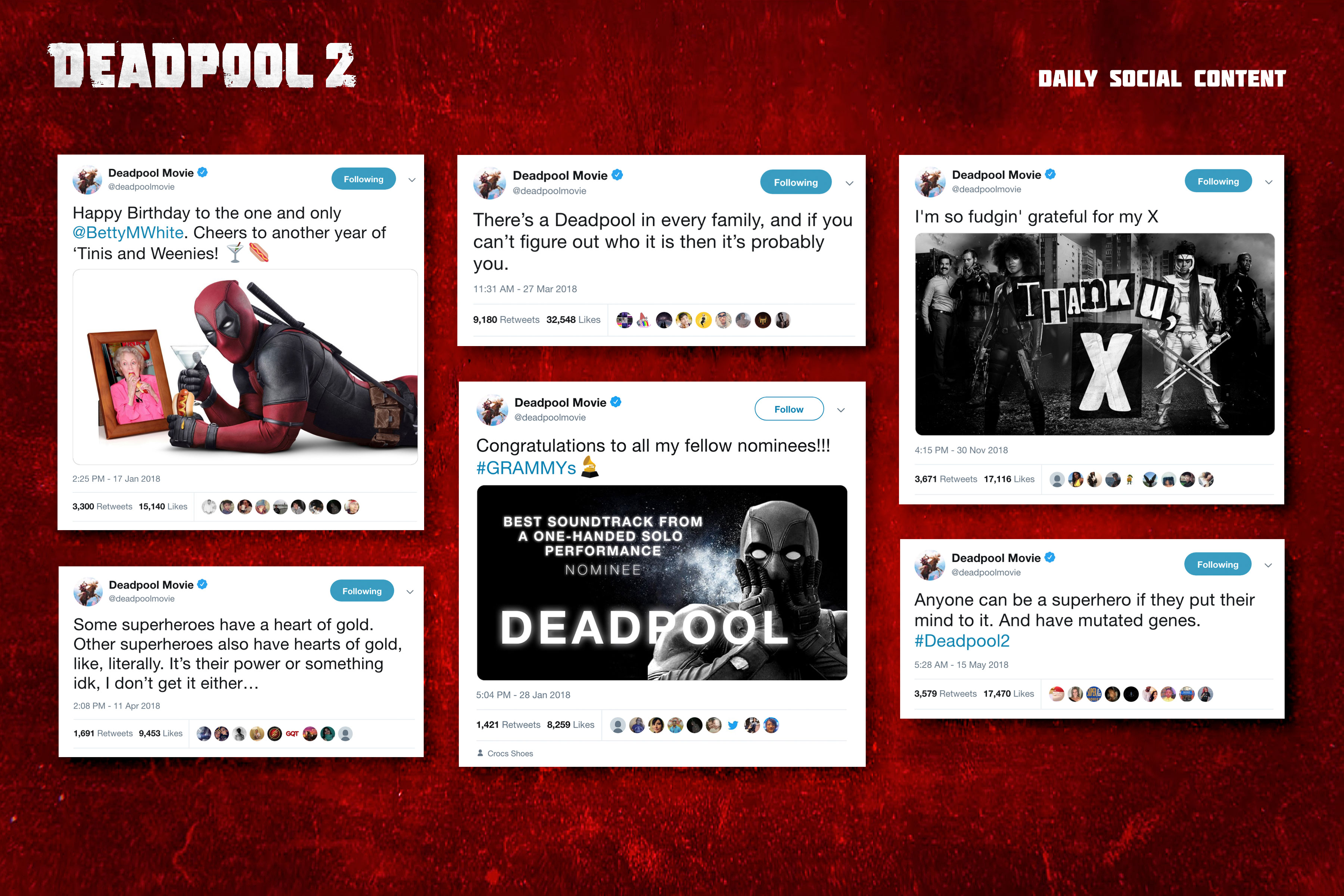 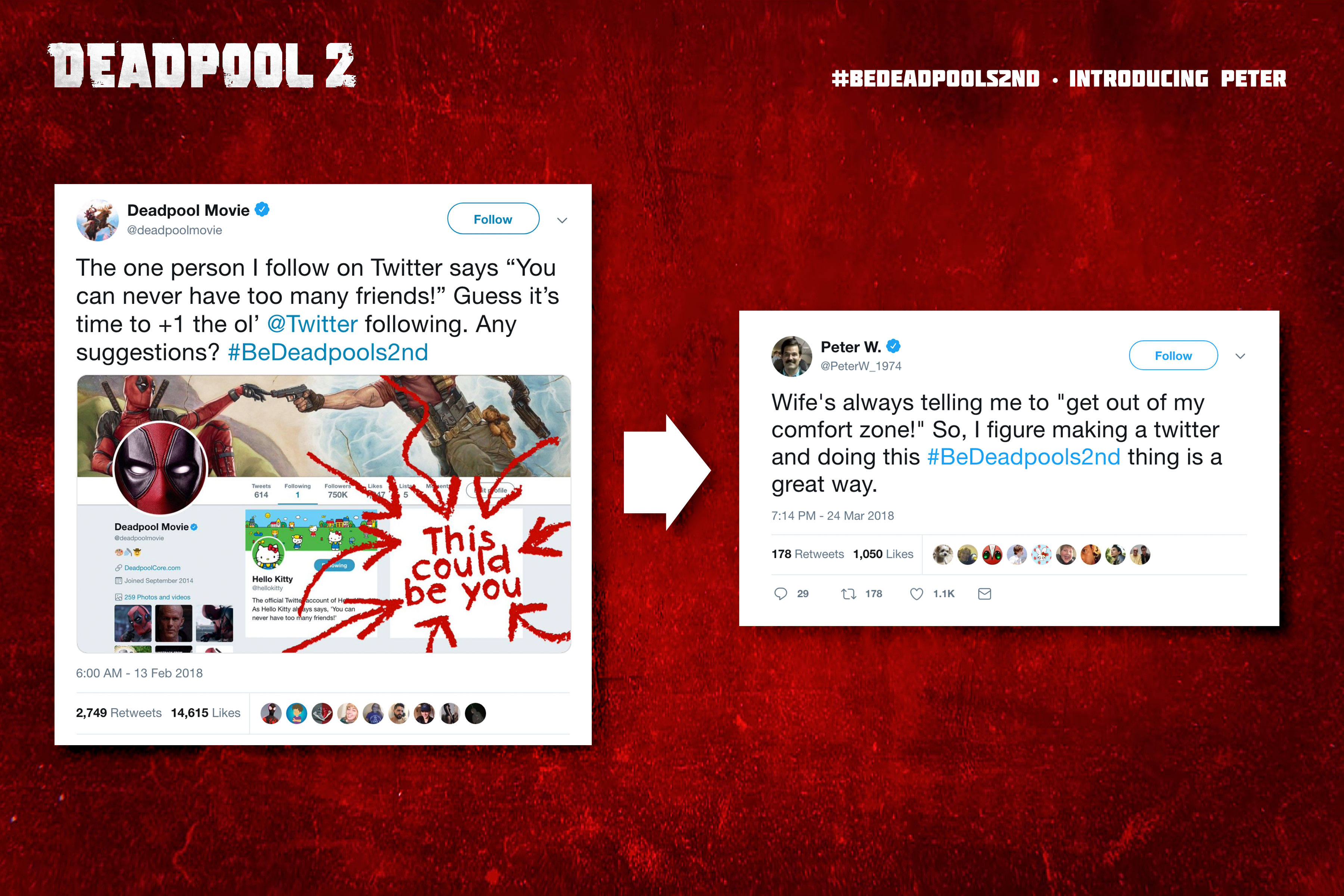