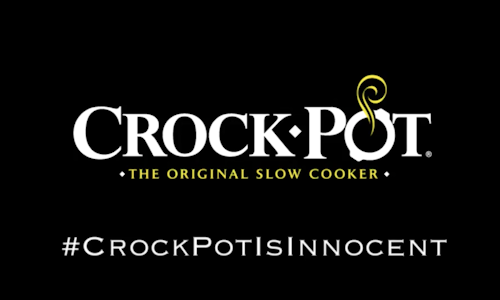 When one of Newell Brands' iconic brands, Crock-Pot®, was unexpectedly and falsely labeled the killer of one of television's favorite dads, Crock-Pot® knew it was in hot water. After a season of tantalizing teasers, the nation's #1 television drama, 'This is Us,' finally revealed during its season finale (20M+ viewers) on January 23rd, 2018, that the show's beloved protagonist father-figure, Jack Person, died in a fire caused by an old, faulty slow-cooker. Fans erupted and unleashed their misplaced hatred toward Crock-Pot® and the issue ignited overnight. By 9 A.M. the next morning, 618 news articles had posted and social media was ablaze. Social conversation was heavily negative in tone (90%) with a budding consensus that Crock-Pot® was guilty. These moments often devastate even the most storied brands, and most companies when faced with a potentially brand-crippling crisis would take a defensive stand. In response, Crock-Pot® decided to take an uncharted path – to prove #CrockPotIsInnocent – by using the show's popularity and cultural moment-in-time to elevate the brand. Instead of fighting fire with fire, the team capitalized on the moment, separating the television storyline from a moment that could have burned the brand, with a clever campaign to raise awareness and sales for the brand.

Thrust into an unexpected firestorm, the team cooked up a strategic recipe to extinguish the misdirected hatred, defend the brand and playfully remind the world that Crock-Pot® was innocent. Separating the television storyline from a real-life brand crisis, and essentially turning enemies into friends, was imperative as the brands' legacy was simmering – in a bad way. Leading with a corporate statement would not suffice, and the murder and arson accusations stacking up against Crock-Pot® were being taken literally. While the overwhelming majority of the conversation lived on social, at the time, Crock-Pot® didn't even have a Twitter handle as the brand's target demographic was not on Twitter. The fans of 'This Is Us' skewed younger and were using social media as their medium of choice. Crock-Pot® saw an opportunity to join and influence this conversation, and within hours, the team created the first ever Twitter handle for the brand @CrockPotCares. With a balance of empathy and playful defense, our social-centric response ensured one message was heard around the world – #CrockPotIsInnocent. This strategy quickly grabbed the attention of fans of the show on social media, shifting the narrative from a heavily negative story to a positive, supportive and fan-driven conversation around the now infamous kitchen appliance. But the team needed to take it a step further and turned our strategy and attention to the star of the show and victim of the accident – Milo Ventimiglia. The foundation of our creative strategic approach rested on one simple question: What if we could bring him back to life and have him prove there was no bad blood between his character, Jack, and the slow-cooker? If Milo (Jack) would publicly forgive Crock-Pot®, perhaps the public would listen and forgive as well. This would soon become the first-ever apology on behalf of a brand by a TV actor.

Speed and creative ingenuity were the key ingredients that secured Crock-Pot's innocence. Each activation invited unparalleled results through unexpected partners and fans. The team worked around the clock in the wake of the social media firestorm, consoling fans and reassuring those, who were dumping their Crock-Pots®, that the appliance was safe. This, coupled with interactions with the media and the countless broadcast news coverage and late-night television monologues, proved Crock-Pot® was innocent. For two weeks, the topic of 'This Is Us' and Crock-Pot® dominated social media and social circles alike. But the team was just getting warmed up, and the pivotal moment in the execution exceeded everyone's expectations. In partnership with the nation's largest television network, Milo Ventimiglia forgave the slow-cooker. Dan Fogelman, the show creator, produced a video starring Milo, in which he encouraged a divided country to come together around their Crock-Pot® slow-cookers to celebrate the Super Bowl. The tongue-in-cheek video closed with the Crock-Pot® logo and #CrockPotIsInnocent to show there were only good feelings between the character and brand. The video debuted on NBC's TODAY Show, one day before Super Bowl LII, and was promoted through 'This is Us' owned social and digital channels as well as various cast members' social properties. It soon went viral. Crock-Pot® also made multiple appearances with the Queen of daytime television, Ellen DeGeneres. In one instance, Milo elaborated on his video and praised Crock-Pot®. In another episode, Ellen gave Mandy Moore a housewarming gift, a Crock-Pot®. Fans followed the example of reconciliation as Etsy shops popped up selling 'This Is Us' Crock-Pot® decals to remind fans to unplug their slow-cookers.

Make no mistake, there was nothing slow about this slow-cooker miracle as our work accomplished in three weeks what some teams achieve in year-long campaigns. Crock-Pot®, a historically quiet yet industry-dominating kitchen appliance, skyrocketed from public enemy #1 to a pop-culture hero and on-trend brand. Crock-Pot® also made history with the first public apology on behalf of a brand by a television actor and its first Twitter account dedicated to addressing concerns and answering questions. The results speak for themselves:

2. Experts, media and public alike characterized the 'apology' as a "Crock-Pot® Super Bowl Ad" - a $5M+ value which cost the brand $0 - declaring the brand was "winning the Super Bowl without even having a commercial."

3. The campaign garnered 3.7 billion+ impressions in less than three weeks of sustained coverage resulting in 20,036 articles and 796,600+ social mentions.

4. @CrockPotCares - the brands' first Twitter account to address he questions and concerns - grew over 2000% within the first 48 hours.

5. Despite facing the biggest crisis in the brand's history, Crock-Pot® did not experience a decline in sales. Rather, sales increased 3.1% YoY - defying prior sales trends for the brand. 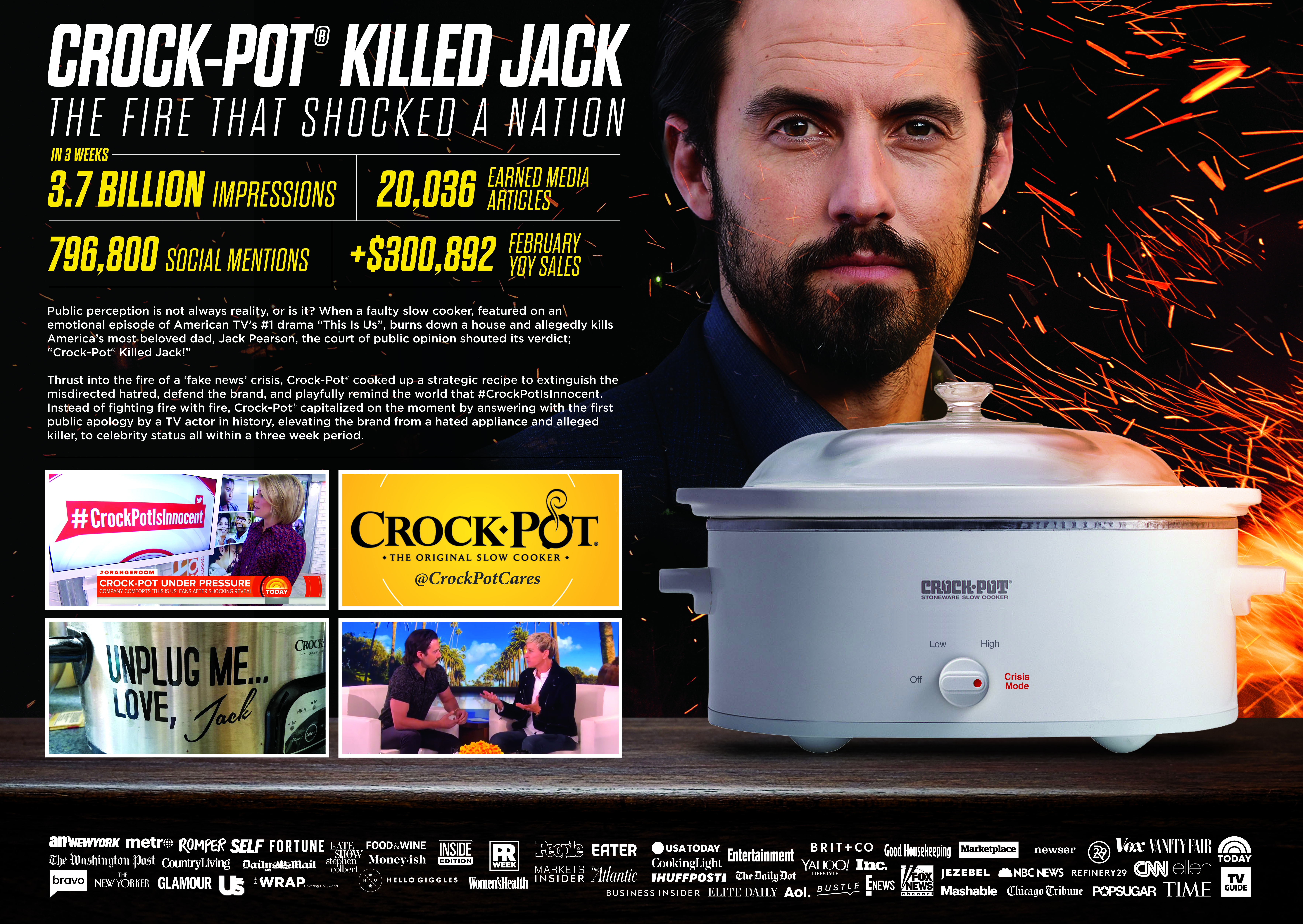