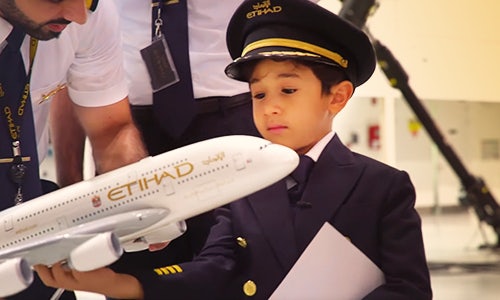 Through proactive social listening, we discovered a video featuring Adam, a young prodigy with sky-high aspirations of being a pilot starting to gain traction. On the cusp of going viral in its own right, we set out to create a human story that stood apart from with other brands could create.

Recognizing the importance of tapping into a grassroots online following like this, and translating into meaningful, soulful content was going to be a challenge. Rather than be an organization capitalizing on one young man's talent, we wanted to celebrate his bright mind and reward his precocious and curious behaviour.

With our social philosophy at the forefront of all considerations, we are constantly looking for ways to tell genuine stories that inspire the adventurous side in all of us.

We invited Adam to Etihad HQ for a full day of fun and adventure, topped off with a flight simulator experience.

The social media team banded together to get the project into full swing. Within the week, we had storyboarded, prepared for, shot and released a video featuring the little pilot in an Etihad Captain's uniform - a near impossible feat!

With an entirely internally-produced series of video and image assets, this story stayed close to home and we believe this was immediately evident to audiences, making it relatable, genuine, warm and most importantly - shareable.

Published in 2017, and promoted throughout 2018, the campaign gained organic momentum towards the end of 2017, and to boost the snowball effect, we put into place a paid social plan in early 2018 to achieve incredible numbers.

With a combined organic snowball effect and minimal paid boost, the video achieved about 50-50 organic-paid results, to a total of:

Topped with 100% positive sentiment in response to our video, this campaign was a roaring success. Despite a finite amount of boosting and PR efforts, this story also continued to pop up across various social and online news channels organically. 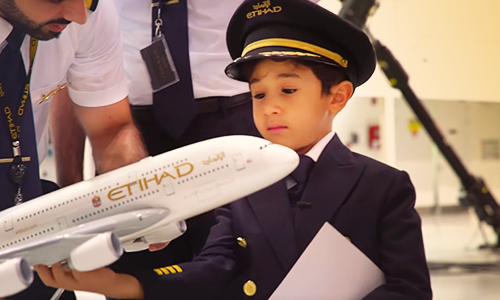