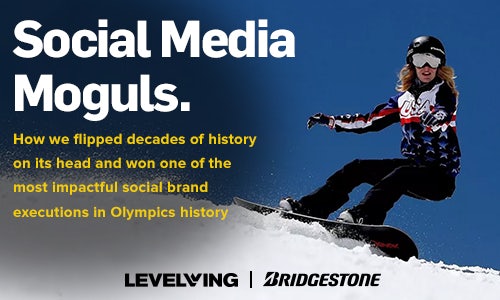 Ambitious? Yes. But that was Levelwing's strategy with Bridgestone: rewrite the book on digital media marketing allocation and execution for social. What better place to conquer it than on the world's biggest stage, the Olympics.

Traditionally, Bridgestone had approached the Olympics media activations heavy in television with digital playing a supporting role. But we knew we could do more and make the dollars work harder. We needed to change the routine and reinvent the asset allocations with a bolstered emphasis on leveraging deeper partnerships and amplifying the brand voice.

We needed a plan and a production execution that fulfilled these lofty goals. After concepting in Nashville, filming in Colorado, Ohio, and Los Angeles, editing in New York City and building further post and messaging content in Charleston, we collected our work from half-a-dozen states and built a campaign that worked harder than anything we had ever seen before.

To achieve these newly crafted goals, we went back an activation… back to 2016 and our learnings from supporting the Summer Olympic Games in Rio. We saw a strategy in place that was productive, but nowhere near where we could take Bridgestone and their athlete's Clutch Performances.

We knew we could achieve the Gold Medal-level results we demanded, and knew we needed to push further to win. So, we set forth fighting for a plan that would flip the marketing game on its head... strapping in a "SOCIAL FIRST" mantra on this massive marketing stage. Sure, it wasn't the same strategy other Olympics sponsors activated, but our plan was not about doing what had been done before. It was about creating a new and calculated plan with Bridgestone, because we knew the power in social targeting and following the dollar all the way through a customer's purchase journey.

And thus, a strategy was born for a tire company; not a flashy fitness brand or a global credit card behemoth, but for a lower-interest unit in the automotive industry that wanted to rock the boat and prove this strategy could indeed work — and thrive. We wanted to take that auto category and truly show that a tire brand could win at the highest level by pushing the entire industry into the sharpened lens of social media. It was a plan that took guts from the leadership at Bridgestone and at Levelwing, but this was the year to make it a reality. Finding that perfect happy place to engage in the humanity and passion of these athletes performing when it matters most laddered up so directly and perfectly with the brand that it was an activation we simply couldn't grow without.

The age-old plan of dragging only 1-2 highly priced advertising baits across an entire ocean of consumers through a single television network just wasn't as unique and performance-driven as we wanted it to be. We needed to activate a new strategy... one with a marked shift. So, we flipped the script and worked tirelessly to film and create an entire stable of new, uniquely diverse content that could work far, far more effectively for us. We wanted to move beyond the direct-network buy from Rio in 2016 and reimagine a new optimized plan for custom content. We leveraged shoots with our 6 athletes — totaling well over 20 highly produced short-form and longer-form video assets — and then amplified content to our consumers in real-time while they were actively engaging in the Olympics Games. We strategically built custom-audiences of our most engaged consumers, continued to re-engage with them throughout the Olympic Games, and used these audiences to build lookalike audiences which allowed us to create a scalable solution that reached only highly targeted audiences. It's an approach that is helping to truly redefine the future of not only Bridgestone but, as a result, most likely the future of Olympics-sponsored activations altogether.

Did it work? It really worked.

We created nearly 223 million impressions over a less-than 3-month campaign, resulting in unprecedented brand exposure. Olympian Elana Meyers Taylor summed up the outstanding results of the activation perfectly. The undeniable star of the U.S. Women's Bobsled Team, who won a Silver Medal in 2018 in Pyeongchang (on a torn achilles, no less), shared her unique perspective by exclaiming: "Being able to share my story on a greater platform has been tremendous to my career… partnering with Bridgestone has been an incredible journey." And that journey extended far past Elana. We worked tirelessly to find unique ways to extend all 6 Bridgestone athletes and their tremendous, unique stories to the forefront of American social appreciation — and engagement.

The resulting numbers of these calculated efforts during the Olympics and Paralympics Games fueled a staggering level of engagement, which topped 53 million. A study by Turnkey Sports and SportsBusiness Journal shared that Bridgestone was one of only two global brands who, "improved their standing the most with consumers during the Pyeongchang Winter Olympics" (via BizJournals.com). Landing praise as one of the two best Olympics activations — which was largely driven by our industry-changing shift toward creating customized content through social. It's something we take great pride in, not just for our own brand wins, but in knowing we're helping to create a radical change in capitalistic strategy for the next Olympics as true pioneers of the ever-evolving and complex social landscape. 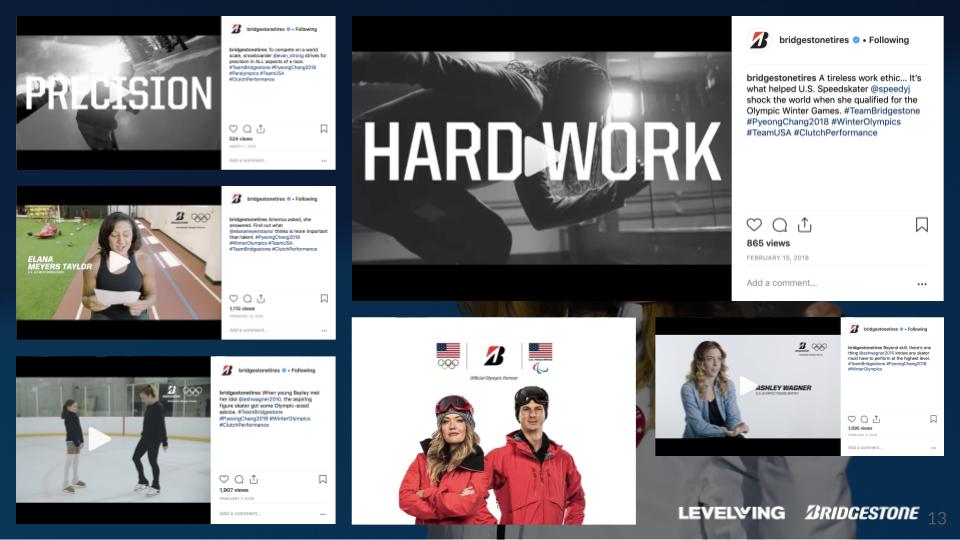 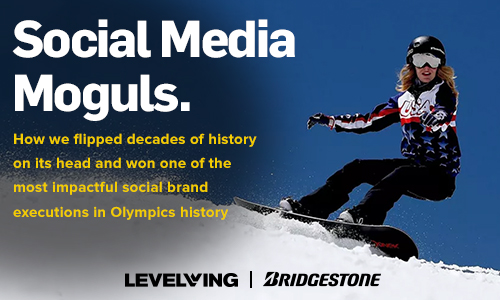