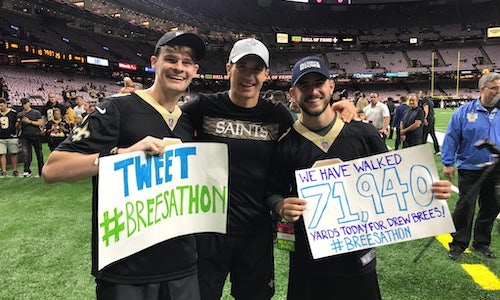 In anticipation of Drew Brees breaking the NFL's all-time passing yards record on Monday Night Football, The Checkdown set out to capitalize on the inevitably buzz-worthy moment. Our plan was to show fans how ridiculously impressive 71,941 passing yards is by walking the entire distance (~41 miles) in one day. We immediately contacted the Saints Social/PR team and they were able to get the idea in front of Drew, who couldn't believe it. They then helped us arrange to meet Brees at the Superdome after we completed our journey.

We charted a path through New Orleans, following the Mississippi from the airport to Chalmette, where we'd turn around and head straight for the Superdome. After attracting a crowd in the famous French Quarter, we'd walk onto the Saints' field and shake hands with Drew.

Our objective was to create a full day of social coverage that would heighten an already epic moment, and culminate in shaking hands with a legend.

On social, our baseline strategy was to stay interactive with our fans all day long. We updated them consistently with customized graphics, livestreams, and native video updates on our Twitter and Instagram channels throughout the day. We updated every milestone on IG Stories and Twitter, went live three times on Instagram and 10 times on Twitter, and posted natively throughout the day across our platforms. Our content was amplified by @NFL, @NFLNetwork and @Saints, as well as local news stations, NFL players and reputable outlets in the sports culture landscape.

We made sure our story was easy to follow by posting map updates in real time whenever we hit a big mile-marker. Not only did this make our journey easier to consume, it made the 41-miles-in-one-day marathon way more believable. Our fans saw our legs giving out on our lifestreams. They heard the exhaustion in our voices. We even went live during a torrential downpour in the afternoon, showing our fans that we insisted on we pushing on, walking through ankle-deep puddles. New Orleans TV outlets followed us as we walked, and we coordinated with our team in Los Angeles to cut those broadcasts together for social updates.

A major aspect of our strategy was to push our hashtag, #BreesAThon. We used it on all of our updates and posts and encouraged any fans following along to tweet to us using the hashtag. After urging our audience to post about our journey all morning, the conversation began catching on in the later afternoon leading up to the game. We anticipated that if we had enough people tweeting #BreesAThon before the game even began, it would become a storyline as Brees closed in on the record.

We wanted to organically embed #BreesAThon into the surely viral moment of Drew breaking one of the most impressive records in sports.

When we made it to the Superdome, there were TV cameras waiting for us. The story had been building in New Orleans and online all day, and fans seemed to be on the edge of their seats waiting to see if we would actually meet Drew Brees. We led some Saints chants outside the stadium, then went inside with our contact from Saints PR. And then, in the North end zone, we shook hands with Drew Brees. He said, "You didn't really walk that far, did you?" in partial disbelief. The video went viral on Twitter, and continued getting massive engagement for us, @NFL and @Saints until Brees ultimately broke the record soon after. When that happened,

• our story became a National trend on Twitter, earning over 36K tweets and owning the conversation around the passing yards record.

• we were featured on the front page of NFL Reddit

• we were the #2 story on the Bleacher Report app

#BreesAThon became the hashtag fans were using to talk about Brees' record-breaking night, even outside the context of our marathon. We successfully embedded our brand and voice into a historic moment. 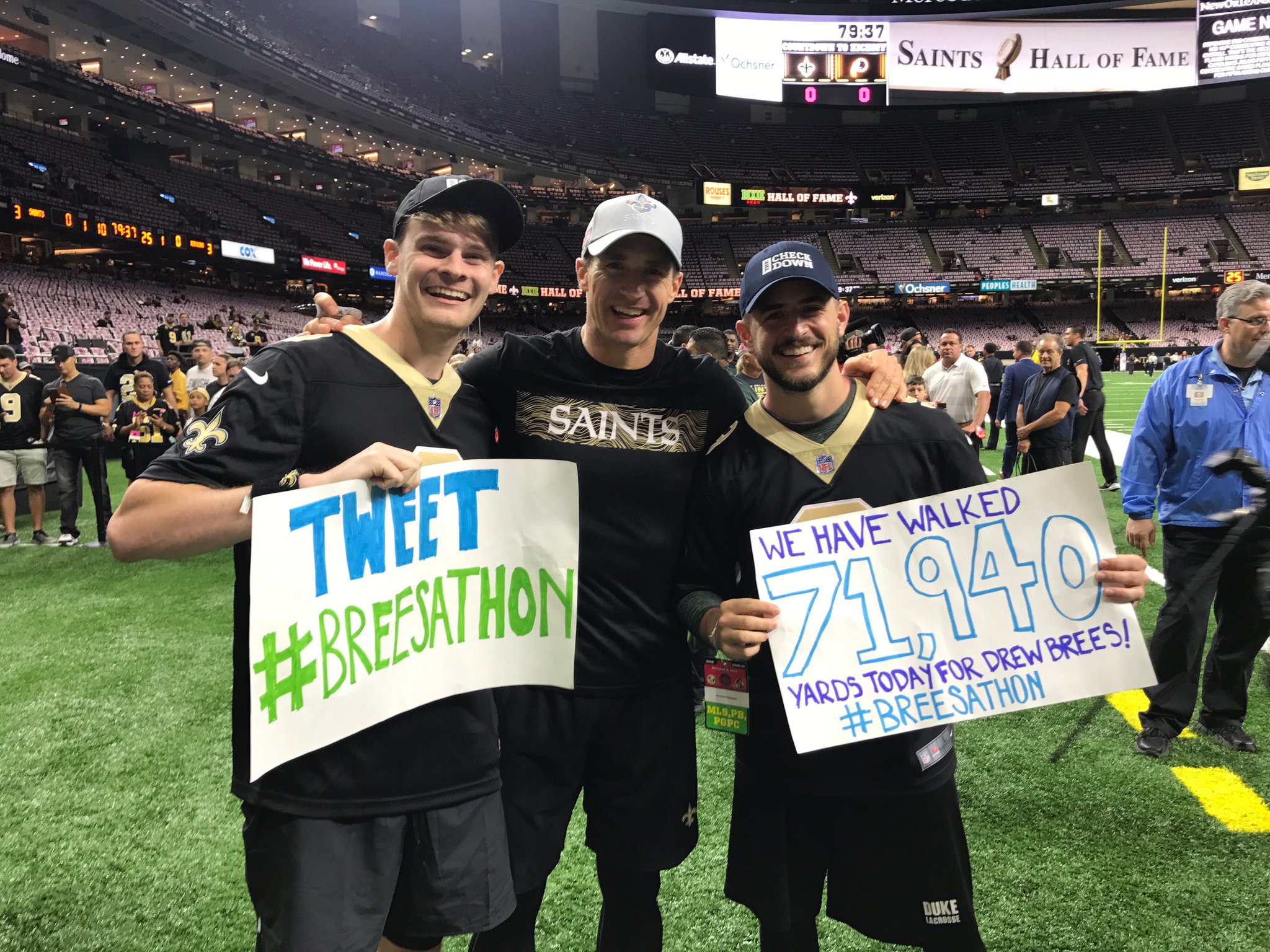 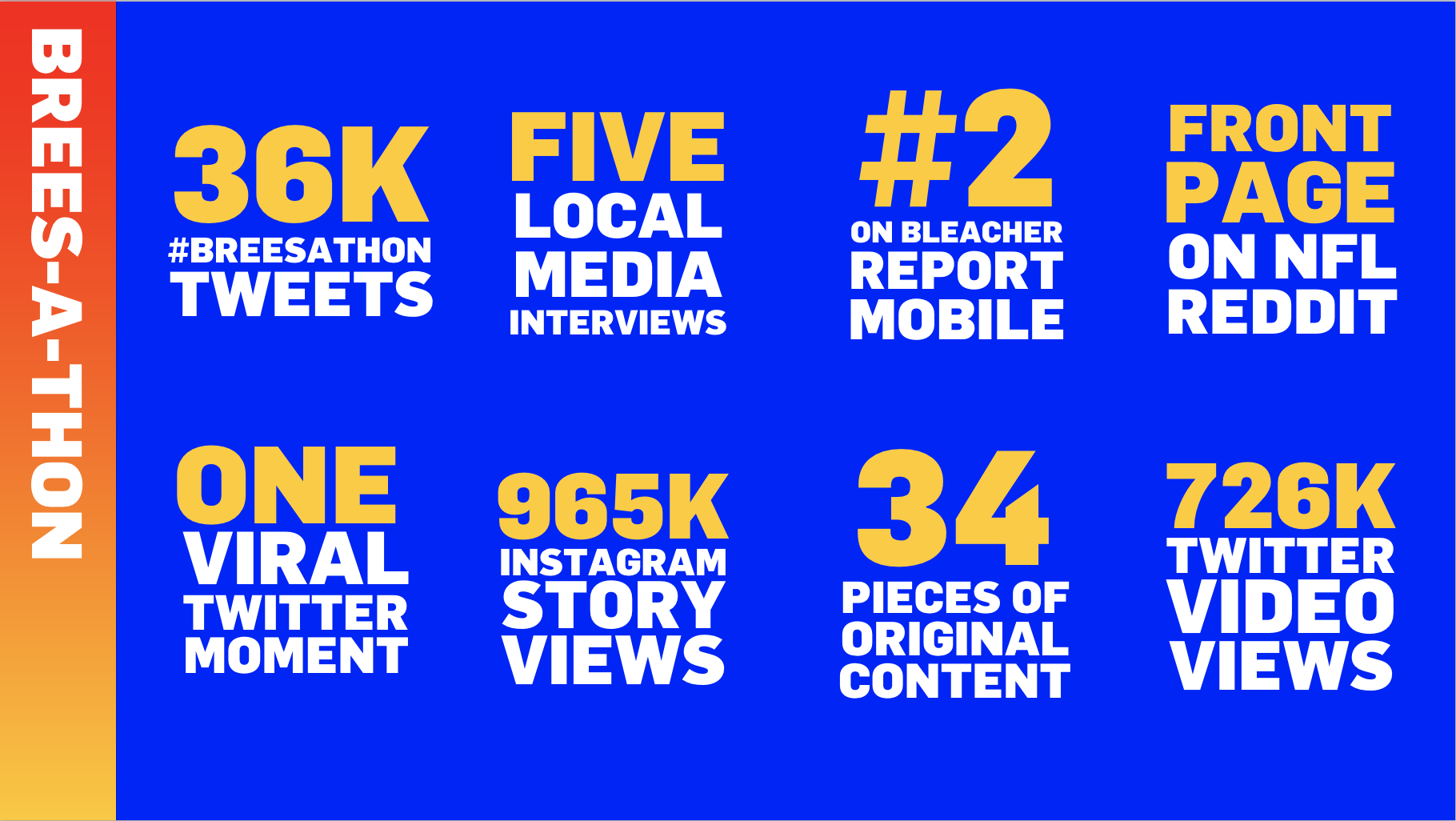 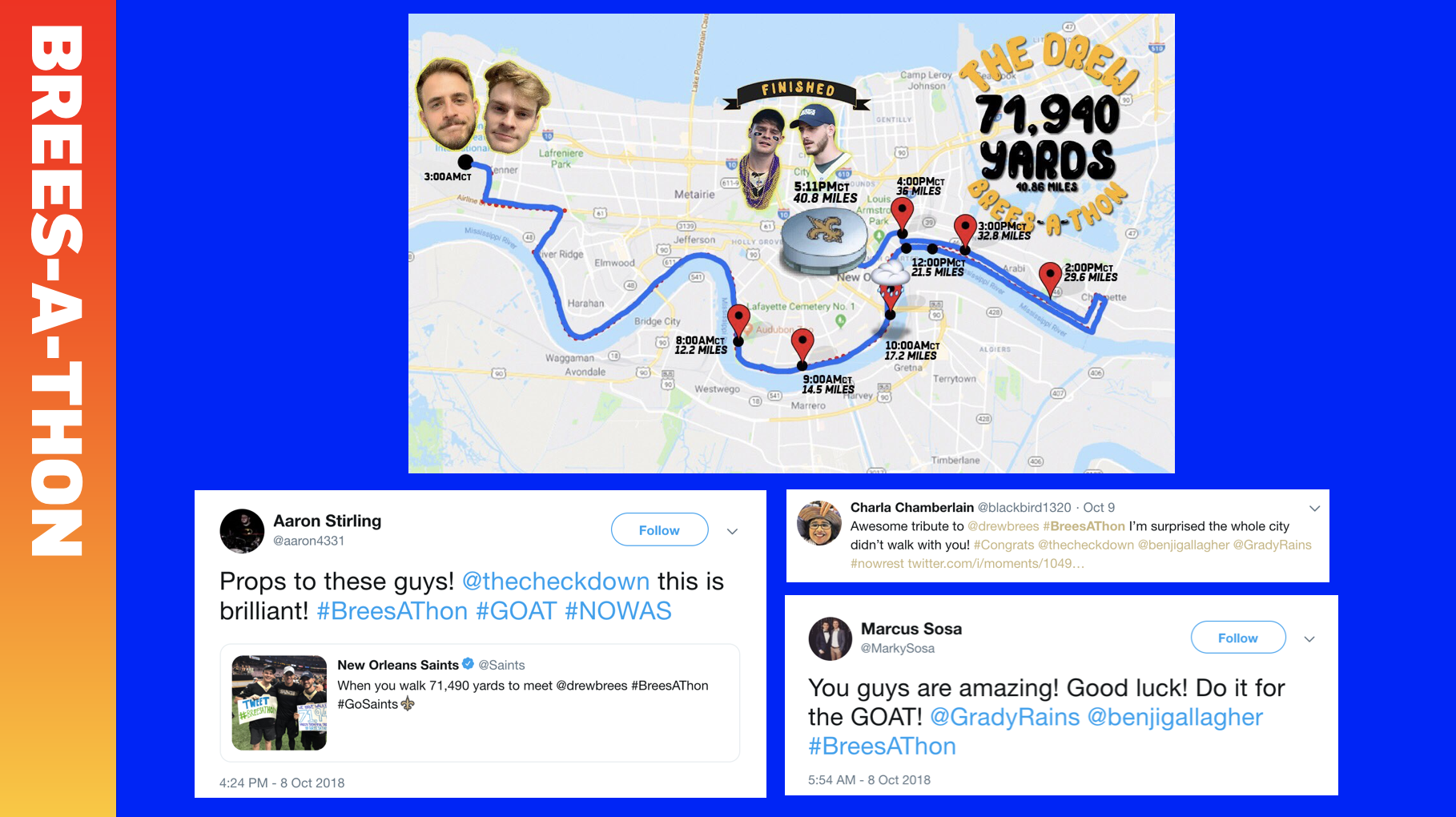 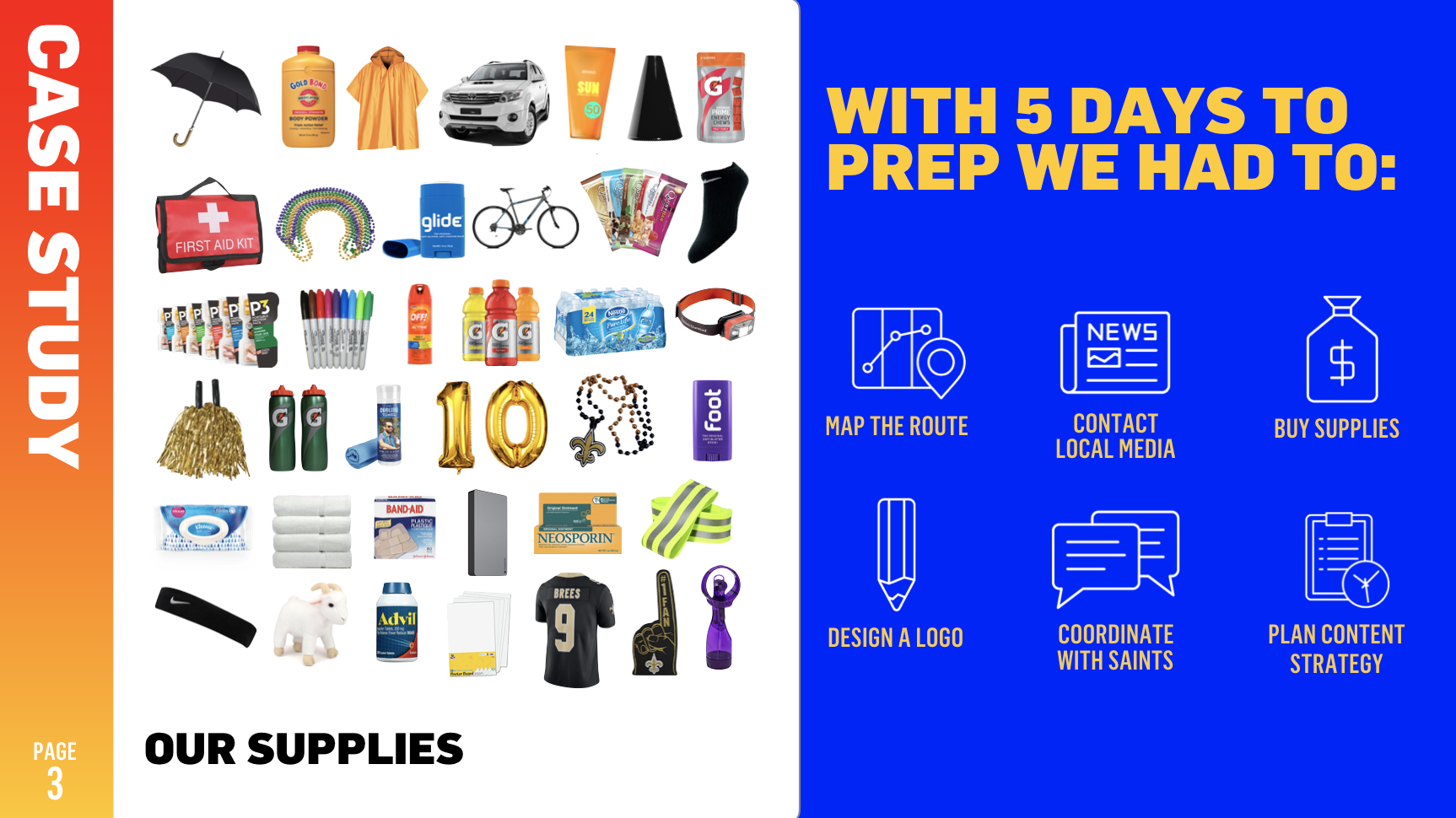 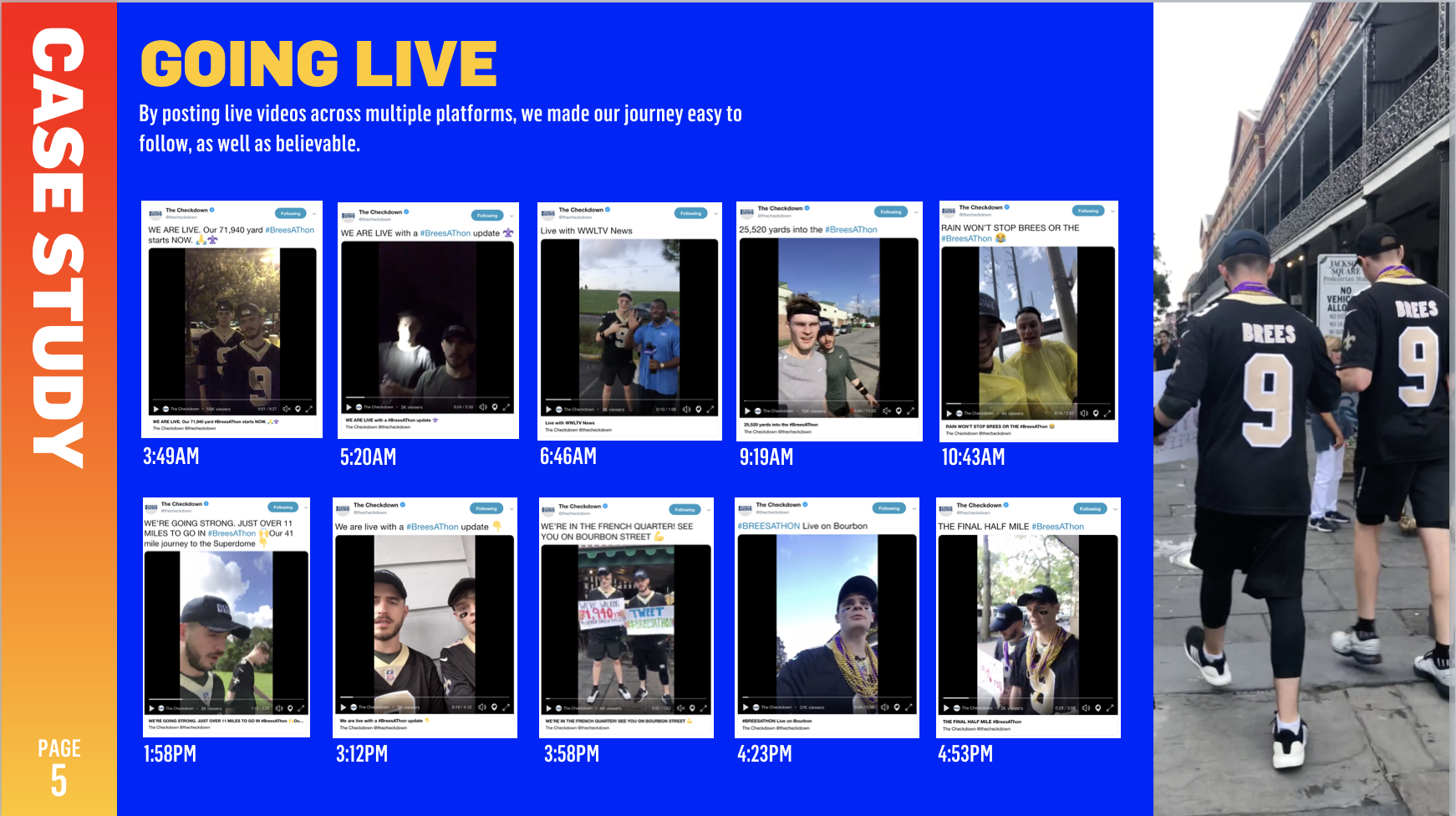