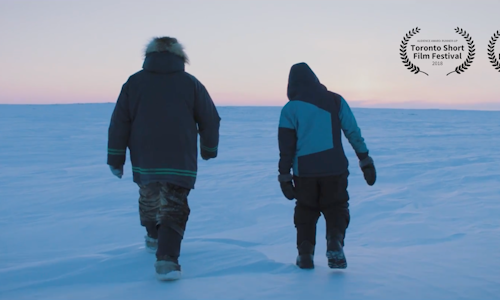 In the Inuit Nunangat region of Northern Canada, suicide rates range from 5-25 times the national average. The highest risk group is Inuit males aged 15-29, with rates almost 40 times the national average. In light of this, the Movember Foundation is funding a bespoke program to address this crisis. This short film, The Boys of Nunavut, shows the program in action, and what it means to be a part of it.


Why does this entry deserve to win?

To explore and demonstrate the effectiveness of land-based programs in improving mental health & wellbeing, the Movember Foundation has funded a Circumpolar program in Northern Canada. A team led by Michael Jong from the Labrador & Grenfell Health Authority and Gwen Healey from Qaujigiartiit Health Research Centre worked with six community sites to implement and evaluate a variety of initiatives. The program takes at-risk youth out on the land with an experienced hunter who teaches traditional Inuit skills and knowledge to live off the land. The participants learn resilience and self-dependence and through this experience strengthen the ties to their cultural heritage and community.

Boys of Nunavut is a powerful, moving and necessary documentary about the mental health crisis taking place situated in Arviat, Nunavut. Director Andrew Maguire's film shines a light on this issue caused by the loss of identity as a result of assimilation, and the hope that is the Young Hunters Program, an initiative created by community members to help at-risk youth.

The project is showing considerable promise as a means of addressing the needs of young men and boys. Against a backdrop where 1 in 200 young people take their life each year, not one participant in the Young Hunters' Program has been lost to suicide since the project began.

Video for BOYS OF NUNAVUT