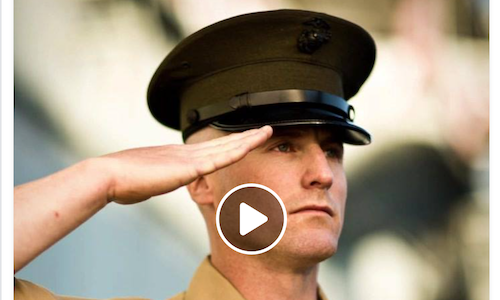 USAA's Veterans Day objectives were to drive awareness of the meaning behind Veterans Day and increase favorable brand opinion of USAA with both the military community and general public.

Twenty million veterans live among us, each armed with their own story. While all took the same oath of service, their reasons for making the sacrifice are entirely personal, valuable and worthy of our gratitude.

This Veterans Day, USAA asked Americans do more than say thank you to our 20 million -- we asked them to show it. There are twenty million veterans and 20 million reasons to honor them.

USAA centered its 20 Million Reasons campaign around #HonorThrough Action, which allowed for a rich storytelling experience on 20MillionReasons.org and on social media.

We inspired audiences through short - form social videos that led to long -form videos hosted on YouTube and embedded on 20millionreasons.org. Videos focused on the stories and lives of vets ranging from a combat photographer who honors veterans by capturing their photos to a Vietnam War veteran who encourages employers to give veterans a chance after serving in the military to a WWII veteran who wants people to help older veterans in any way they can. These social videos were cut for each platform— Facebook, Twitter, Instagram and Snapchat — and directed users to the 20millionreasons.org site to learn more, share their stories of service or take action through donations or volunteerism at a number of veterans organizations.

This inspiration spurred others to honor and share their own stories of service, or stories from their friends or relatives. Users were able to submit their powerful stories through text and photo submissions and share them through a beautifully created piece of social currency on their profiles.

As Veterans Day approached, users were able to update their social profile pictures through Facebook Frames, Twibbon pics, and Snapchat geofilters that honored our 20 million vets.

To extend the reach of the campaign, we partnered with affinity partners like Team Rubicon, Paralyzed Veterans of America, United Service Organizations (USO), Wounded Warrior Project, The American Legion, and others. This allowed audiences to go above and beyond and really show #HonorThroughAction.

The campaign had approximately 379MM potential impressions with 5K total mentions and over 16K engagements on social media. Additionally, the microsite garnered over 300 unique Veteran stories that will be showcased throughout the year. 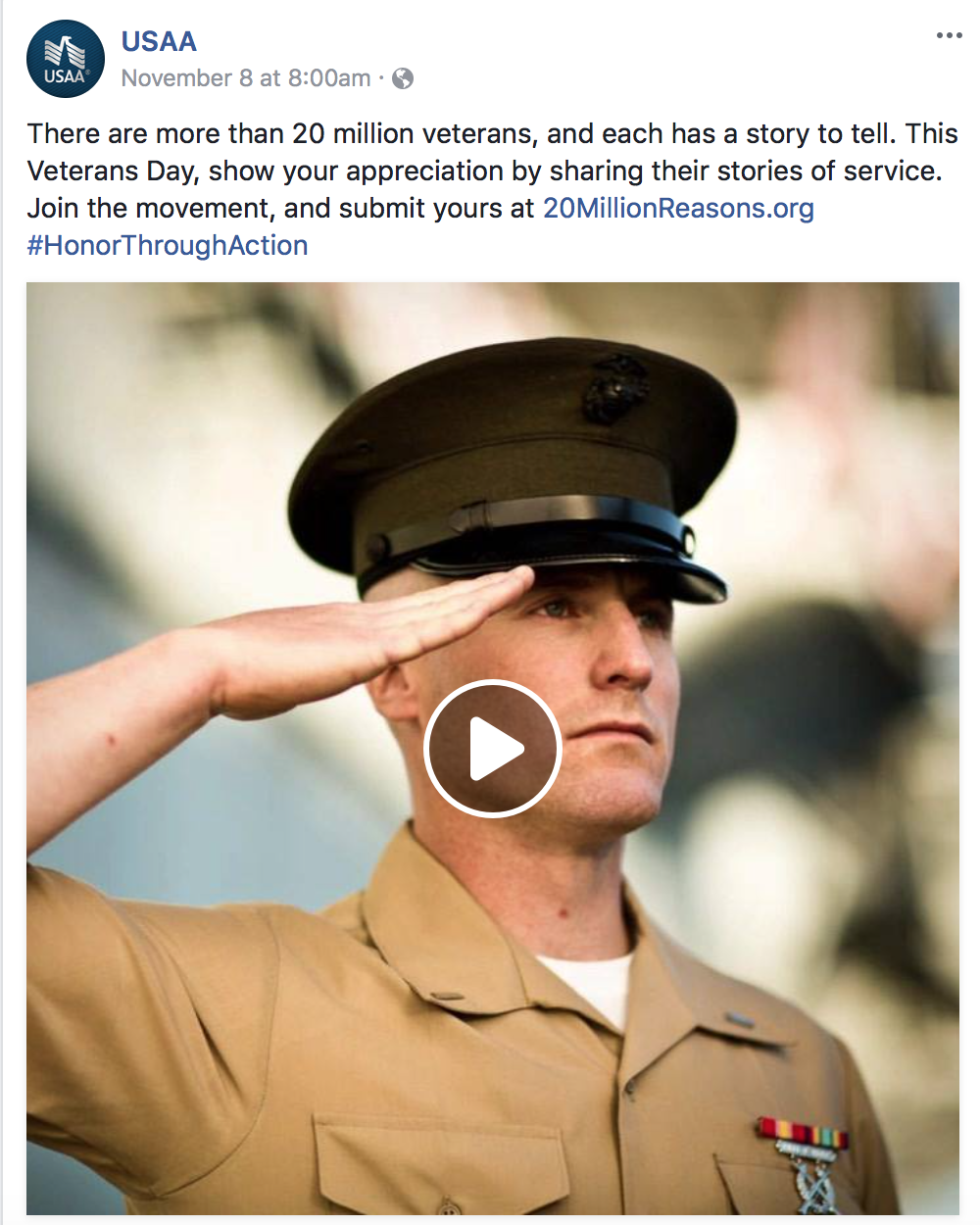 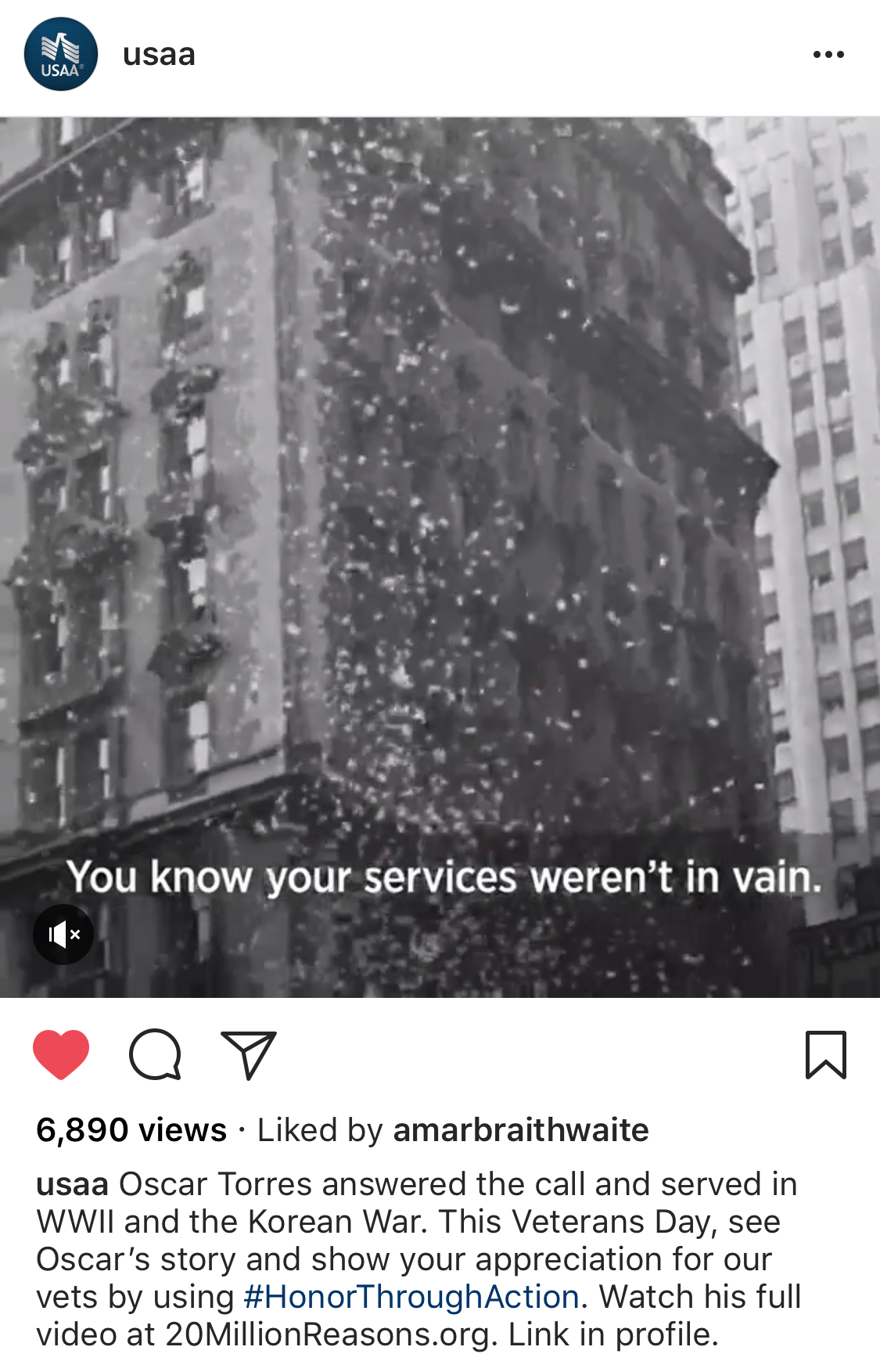 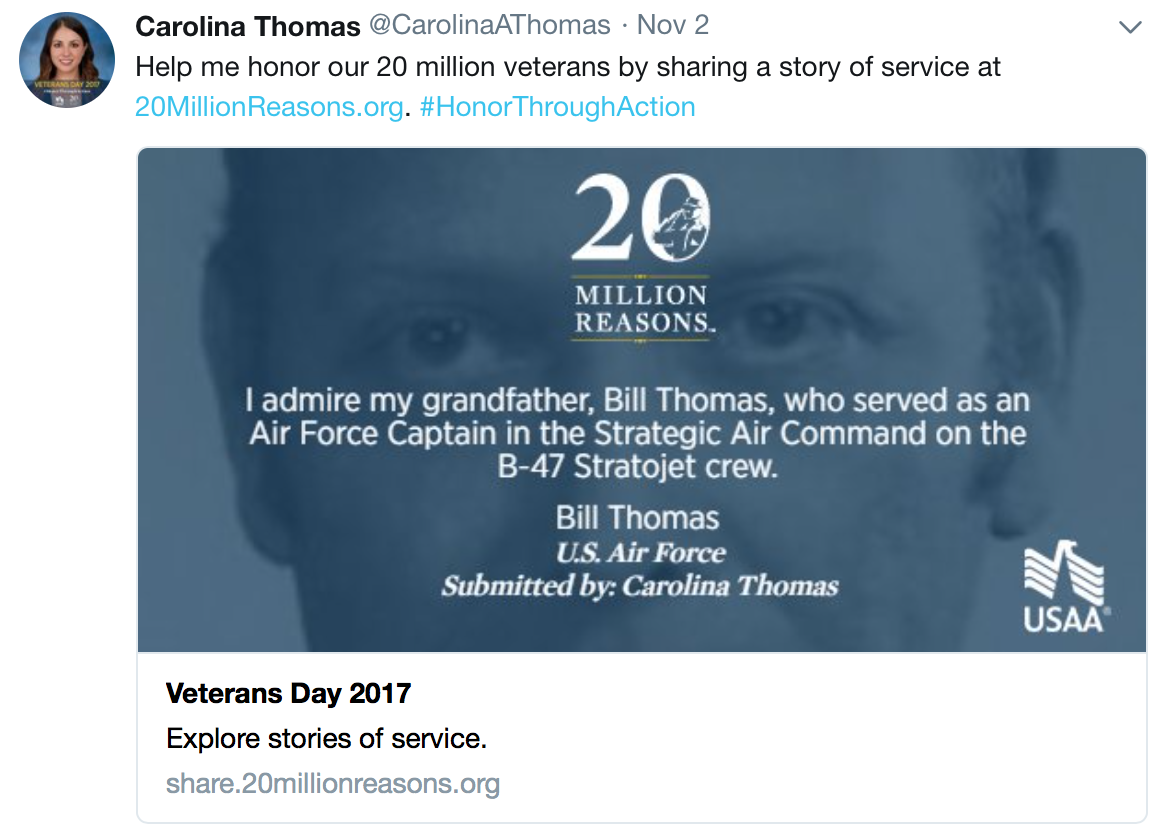 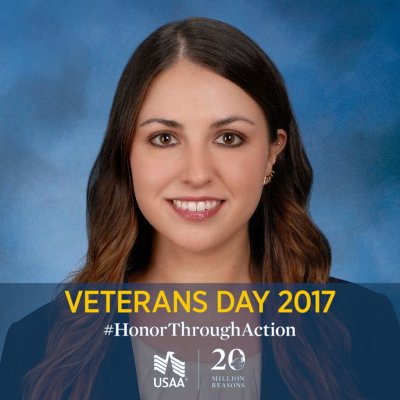 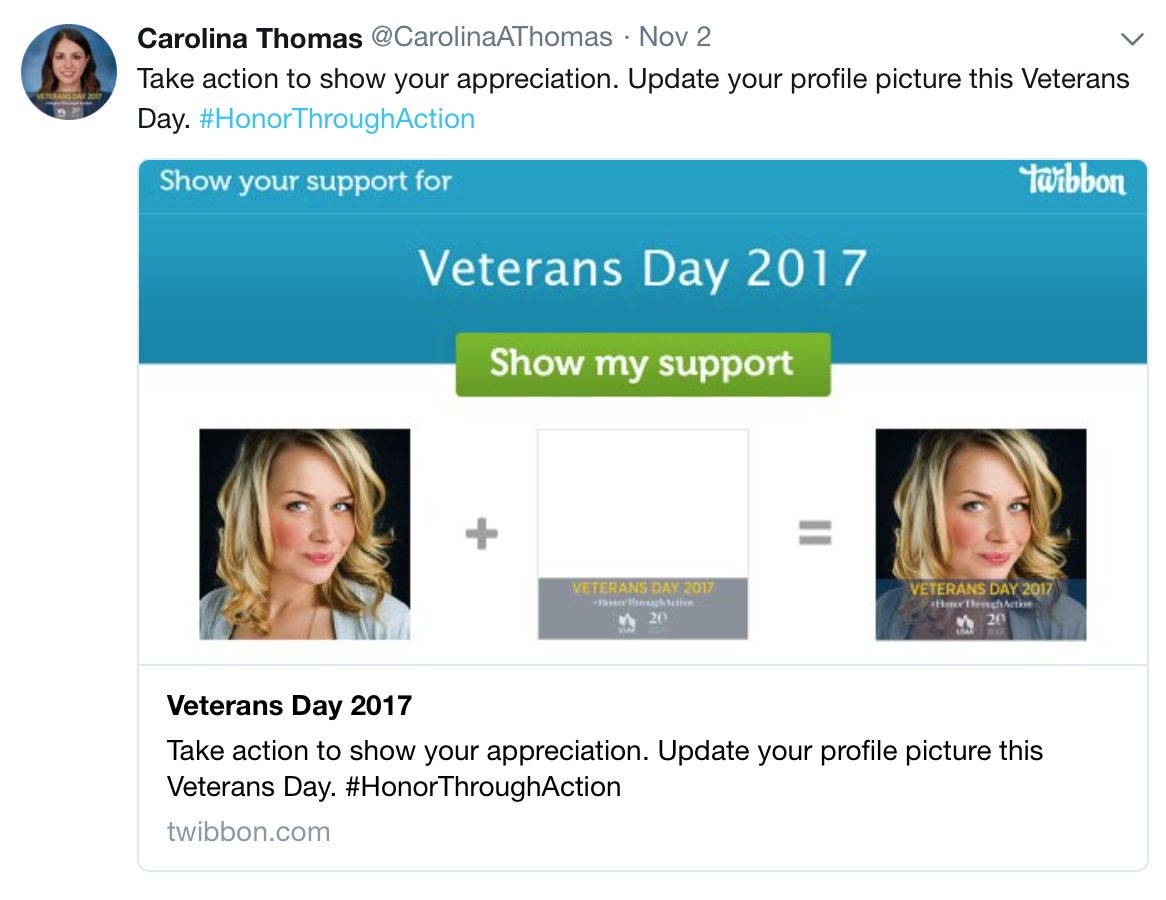 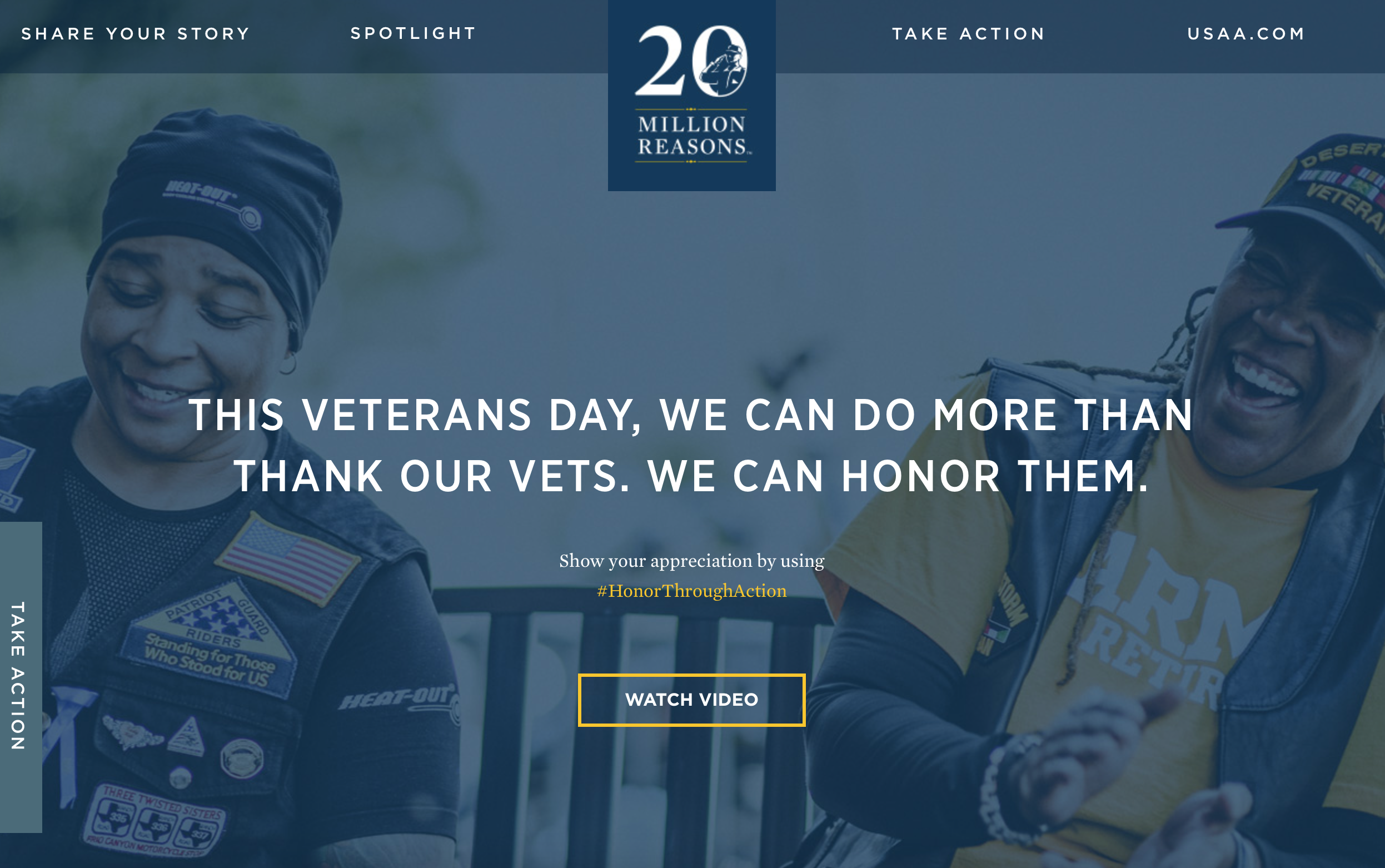