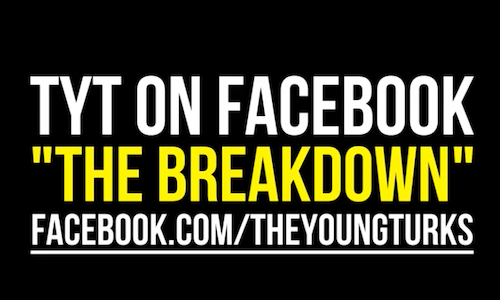 Faced with a veritable barrage of round-the-clock news describing a world in a near-constant roil, today's online audiences are eager for content that breaks through the noise to distill the critical messages that expose the truth behind the headlines.

This is the driving force behind TYT Network's "The Breakdown" segments on Facebook. Whether discussing the spiraling disaster of the Trump presidency, police brutality against communities of color, the dramatic cultural impact of the #MeToo movement or the devastating war raging in Yemen, TYT's hosts deliver incisive, often biting and unabashedly progressive commentary on the day's most controversial subjects.

In addition to providing Facebook viewers with a key understanding of of the day's hottest trending topics, TYT's "Breakdown" segments also explain why those subjects matter with a level of unique insights and unfiltered, unapologetic opinions they won't find anywhere else, all communicated with an underlying passion and often ironic tone that entertains while it informs.

Hosts include: Hasan Piker, whose "takedowns" of right wing commentators, like Tomi Lahren and Ben Shapiro, have turned him into a genuine viral sensation, Francis Maxwell, a native Scotsman who's gained a wide and appreciative audience for his unique "outsider" perspective on racial issues in the United States, including Black Lives Matter, the NFL "Take a knee" protests and criminal justice reform, and Ana Kasparian who supplements her duties as a host of TYT's wildly popular daily online show with commentaries on Facebook exposing right wing dissimilation and bigotry.

No matter their political leanings, viewers come away from TYT's "Breakdown" videos knowing exactly where we stand, with the understanding that we will always speak the straight truth to power, give voice to marginalized, disempowered and excluded communities and advance an honest, progressive vision for a fairer, more just and compassionate society.

TYT's Facebook presence has skyrocketed over 75% this past year, with over 100 million minutes of watch time per month. Much of that growth has been fueled by our Facebook Original Content videos, where our roster of talented hosts provide insightful opinion, commentary and analysis on the most pressing issues of the day in a format that is optimized for the platform.