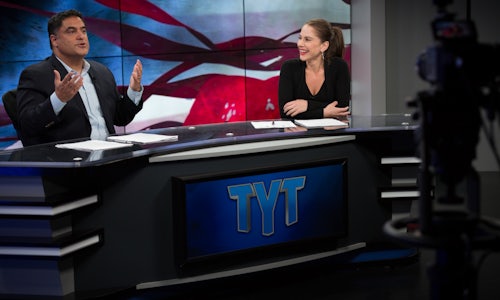 The Young Turks recently celebrated 12 years of livestreaming on YouTube, making it the longest running show online. The daily show, covering news and politics, prides itself in speaking truth to power and delivers the news, "To pursue truth, drive social change, and become a digital campfire around the world."

Not influenced by what mainstream media news outlets cover, The Young Turks places the issues that matter to Americans as their priority. They shed light on issues related to police brutality, education, healthcare, and break down any policies that will negatively impact individuals, among other important subjects.

For example, The Young Turks covered reports by TYT Investigates which explained issues related to corporate power and inequality. They focused on uncovering the truth behind the Republican tax bill and who it will benefit. They covered stories on how companies, like Apple, FedEx, and UPS, would not be creating more jobs despite the tax cut.

Viewers have made The Young Turks a household name in online news and they have the ability to engage with the hosts during the live show, by using #tytlive on Twitter to share their opinions and reactions to stories.

According to comScore, TYT is one of the top performing YouTube channels and remains #1 in multi-platform views in news and politics - information among millennials (18-24).

Their style of commentary and the diversity of topics they cover engages millions of viewers and has allowed them to be the top source for news and politics online.