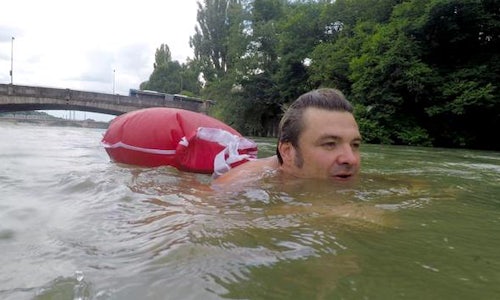 The man who swims to work

To put it simply, commuting is a pain. Traffic, combined with the high costs associated with transportation, are enough to make anyone jump into a river – and that's exactly what one German man did.

At BBC Capital, we showcase the surprising, smart ways people around the world balance work and life. For this video, we wanted to tell the story of one enterprising employee's quirky, eco-conscious and healthy solution for a problem with which we can all relate: the daily commute to work.

It's one thing to tell a story, it's another to show it in all its unadulterated glory.

We followed Benjamin David as he prepared for his workday – a process quite unusual for the average 9-to-5 employee. Our goal was to not just show the atypical nature of his daily commute, but to get to the heart of his reasoning for such an unorthodox mode of transportation. We aimed to find out how he prepares for his daily swim, what sort of inventions were necessary for him to haul his things to work (a standard briefcase, we knew, just wouldn't do the trick), and understand how the whole experience affects his body and mind. Additionally, we wanted the viewer to see that Benjamin isn't an Olympic swimmer – he's a regular guy just trying to get to work in a less stressful way than the traditional automotive form of transportation offers.

Our profile was so well received that media outlets around the globe hurried to recreate this story, many of them simply lifting our original video and repurposing it.

The link to our original video on BBC.com was shared more than 31 thousand times on Facebook alone. Our Facebook cut-down was viewed more than 8.3 million times and shared about 64,000 times, reaching more than 21 million people. Multiple media outlets around the world – Time, Huffington Post, Reuters and the Washington Post, to name a few – have since replicated our story.

Video for The man who swims to work 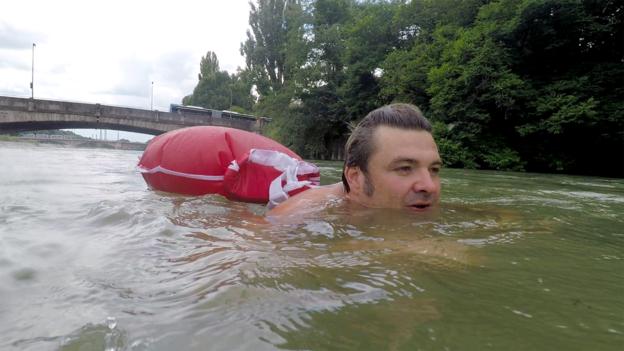