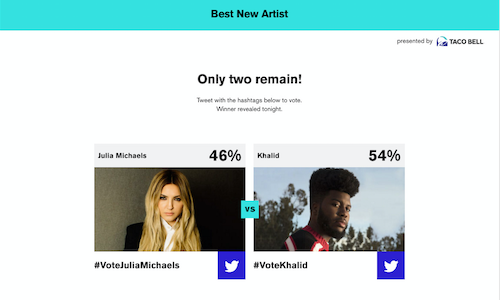 Taco Bell has a longstanding history of supporting music and emerging artists from their early days through their rise to stardom. At the 2017 MTV VMAs, Taco Bell's main objective was to reinforce their association with music discovery by sponsoring the Best New Artist award. From the launch of the program to the live VMA broadcast, Taco Bell tasked MTV to drive fan engagement around the category and to create an interactive and rewarding experience for viewers during the award show.

Prior to the show, we sent out a targeted tweet to fans who had previously voted in the category, encouraging them to tune-in to the VMA Pre-Show to find out the top two nominees in the category. Then live from the Red Carpet, we announced Khalid and Julia Michaels as the finalists on air, calling on fans at home to vote on Twitter throughout the show using #voteKhalid or #voteJuliaMichaels for their preferred artist. To reward fans for participating, we pre-recorded "thank you" videos from each of the nominees and worked with Twitter to target the users who participated in hashtag voting, so that they each received a tweet of the "thank you" video from the artist they voted for.

To continue engagement throughout the show, we employed additional tactics on air, on MTV.com and on Twitter. Throughout the main VMAs broadcast, we aired 3 moments in the middle of the show calling on fans to participate in hashtag voting up until the final segment before the award was announced. Each of these on-air voting calls to action additionally drove viewers to MTV.com, where fans could view a live visualization that was tracking the real-time results of the hashtag voting and create a sense of urgency for the losing artists' fans. Our final tactic consisted of creating 3 Conversation Card tweets, that allowed users to vote at the click of a button through our pre-composed copy. These three Conversation Cards were then amplified throughout the show to MTV followers as well as other relevant Twitter audiences, such as Khalid's and Julia Michaels' followers.

As the culmination of all of aforementioned tactics, the category received over 141k total hashtag votes, over 800k engagements and more than 78M social impressions.

Throughout this program, Taco Bell was woven in every step along the way. Each piece of content we created contained at least one of the following: our cobranded #liVeMAs hashtag, Taco Bell logo, Taco Bell verbal mention or @TacoBell tag on Twitter. With all of these branding points, we were able to fully integrate Taco Bell into this campaign and reinforce their dedication emerging artists and the Best New Artist category. And furthermore throughout VMA night, #voteJuliaMichaels and #voteKhalid were two of the top trending topics on Twitter with 43% of those tweets incorporating the VMA and Taco Bell cobranded hashtag #liVeMAs, further reinforcing Taco Bell's association with the category and showing how engaged viewers were with the Best New Artist campaign. 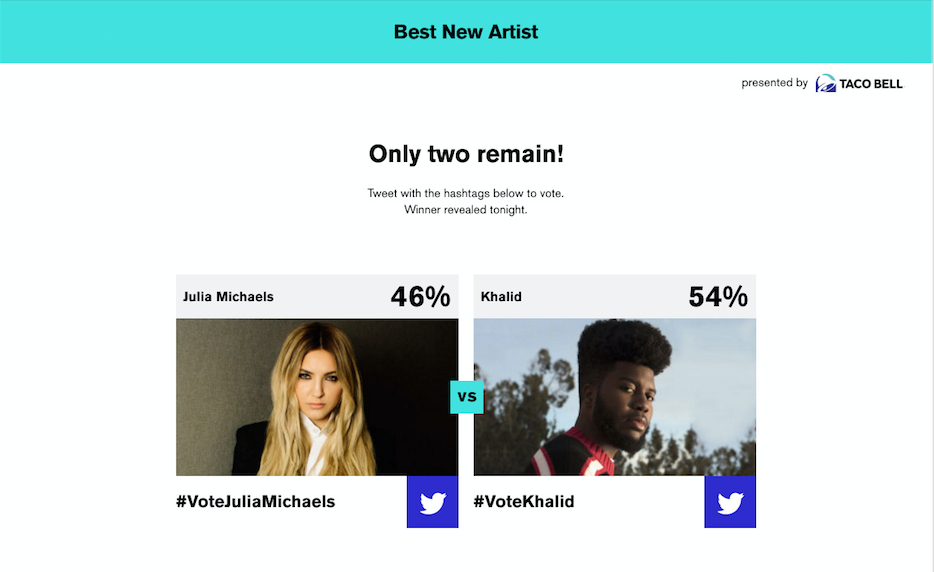