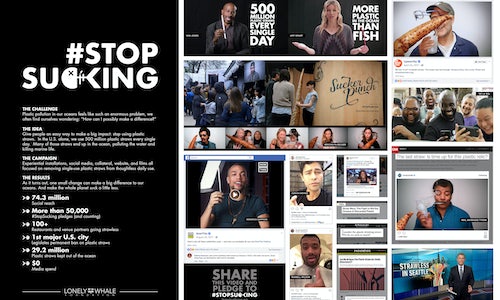 Our objective was to reduce the number of straws used in the country this year, with the hope of earning a permanent & sustainable way of retaining that reduction.

We set out to earn reach and engagement through an social activation (goal: 10MM reach), followed by acquisition of key bars and restaurants in a single city (goal: at least 10 partners.) We also monitored the number of people who pledge on social media to stop asking for plastic straws.

In one summer, our #StopSucking campaign turned the plastic straw into environment enemy number one. With $0 spend, our total media impressions topped 831 million. #StopSucking launched with Sucker Punch, a live SXSW experience that transformed participants into ocean health activists with a single smack . . . from an octopus.

Our organic #StopSucking content saw a social reach of 74 million with an equivalent media spend of $515k. In just three months, #StopSucking gained notoriety from media ranging from The New York Times to Huffington Post to Fast Company — and influenced true policy change. The city of Seattle became the first major market to pass a permanent ban on plastic straw use. (More cities are following suit.) Across the country more than 100 restaurants and venues have pledged to go strawless. Most importantly, 30 million straws were kept out of the waste stream. And we're just getting started.

The ocean plastics problem feels overwhelming because we don't know where to start with such a huge challenge. And the "start" is often posed by most environmental campaigns as fully adopting a lifestyle that's impossibly inconvenient: Switch to a Prius. Compost everything. Remember to bring a commuter mug everywhere you go.

We knew we had to identify a start that was prioritized by ease not volume impact.

While microplastics only represent 13% of plastics in the oceans (by weight), the single-use plastic straw is one of the most frequently encountered and used plastic, giving us a clear path to a way for people to make a daily impact on the ocean plastics problem.

In the U.S. alone, we use 500 million straws a day. They are typically made of petroleum-based plastic polypropylene which is not commercially recyclable. We rarely reuse straws. Many end up in the ocean, harming marine and aquatic life.

And the reality is, most of us don't even need them; restaurants and bars often place them in our drinks without us asking for them. We didn't need people to become environmentalists, we simply needed people to stop using plastic straws.

Our strategic big idea: Empower people to improve our ocean's health by going without something we encounter every day: the plastic straw.

We significantly outpaced our reach goals with our Sucker Punch social activation. Despite being 100% organic content, we exceeded our 10 million reach target to earn a reach of over 74.3 million people across Twitter, Facebook, and Instagram. We saw commitment from people too: the #StopSucking work earned over 50,000 pledges from people across the country to stop using plastic straws.

These pledges resulted in 29.21 million plastic straws kept out of the waste stream based on average use.

The reach we garnered from the Sucker Punch content had the equivalent in media spend value of $514,907.

What was particularly validating about the #StopSucking Challenge was seeing how it crossed all segments of culture, from sports to entertainment to food and beyond. #StopSucking began to get picked up by other foundations and other organizations have been co-opting the hashtag for their own straw-free initiatives.

The blend of content that traveled beyond a traditionally environmentally-focused audience, our presence at SXSW and the reach of celebrity partners moved the message out of the echo chamber and into a broader popular awareness (i.e. Mashable), ultimately empowered and strengthened by other NGOs.

This expanded audience gave license to publishers like Mashable, Fast Company, and US News to showcase the work, adding fuel to our efforts. 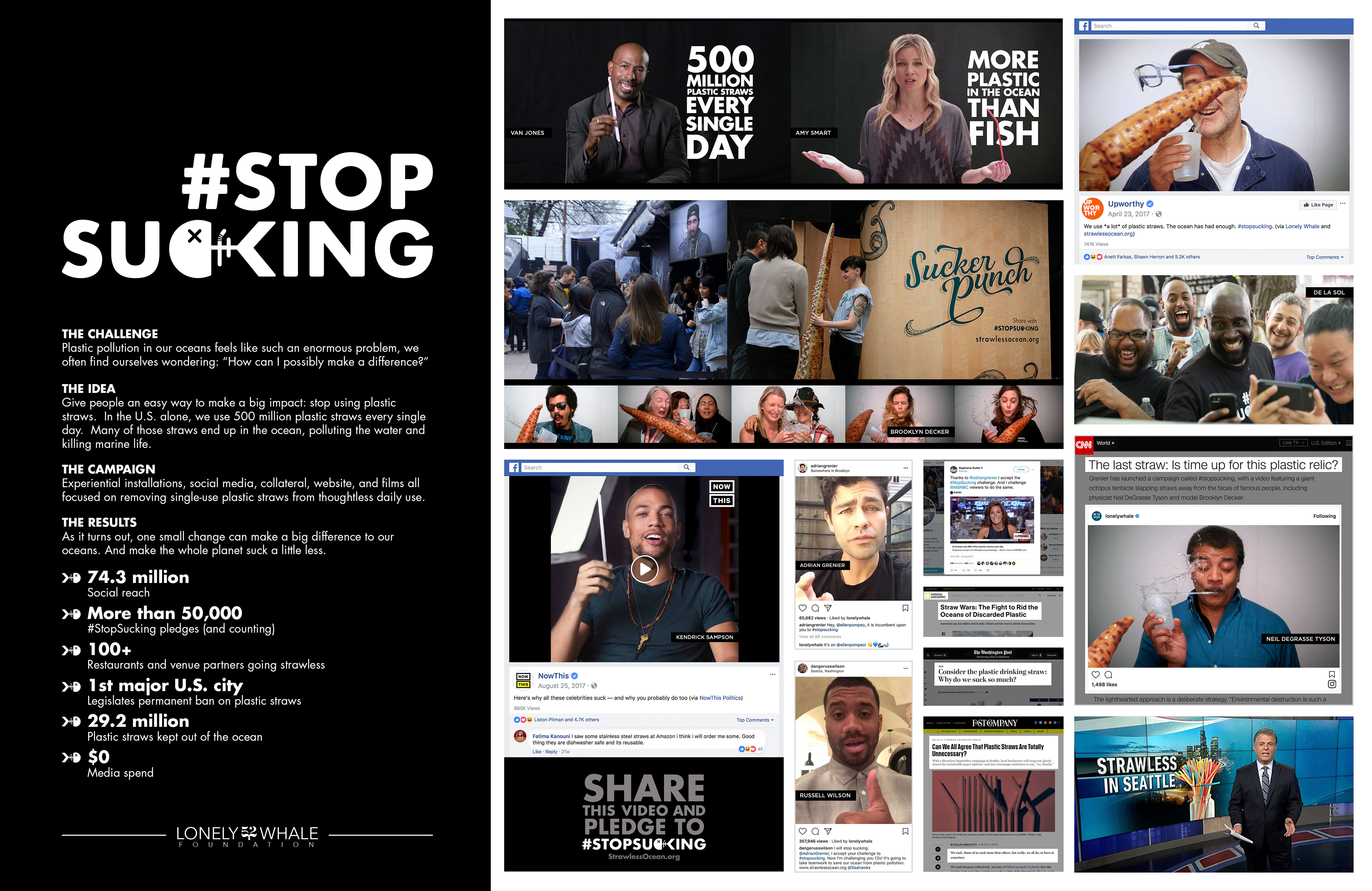 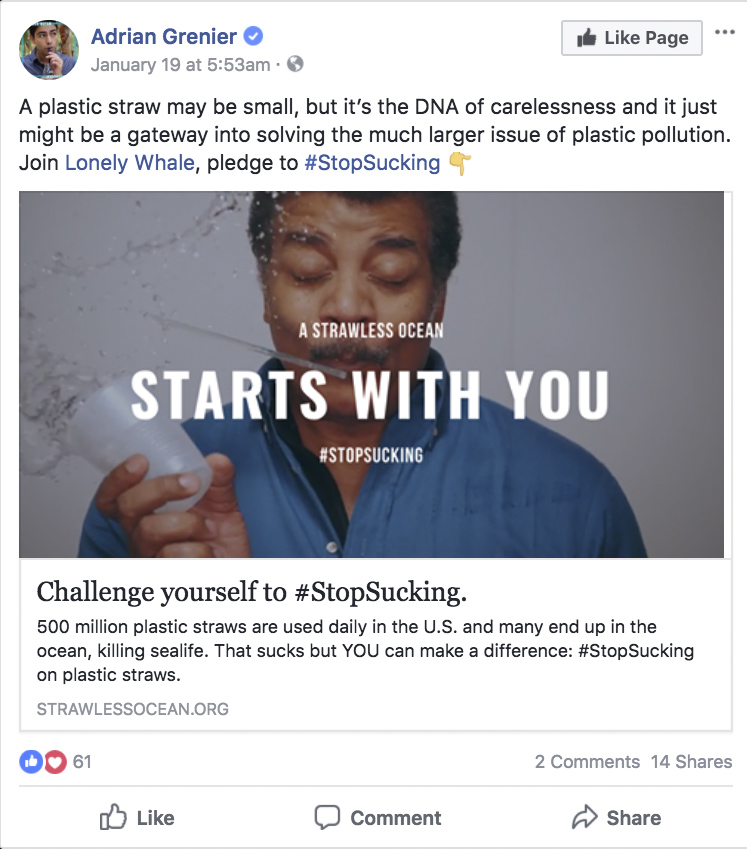 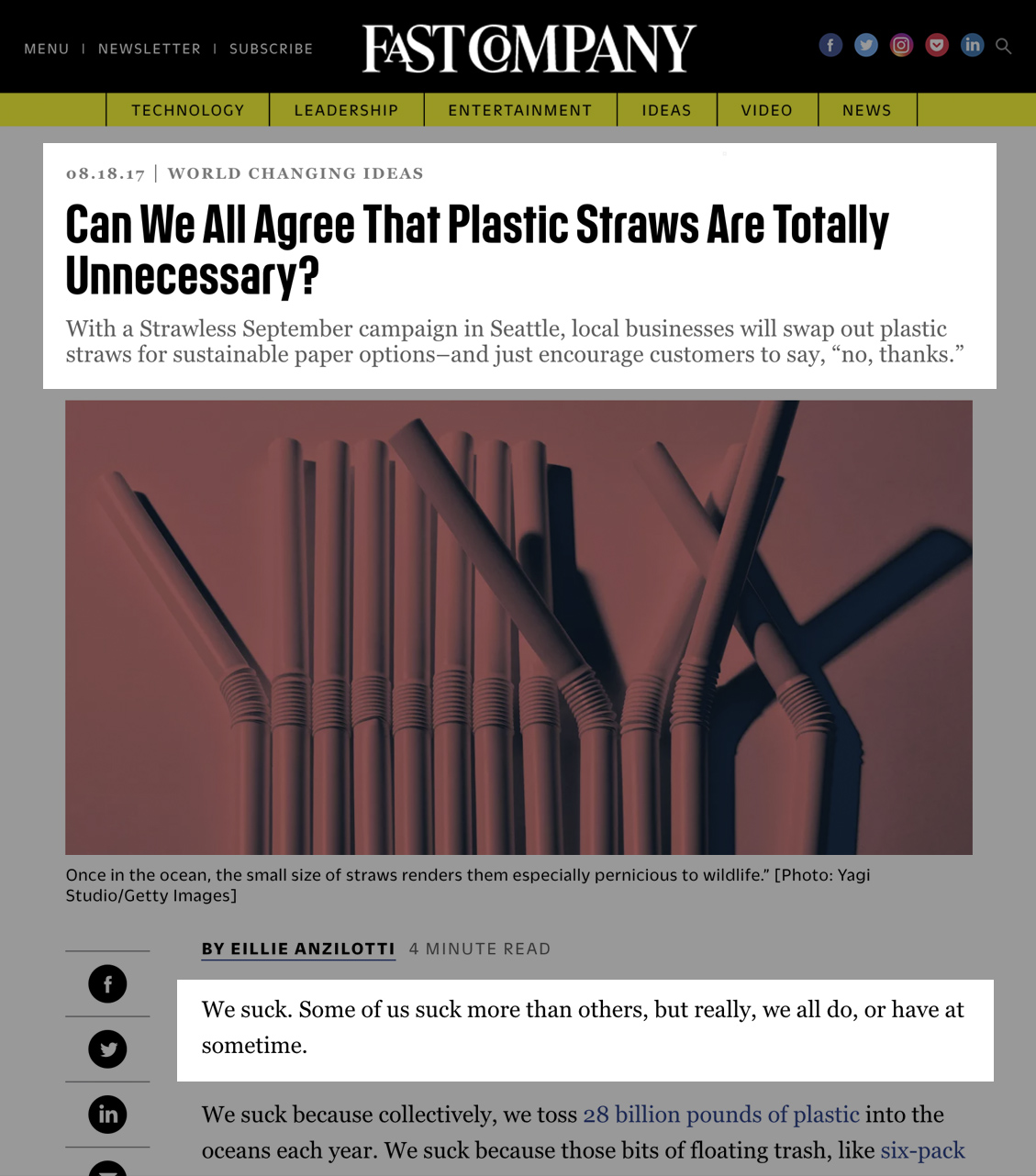 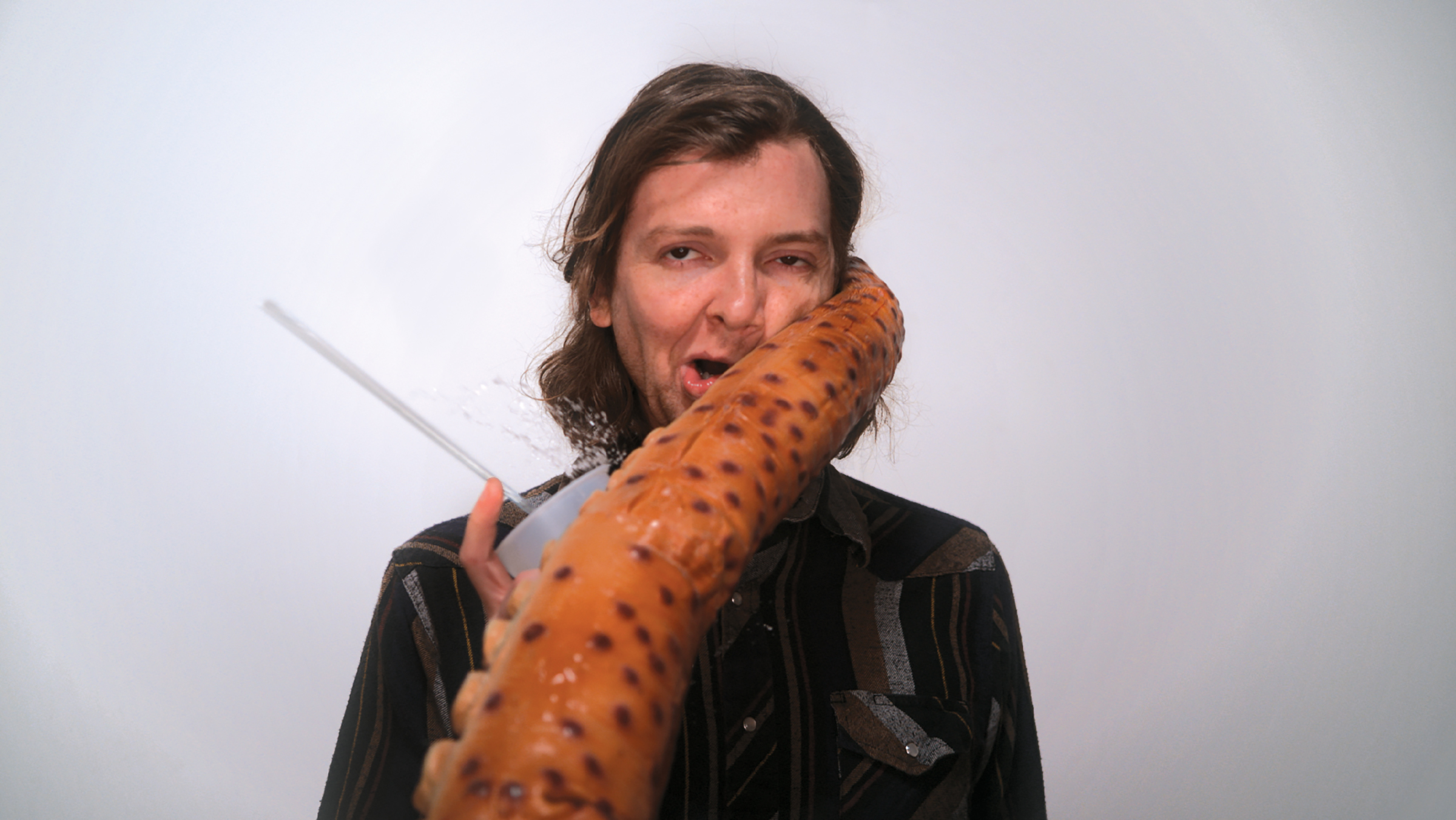 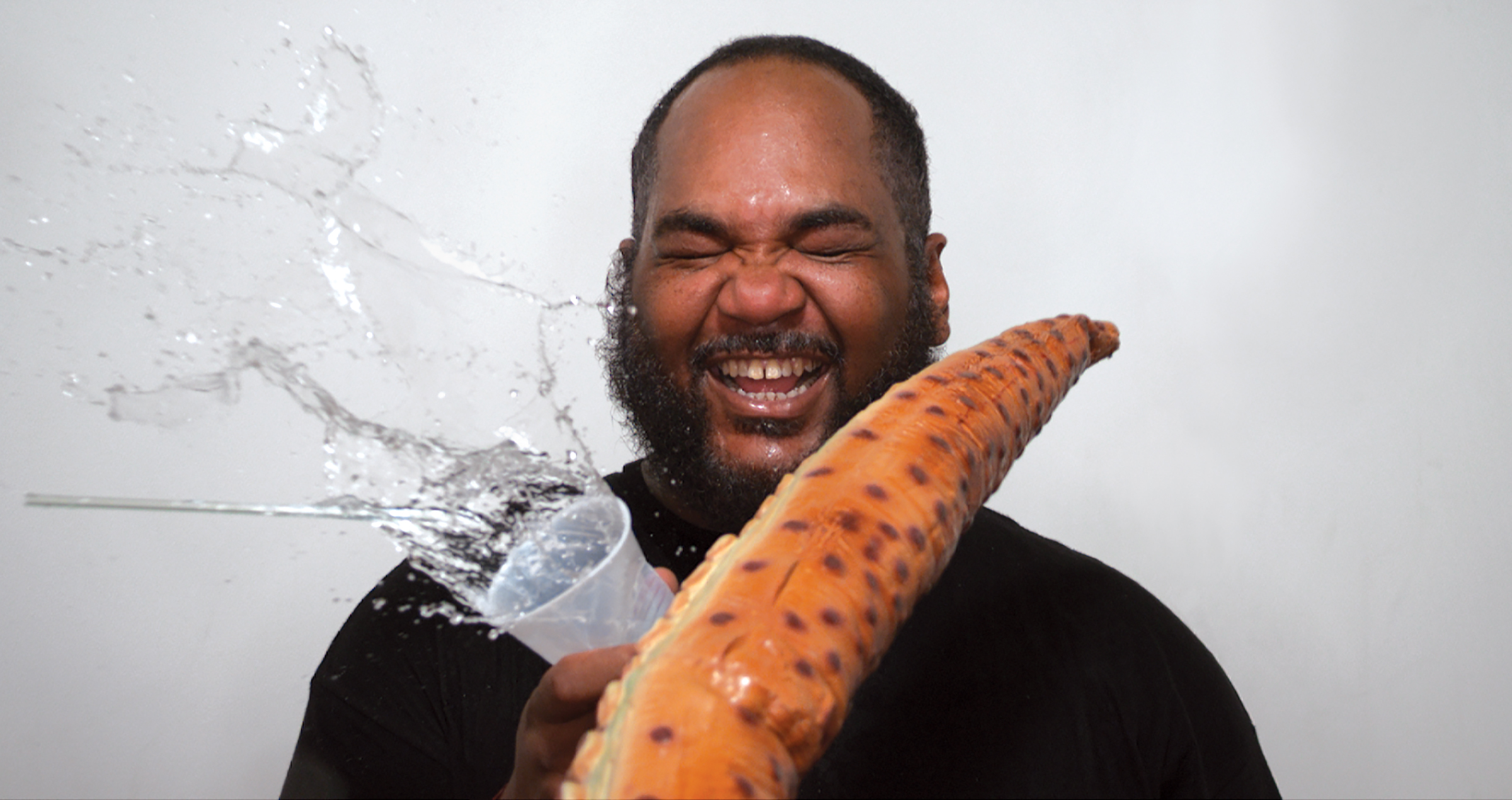