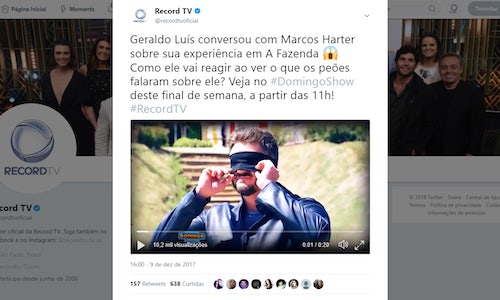 Our goal was to match two of our most successful endeavours: the fact that RecordTV already was known for being really good with Twitter (which gave us a Shorty and some cases among finalists); and the fact that we are the second biggest TV broadcaster in the country, one of the best on the southern hemisphere (and, therefore, a major video producer). The amount of own, fresh content we produce and air every day is astonishing – and so are our numbers on Twitter. We aimed to merge them into a strong, solid case.

First step of the strategy was to establish where we were so far. With around 25 MM following our accounts (the top one being @recordtvoficial), we had a huge crowd to please. At the same time, we have a specific team handing our social media every day – and a considerable amount of that time dedicated to livetweet the shows we're airing, almost 24/7.

Being long-time partners with Twitter here in Brazil, our accounts were already allowed to post up to 10 minutes-long videos.

For 2017, we increased that team – summing up to 30 people – and invested also in increasing the amount of video content being published every day. We are currently using a tool called SnappyTV, that allow us to crop and publish the TV content, in real time, for Twitter. Almost simultaneously, the TV content is uploaded on our accounts, allowing anyone, with or without a TV, to be a part of the conversation and consume our shows.

That strategy was developed while having in mind that we had boost our numbers, improve the user experience and reach more people. It also would gave us a bonus: every Twitter Moment created about our shows, or using our content (which is common with the News segment) would come out more complete, with richer media and more useful to Twitter users.

The staff in charge of the video cropping in real time was also trained and instructed to get the best of each content: the best cut, the most dynamical length for each content, the right way to prioritize what's trending and such.

That work scheme was part of a bigger picture, that included our crossmedia strategy for broadcasts, operated in real time. This gear, if well-placed in a larger machine, would guarantee us the results we were looking for. That established, we put it to use, for the entire year: video would represent at least 4/5 of what we tweeted in our accounts.

We have reached the Twitter Trending Topics in Brazil almost every day, getting to the Worldwide list from time to time. We started to figure more and more on the Twitter Moments the platform created itself, and our timelines have gotten way richer when it comes to the content and the user experience. News programs spread content faster and faster, and our entertainment shows allowed users to consume the best parts, the key moments, directly inside the platform.

Down to the numbers. Our engagement got astonishing: we had 87,9 MM impressions on our Twitter accounts in October 2017. Our top account in the month, @fazendarecord, was responsible for 35 MM of that total. During the whole year, until the end of November, all of our accounts combined (we have 37, one for each of our TV shows and one for the TV station overall) summed up 679.6 MM impressions. And we published 107 K tweets so far – which gives our company an average of 6.3 thousand impressions per tweet. On @fazendarecord, we have an average of 35 K impressions per tweet in 2017 (90 M impressions, on 2.5 K tweets).

A strong presence, that kept us as one of the leading content producers in the country and responsible for some of the most discussed events on the platform here in Brazil in 2017. 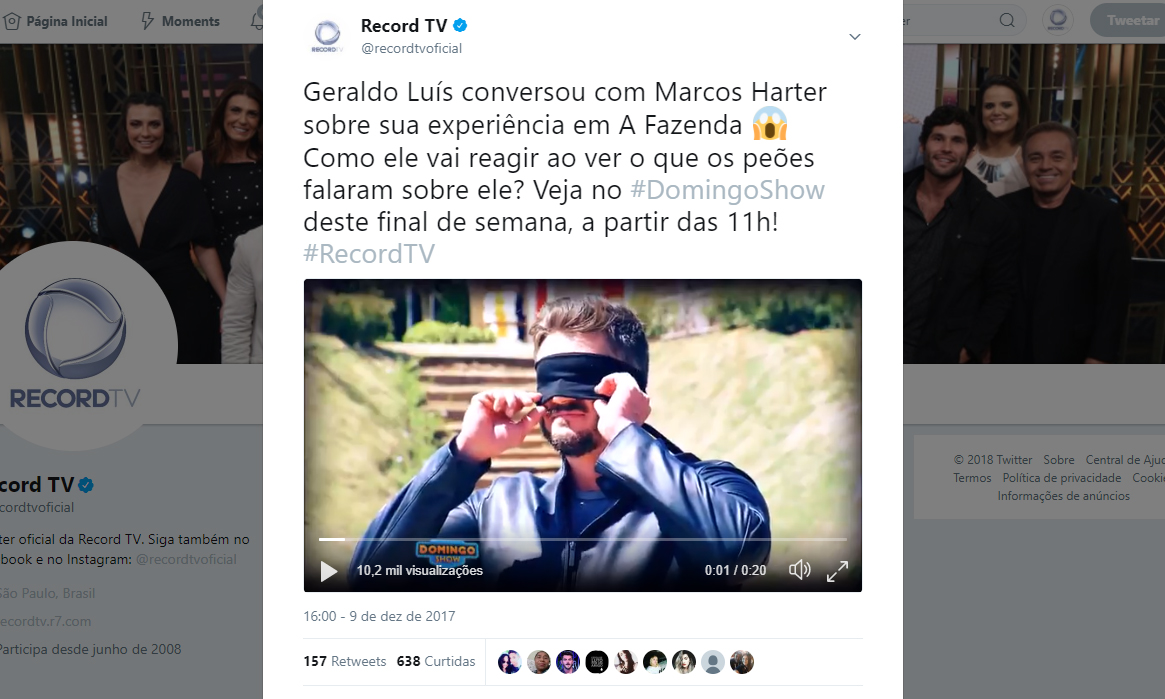