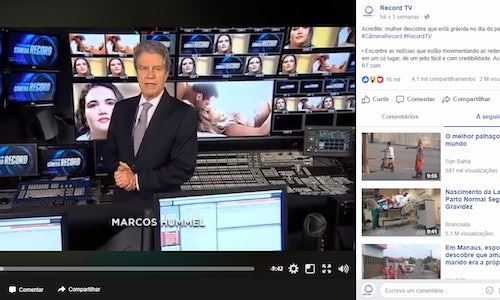 As one of the major Brazilian TV broadcasters, we're naturally one of the biggest video producers in the country as well. Therefore, we were already publishing a ton of videos on the platform.

But one of the coolest features Facebook has broght us in 2017 was the ad break – and since we are partners here in Brazil, we were picked as one of the beta users. All of our 35+ FB pages were allowed to use the feature beforehand.

Then our objective became this: to become one of the leading companies in the platform, in our country, when it comes to video. And, at the same time, make money with it - and create a kind of benchmark for this new ad feature.

First of all, we had to find out a way of making our 35+ pages operative, profitable and going on a full throttle. The starting plan was this: we were going to build a team just for that. We split up our social media team in two, and a segment of around 10 professionals were detached just to select content that we broadcasted on TV, edit it for Facebook and publish in real time – as fast as they could. And, at the same time, using their knowledge of what goes well on which accounts, using strategy.

The team started to operate almost on a 24/7 basis. All of our shows got their videos published, with ad breaks when possible, as a default.

Our strategy considered that, even with the possible hate that an ad could generate, the ads wouldn't be longer than 15 seconds (it's either 5, 10 or 15 seconds). And knowing the Facebook algorithm as well as we do, we knew that the engagement and reach we would get for publishing so many videos would surpass the amount of hate, unfollows and such, by far. We knew how to operate feed and climb it - since we built all of our pages from scratch and without any money injection whatsoever, and they already sum up to 70 MM non-unique followers among themselves. Just on an organic basis.

The plan was also outlined to make those videos coexist with our FB Lives, posts, stories, GIFs, branded content and such. And they have been work side by side with harmony so far, bringing balance to the feed and pleasing more our followers than generating dislike.

The strategy worked just fine: we created a work scheme that boosted our page numbers, reverted in money and was an overall success. The revenue from the ads increased month after month in 2017, never backing down. And we hope we have created a benchmark for the ad breaks feature.

We currently own 38 Facebook pages (some are seasonal), the biggest amongst them being @PortalR7, with more than 13 million followers (and a total of 70.2 MM followers, non-unique). But our numbers are great when we sum their performance together. On those 38 pages, we had, from June 12th to November 27th, 24.9 MM hours of total video time spent. And 1.7 billion video views.

For example, we'll take 4 of them: RecordTV, A Fazenda, Balanço Geral and Cidade Alerta. Our TV station, a reality show and two news programs: when it comes to watched time, RecordTV jumped from 3 to 5 MM minutes a week on Facebook to a peak of 46 MM (multiplied ninefold, at least), two months after the strategy was put to work. Cidade Alerta: from an average of half a million to 2 MM, more or less, to a peak of 19 MM in November. A Fazenda: from nothing, because the show runs by season, to peaks of 31, 32 MM. Balanço Geral: from half a million to amazing 12 MM minutes watched per week.

So, basically, we grew exponentially while making money. 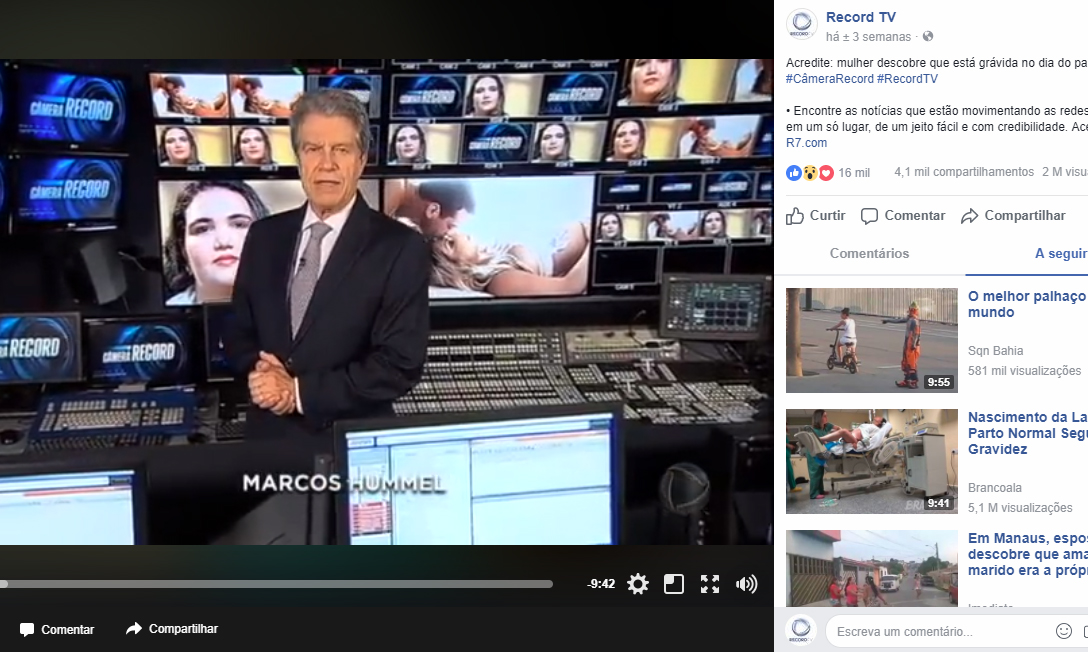