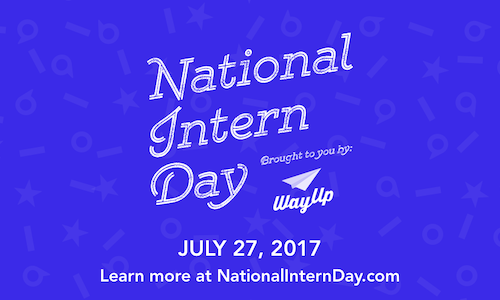 WayUp, the leading career platform for U.S. college students and recent graduates, matches more than 4 million candidates with jobs and internships at thousands of top companies nationwide. To generate brand awareness and recognize the vital contributions that interns deliver to their respective organizations, WayUp decided to create a dedicated day called National Intern Day on the fourth Thursday of July. The overwhelming response, by interns and organizations alike, empowered this new holiday to become the most engaged with topic globally on Twitter on July 27th, 2017.

The objective of National Intern Day was to dispel the stereotype that internships are exclusively about fetching coffee and making copies and create a meaningful moment of expression for the importance of interns and the programs they represent in turn. In a world with so much negativity, National Intern Day ultimately became a real breath of fresh air in the news cycle that day.

By creating National Intern Day, WayUp inspired thousands of employers across multiple industries - tech, retail, consumer goods, non-profit, finance, and more - to give their interns the recognition and respect that they deserve. National Intern Day allowed WayUp to connect with and grow its community of students, recent graduates, and employers but also helped to establish WayUp as a national expert on interns, and the go-to resource for anything and everything internship-related.

Beyond all expectations, the WayUp team was able to generate global awareness and engagement by orchestrating a multi-platform campaign with minimal resources and paid reach to two distinct audiences (interns and companies). Some of the main campaign activations included a contest called the Intern Awards to find the country's best interns and intern programs, multiple video series about current and former interns, an expansive earned media push, dozens of blog articles of advice for employers and interns, and "intern celebration kits" filled with custom swag and banners that were shipped to offices across the nation.

More information on each element is below:

#NationalInternDay became the #1 trending topic in the world on Twitter, and the keyword "national intern day" was used 31,034 times and reached over 261,863,266 people.

Thousands of companies and organizations across the nation celebrated through in-office pizza parties, ice-cream sundae bars, sporting events, CEO AMAs, scavenger hunts, and more. Google, the ACLU, the Chicago Cubs, PwC, Microsoft, NASA, MTV, NASCAR, Pixar, HP, Pokemon, and more were some of the first to get involved, triggering others to celebrate throughout the day. Satya Nadella and John Legere took to social media to get involved. Dozens of members of Congress on both sides of the aisle (including Nancy Pelosi!) also participated in the celebrations. Three of the most prominent broadcast morning shows, The Today Show, Good Morning America, and CBS This Morning, gave their interns shout outs on air. Even celebrity interns, like Super Bowl Champion and Green Bay Packers' Safety Ha Ha Clinton-Dix, posted on social media to celebrate.

National Intern Day also drove incredible brand awareness back to WayUp; the buzz around it created real, genuine interest from over 1,100 businesses interested in hiring through WayUp's platform. In addition to driving interest from companies, all of the excitement around National Intern Day also inspired thousands of students and recent grads to learn more about WayUp too. On July 27th, WayUp's social media channels were flooded with new visitors and experienced their average number of monthly profile visits in one single day.