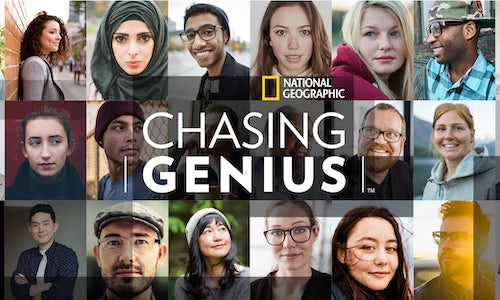 Consumer engagement has long been a cornerstone of National Geographic's business model and purpose. For more than a century, the company's poignant, dynamic storytelling has inspired people to act, enlighten their perspective, provoke conversation and become catalysts for innovation.

National Geographic developed Chasing Genius based on the belief that transformational ideas can come from anywhere and anyone. The ground-breaking digital platform launched as part of an integrated partnership with GSK Consumer Healthcare, was designed to inspire, ignite and enable the genius inside each of us to turn ideas into catalysts for positive global change.

Designed to crowdsource "sparks of genius" from everyday people, Chasing Genius encouraged audiences everywhere to submit one-minute videos describing their ideas for a chance to win $25,000 to take their visions further. The first installment of the challenge aimed to address some of today's most critical issues, including:

1. Sustainable Planet: How can we reduce our impact on the planet?

2. Global Health: How can we help people live healthier lives?

3. Feeding 9 Billion: How do we feed a planet approaching 9 billion people?

The submissions were later evaluated based on innovation, creativity, viability and inspiration by a "Chasing Genius Council. Members of the Chasing Genius Council helped to choose three winners, one in each category, and the community chose the People's Choice winner.

Through Chasing Genius, the organization aimed to add to the unrivaled, philanthropic giveback of 27% of proceeds to the non-profit National Geographic Society, by turning big ideas into even bigger social impact -- building consumer loyalty along the way. Here's how National Geographic did it:

National Geographic designed a secure, dynamic, purpose-based platform and digital headquarters to host their community of conscious consumers, providing multiple ways to contribute — submitting their own original ideas, offering feedback to others, and sharing with their networks.

Inspired Them with World Class Storytelling

National Geographic created inspirational content that was shared socially and across other platforms to demonstrate the power one idea can have in changing the world. This included three mini-documentaries and a steady drumbeat of more than 20+ pieces of digital content, including quizzes, articles, galleries, and interviews, all of which were shared through 277 posts across National Geographic's global social reach.

Enlisted the Support of Experts

National Geographic developed a rich suite of social media tiles that engaged our global community with probing questions and statistics that helped to contextualize the three critical issues we aimed to address. Across the digital site, National Geographic embedded social sharing buttons that encouraged visitors to share the challenge and ideas that inspired them. In addition to the organization's organic reach on social, National Geographic implemented a paid social campaign to target likely participants such as socially conscious and entrepreneurial audiences, as well as those interested in science.

Activated Our Partners and Social "Superfriends"

In addition to innovating alongside program sponsor, GSK Consumer Healthcare, National Geographic supplied social media assets and copy to other strategic partners such as Nerd Nite as well as more than 1,000+ universities, innovation incubators, and sustainability organizations, extending the organization's reach well beyond their unparalleled social footprint, generating an additional 8,700 posts with a potential extended reach of 50 million followers.

In both metrics and in mission, National Geographic's Chasing Genius was a clear success, generating a rare and coveted level of consumer engagement by tapping into collective passions, and rousing the world to work for positive change.