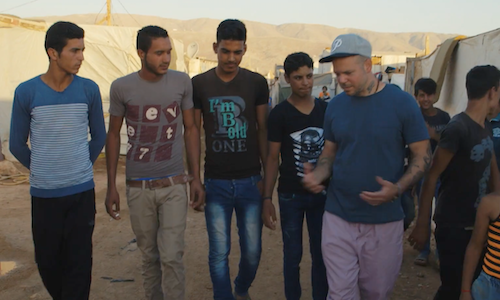 During the filming of his "Guerra" music video, Residente decided to go to the border between Syria and Lebanon to film what life is like for those refugee camps.

The documentary tells the story of more than 600 refugees who have been driven from their homes and trapped in a vicious cycle of contract servitude for almost a decade.

The film-maker exposes the contrasts between the difficulties endured by the refugees and the luxuries of the surrounding communities, interviewing a diverse group of Syrians, visiting their makeshift homes, participating in their cultural celebrations and joining them at work, where girls up to 16 years work up to 10-hour shifts.

The short film, published on the artist's YouTube account and disseminated on social networks, is part of the Guerra project that aims to promote peace and raise awareness about the victims of conflicts around the world. The project was launched two months ago with a music video, directed by Residente, for his homonymous song "Guerra", which was nominated for two Latin Grammys.

The documentary culminates with the return of Residente to New York, where he works with the acclaimed visual artist and French photographer JR, to create a street art installation aimed at examining the experience of refugees.

Residente (born René Pérez Joglar; February 23, 1978) is a Puerto Rican rapper, writer, producer and founder of the alternative rap group Calle 13. He has won 24 Latin Grammy awards, the most Grammys ever awarded to a Latin artist.

He studied fine art for 8 years, before launching an independent career as a lyricist, performer and director of many his own music videos. His lyrics have been lauded by critics and studied by academics at universities around the world.

Despite his success, Residente has never shied away from speaking his mind. In 2009, his work was notably censored for 3 years after he called the governor of Puerto Rico a "SOB" for laying off more than 30,000 public employees.