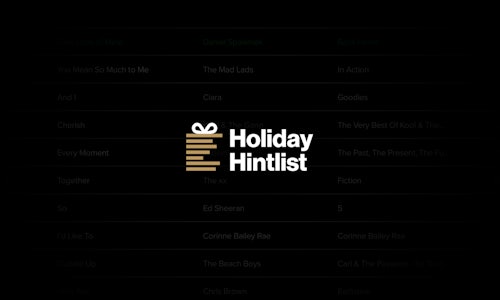 The holiday season is notoriously hard to break through, with every brand vying for consumers' attention. Our goal was to make Verizon top-of-mind as a shopping destination during the holidays while promoting the wide range of tech products offered.

In addition, we wanted to tap into a cultural trend or truth, an activity we could leverage around the holidays that would make our work more relevant and engaging.

So this year we took a different approach: instead of telling people why they should shop at Verizon, we helped them ask others for what they really wanted.

In order to make the biggest impact possible, we started by looking at the biggest pain points surrounding holiday gifting. We found that most consumers know what they want, but often feel uncomfortable asking family and friends for specific items.

We also discovered that sharing music was a popular activity, particularly holiday playlists. The sharing of such playlists offer people a very personal way to express themselves to others without being overly aggressive.

So, we merged these thoughts to develop the Holiday Hintlist – Spotify playlists that featured real songs by real artists, that when read from beginning to end, spelled out hidden gift requests. Custom-curated playlists were created for all of Verizon's hottest tech gifts, and users could generate and share them with family and friends, politely suggesting holiday gift ideas.

Creating a Hintlist was simple. Users picked the gift they really wanted. Then, by using Spotify's API, a unique playlist was dynamically generated for that product, which was shared with the desired recipients.

The Holiday Hintlist made Verizon a hit this holiday season. The campaign garnered 6.8 million impressions with an 83% completion rate, Verizon's highest ever when compared to similar activations. This resulted in people talking favorabily about the brand during the busiest shopping period of the year, with a 95% positive / neutral social sentiment, 7% higher than averge. The campaign created headlines as the Holiday hintlist was named "Fun and surprisingly specific" by Entertainment Rocks as well as "a really clever way to make a subtle suggestion" by Digital Trends. 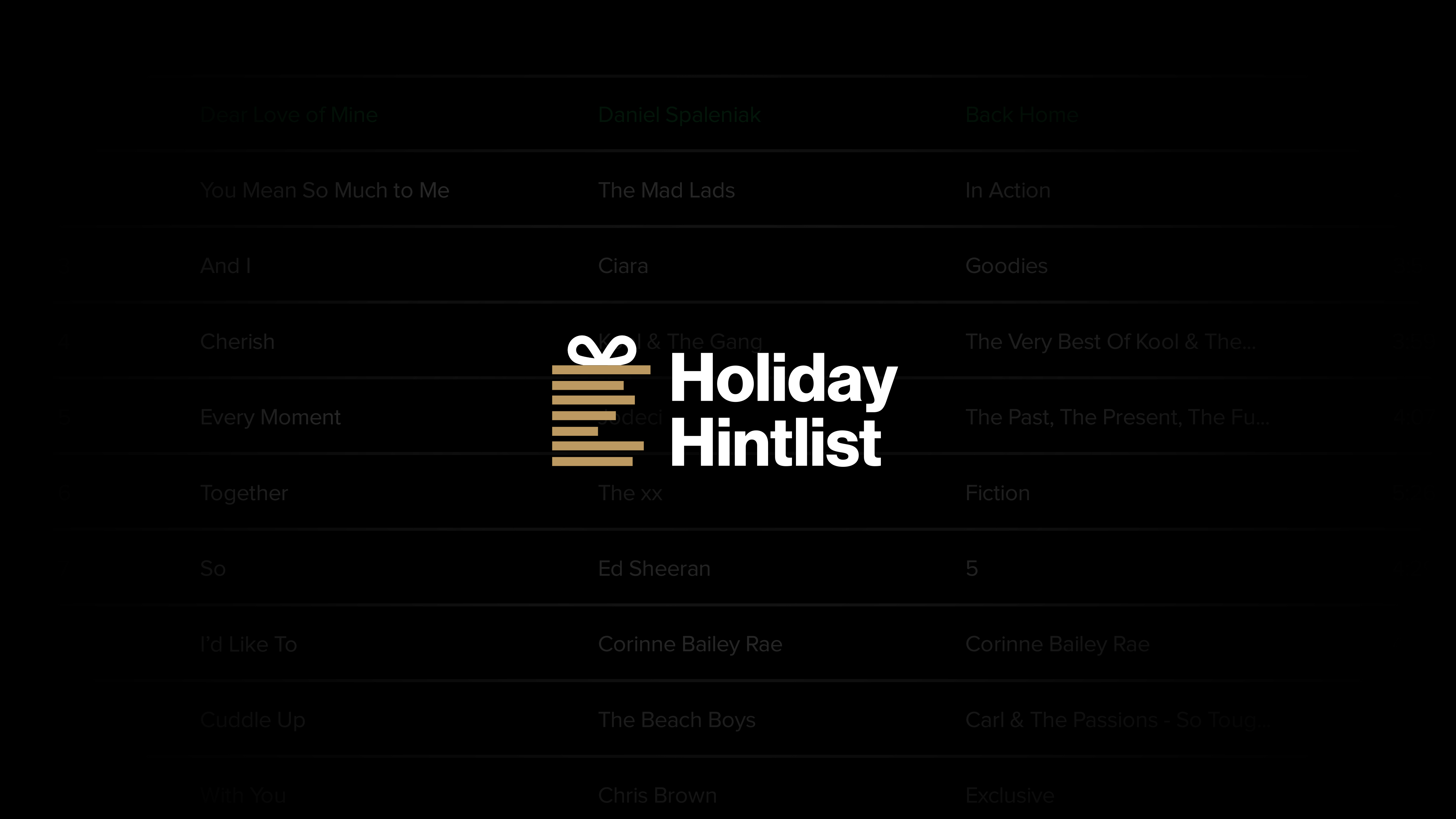 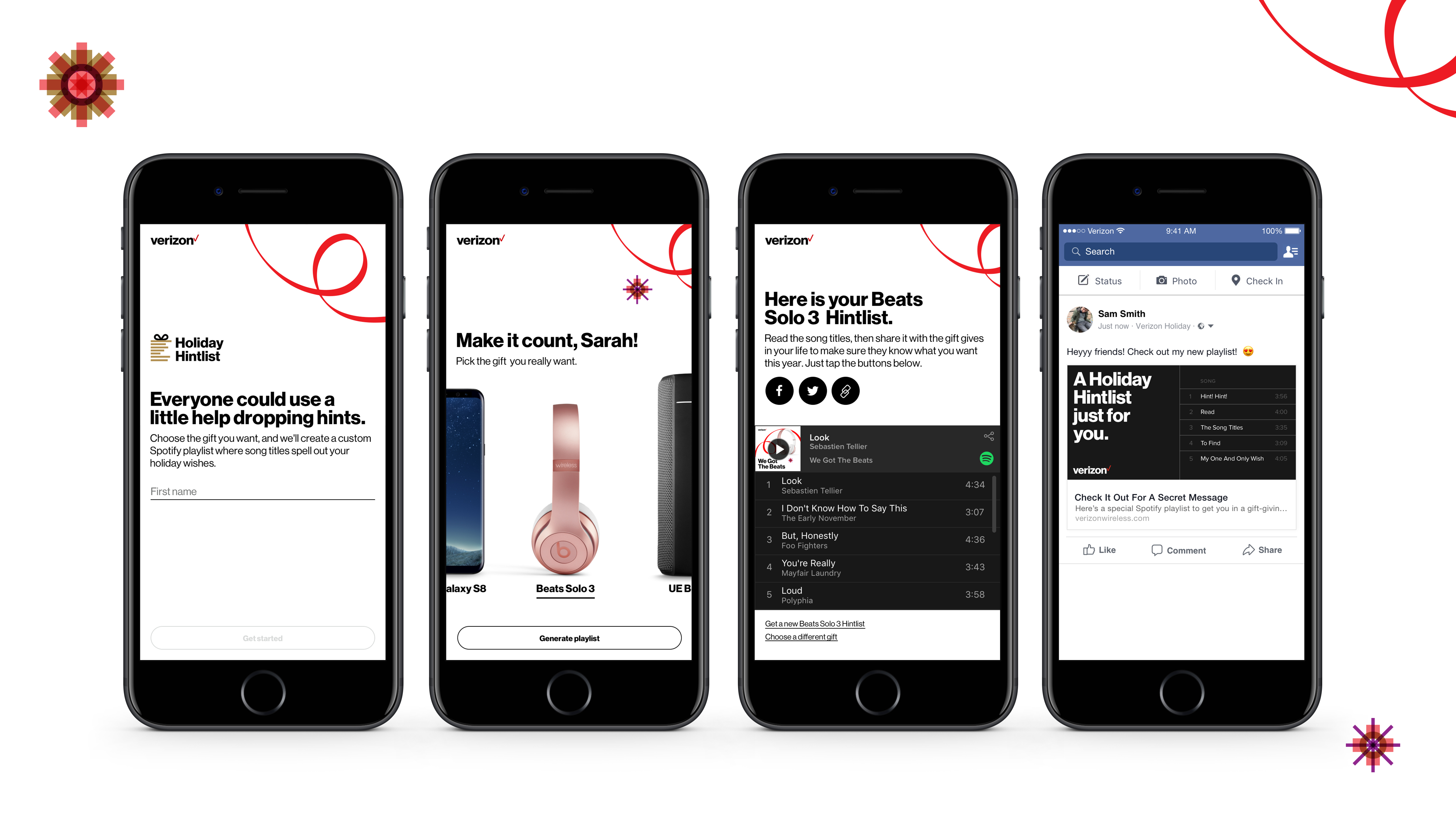 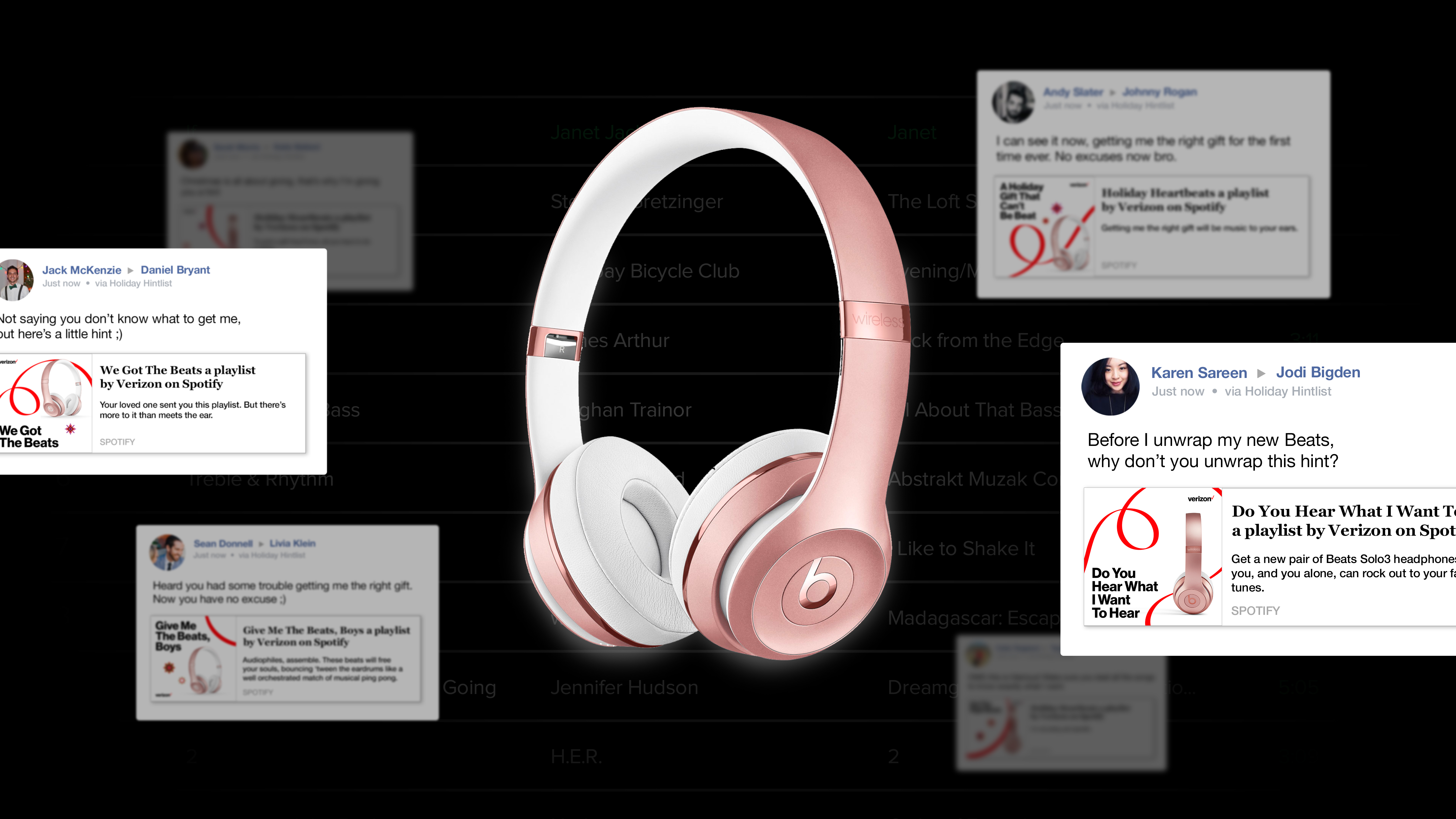 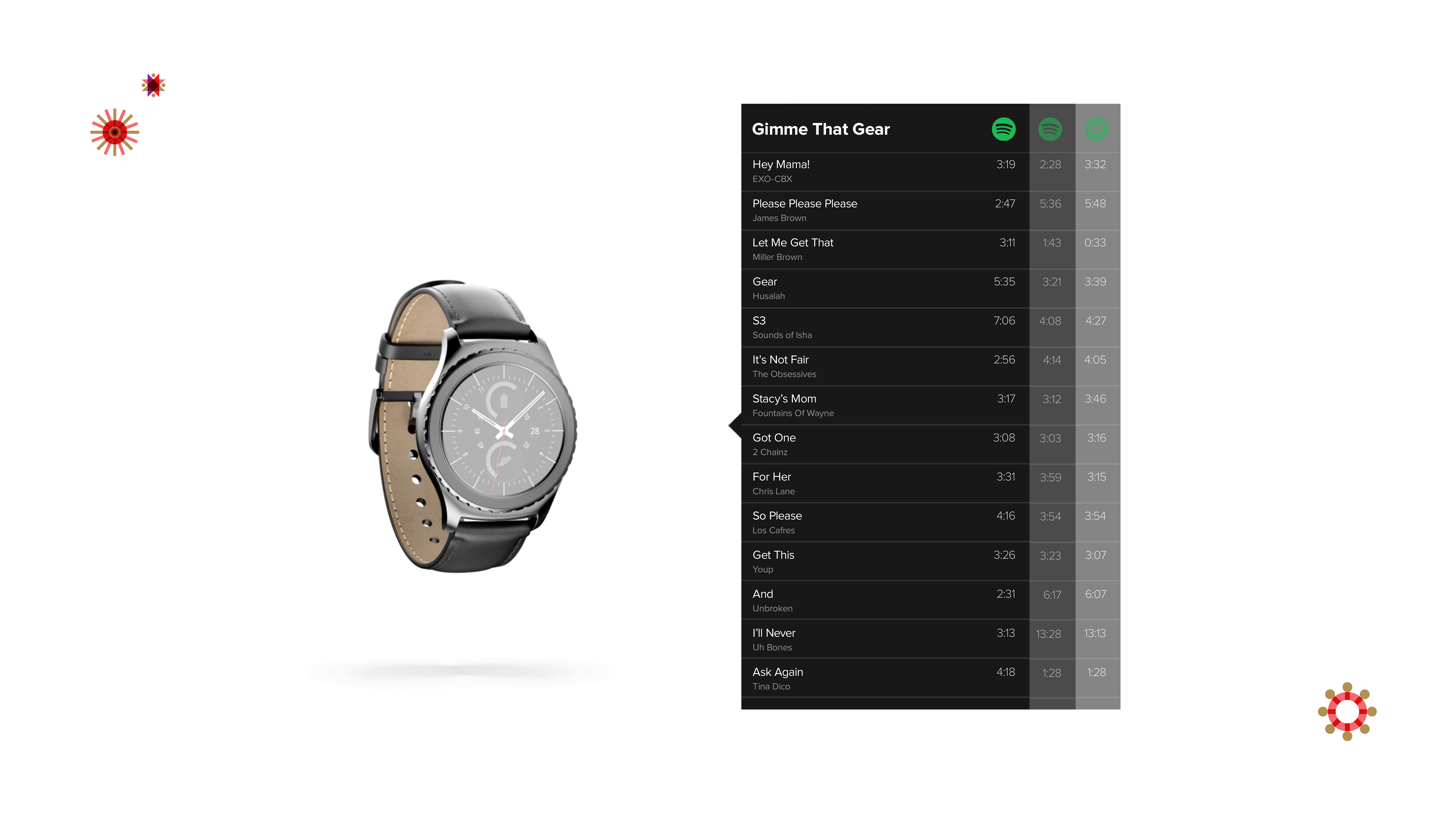 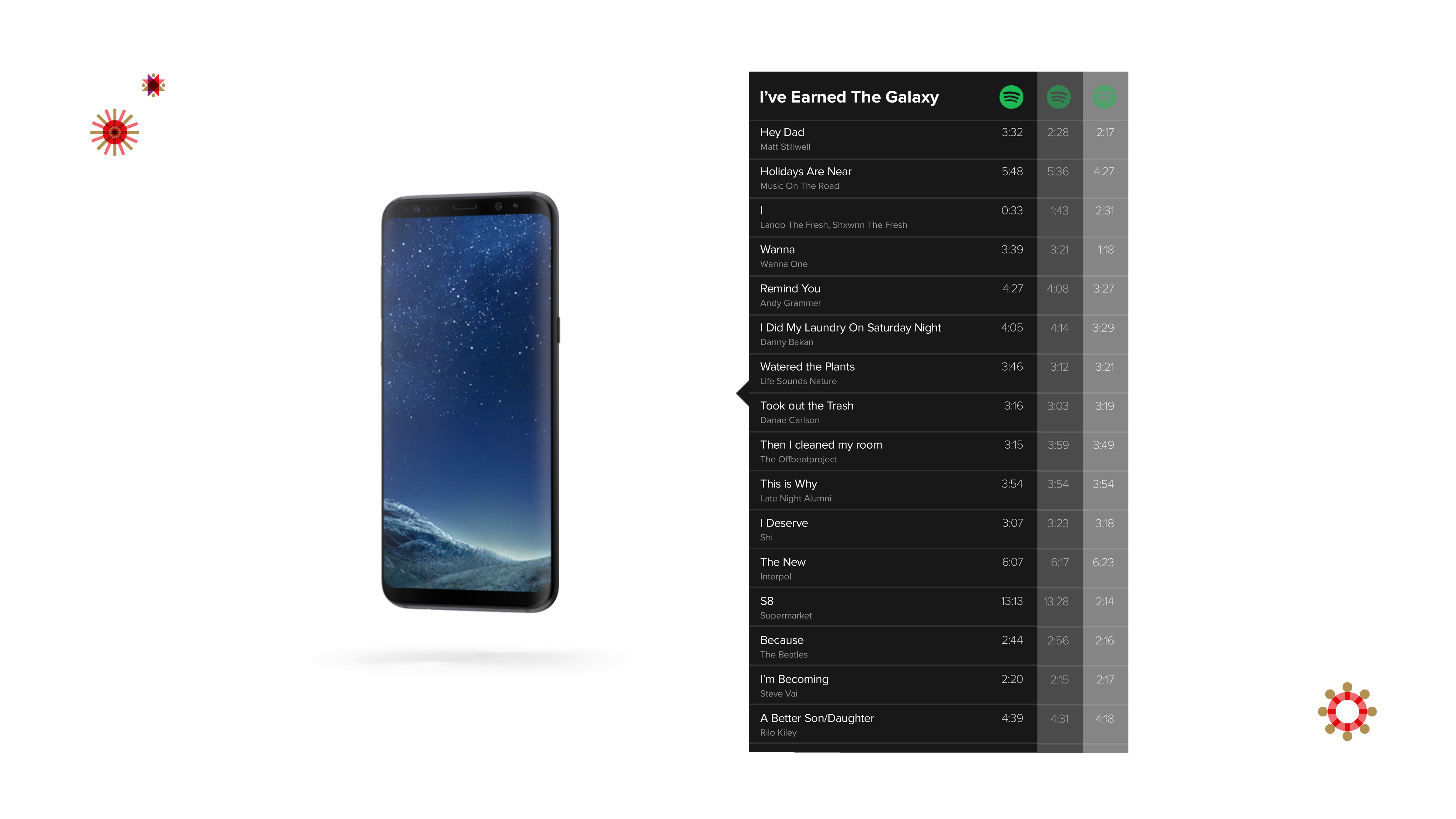