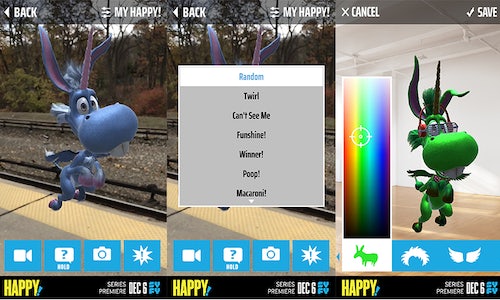 HAPPY! is a big swing for SYFY and represents our first foray into the premium scripted mixed animation space. The show also has big names attached to it, in the form of show leads Christopher Meloni and Patton Oswalt. The show is also a unique combination of "bah humbug" holiday resentment and sentimental holiday cheer. It's violent, it's crass, it's irreverent, but it's also, in a weird way, very sweet. The SYFY digital team set out to leverage this unprecedented combination of talent, animation, and sentiment in a way that capitalized new and emerging technologies.

In a case of fortuitous timing, iOS launched ARKit for developers at the exact time we were formulating our digital strategy. This new framework allows creators to create augmented reality experiences for iPhone and iPad, by blending digital objects and information with the environment. The narrative parallels between ARKit (augmented reality) and HAPPY! (an imaginary friend) created a perfect storm for our team. We set out to marry this new technology with our new content.

HAPPY! AR is an augmented reality app that leverages the full capabilities of ARKit, and gives users a chance to interact with the eponymous star of HAPPY! from the comfort of their own living rooms.

People who download the app and scan their environments will see Happy pop into their surroundings, flying and flitting around. We worked closely with AXIS animation, the studio that animated the television series, to animate Happy, and recorded original lines with Patton Oswalt, who voices Happy. The end result is that Happy looks and sounds just like he does in the show.

Players also have numerous ways that they can interact with Happy, and make him their own! Tapping Happy will prompt him to react to the touch with an original animation. He might say "He He, stop that tickles!" "Nothing like a nice tummy scratch", or he might just poop a Christmas ornament! Players can also select a specific action so that they get the reaction they want. Happy also has an "Ask a Question" functionality, where players can ask Happy a yes/no question and he will respond with his own upbeat answer (think of it like a relentlessly cheerful magic 8-ball). The ability to record videos and snap picture of Happy within the app is unbelievably intuitive, making sharing out to social networks a snap.

One of the biggest plot points towards the end of the first Season of HAPPY!, is a war between imaginary friends. Everyone has an imaginary friend, most of us have just forgotten about ours. From a narrative perspective, it was important for us to capture this plot development in our execution of app. We created an imaginary friend customizer in the app that let's users transform Happy's appearance. Happy's fur, horn, hoofs, and belly color are all completely adjustable. Users can also give Happy fun and quirky accessories like an assortment of sunglasses and hats. This customization transforms the way Happy looks everywhere in the app, so that when users go to share socially, they can show the world their new imaginary friend.

During the first 2 months since launch, HAPPY! AR has garnered over 35,000 downloads, and has a remarkable over 2 million interactions within the app. Users have made Happy poop acorns, apples and Christmas ornaments over 300K times! HAPPY! was also renewed for Season 2 since the launch date, which is ultimately our goal as a promotion for the on-air series.