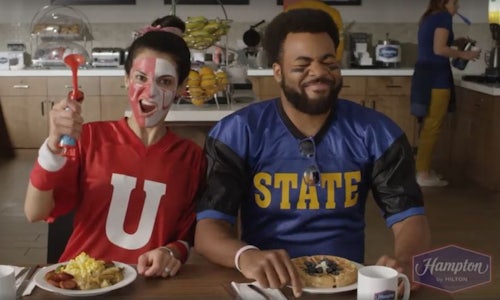 Travel isn't always glamorous, yet many brands feed consumers aspirational visions of lounging on the beach, hoping to turn these idealistic experiences into bookings. The truth? 71% of people prefer ads that reflect their actual lifestyle. With this in mind, Hampton by Hilton kick-started a new narrative around the "real" reasons people travel—or what they called "obli-cations" (i.e., obligatory vacations). Through research, the brand found that the top three obli-cations were: visiting family, kids extracurriculars (e.g. away games/college visits) and business travel.

Objective 1: Secure a 5% increase in consideration among corporate travelers and 3% among leisure travelers by end of year (beginning from campaign launch). As well as 3% overall band revenue increase as compared to same period 2016.

1. Create program around new narrative that would differentiate Hampton from the pack, i.e., the anti-aspirational travel brand; the home of real travelers

4. Use top performing platforms and tools to reach audiences with the message (i.e., video and live social media)

The partnership kicked off with a live event on the #1 platform used by travelers: Facebook. In just a week, the event had generated 3.5MM impressions and beat the brand's video views record by 110%. Additionally, the brand amplified SC's video content through influencers who also shared their own real travel experiences, along with traditional and controlled media reaching 422MM travelers and securing a YOY increase in revenue of 8%.

Second City Partnership: With a topic like obligated travel, it was crucial to identify a partner that could ignite the #RealTravel dialogue in a positive way. SC brought wide content capabilities and name recognition (having produced the most Saturday Night Live cast members). For maximum impact, we focused on video as a main tool due to its ability to be repurposed across platforms, its longer shelf life and the fact that people spend 3x more watching a live video on FB. We leveraged video in two ways:

1. Facebook Live: Headlined by SC improv masters, the online event kicked off the campaign, introducing consumers to the Real Travel and "obli-cation" concept and engaging followers with incentives.

Real Travel Influencer Team: To amplify the Second City videos and #RealTravel conversation, Hampton enlisted nine influencers to share their real travel experiences via social media. The brand identified a mix of influencers who traveled for different "obli-cations" and fit across the brand's diverse demographics. The influencers collectively generated 315 pieces of original content and more than 7.6MM impressions.

The Real Travel Narrative: Controlled media tools were used to increase visibility for the real travel message, starting with a USA Today partnership. The brand leveraged the publication's broad audience and reputable travel news content with a series of promoted articles that also embedded the SC videos, banners and links. The native content campaign reached 4.2MM impressions and drove more than 102K pageviews with nearly 1,700 link clicks showing that readers found the content compelling (of these, 400 clicks went to Hampton.com).

Objective 1: Secure a 5% increase in consideration among corporate travelers and 3% among leisure travelers by end of year (beginning from campaign launch). As well as 3% overall band revenue increase as compared to same period 2016. 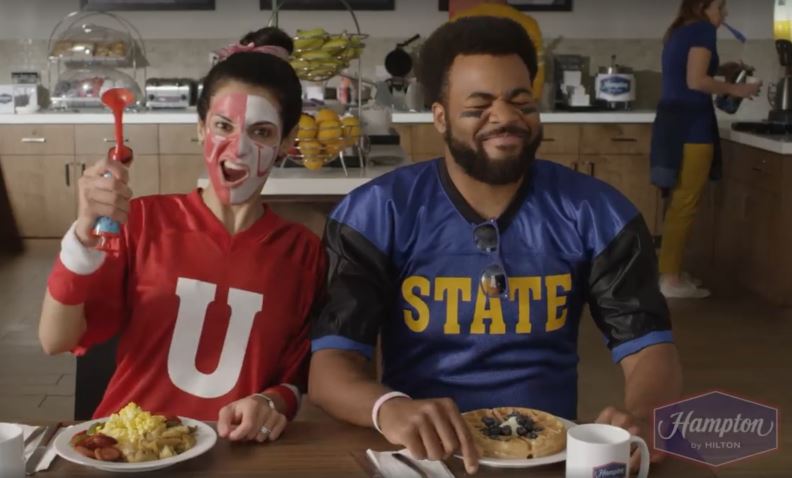