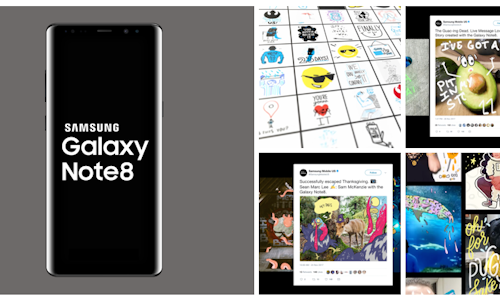 We set out to launch the Galaxy Note8 in a bigger, better way. We wanted to push past productivity messaging and position the phone as a true tool of self expression.

We decided to stop typing and start drawing. First, during the reveal, we responded to over 1,000 consumer comments with S Pen-illustrated responses, then released a completely hand-drawn phone guide. To further prove the Note8's creative power, we blended photography and illustrations on Samsung channels, then asked Instagram's biggest digital artists to do the same with fan photo remixes. Series after series of Note8 illustrations sold consumers on the creative power of the phone and its S Pen superior quality, driving them to checkout.

In total, the campaign generated over 44.8 million impressions, and launched over 1,000 pieces of illustrated content through posts, Instagram Stories, and 1:1 consumer engagements.