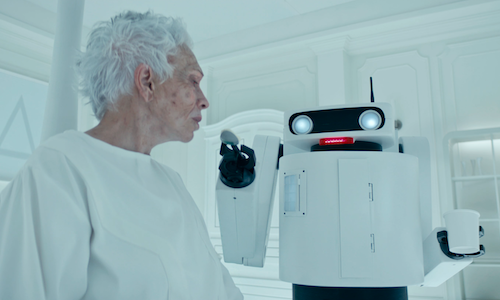 Lord Danger was asked by Halo Top Creamery to "make something weird for the internet " the goal was to find an offbeat and interesting way to garner interest and awareness of the brand outside of its current customer base. Lord Danger wanted to produce memorable creative that would stand out in the noisy digital landscape. Ultimately, we wanted to create an anti-commercial.

Lord Danger consulted with the brand to create the release strategy which included digital distribution through Mike Divas Youtube Channel, theatrical release and earned media. It was released on Mike's Youtube page to take advantage of his inherent audience and theatrically released ahead of a horror film to play against the movie trailer world. This commercial is unique because the spot incorporated dark humor and no product to create a cinematic universe that viewers wouldn't believe was an ice cream commercial - and it worked.

The results were a massive success. The video went viral and combined, it gained well over a million views on Youtube, Facebook and Vimeo. It obtained theatrical release before the horror film It and ran domestically for two months. On Facebook, it received 200K+ shares, 3K+ likes and hundreds of comments from fans. "Eat the Ice Cream" won Bronze in the Epica Awards for Humor in Advertising and was named Top 10 Best Ads of 2017 by Adweek. "Eat The Ice Cream" garnered earned a substantial amount of earned media with write ups in Adweek, Ad Age, and Indiewire to name a few. Vice called it a "Dystopian Nightmare" IndieWire called it "Black Mirror-Esque" so, considering the goal was to create a dark ice cream commercial, we would like to think that goal was achieved.

Video for Eat The Ice Cream