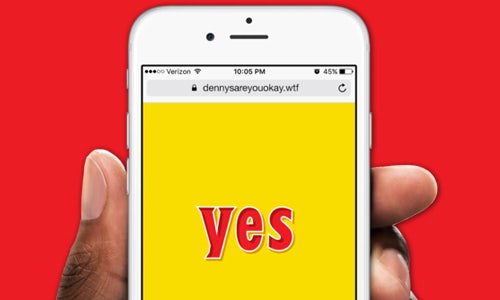 Denny’s, WTF Are You OK?

When it comes to Tumblr and Twitter, the goal for Denny's is simple: Don't be a typical branded Tumblr account.

As "America's Diner", Denny's is a brand that has worked hard to reflect the growing diversity of its customers and is constantly adapting the way in which the brand connects with them. To be successful, Denny's understands that it has to engage with customers on their terms and in their terms. This means utilizing the uniqueness of a platform like Tumblr and Twitter to connect with fans in a way that is authentic, and relevant to the Tumblr and Twitter community.

So rather than push products or messaging on Tumblr and Twitter, the objective for the content is to serve as a tool to help make the brand be a part of the community, not an intrusion; to connect with fans in an organic way. Or simply put, just have fun.

With a playful mix of references to pop culture, internet memes and breaking news, Denny's content is always fun and almost always slightly off-center, especially on Tumblr and Twitter. So much so that if you look through the replies to any Denny's post Tumblr and Twitter, which includes a interesting, mix of food-related images and animated GIFs that might even be borderline weird, you will almost always see number of fans asking, "Are you OK?" and "WTF". Given how much they are asked, Denny's created a creative way to respond, directing people to the hilariously simple https://dennysareyouok.wtf/. Selective in how often they choose to reply with the link, Denny's identifies the perfect opportunities to engage with fans on Tumblr and Twitter through the site, which has generated over 236,000 views since launching in June of 2017.

Incredibly selective in how often the brand chooses to reply to fans with the link, Denny's identifies the perfect opportunities to engage with fans on Tumblr and Twitter through the site, which has generated over 236,000 views since launching in June of 2017. 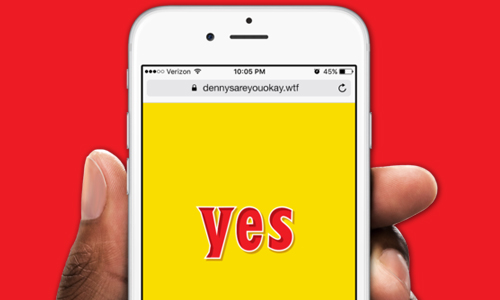