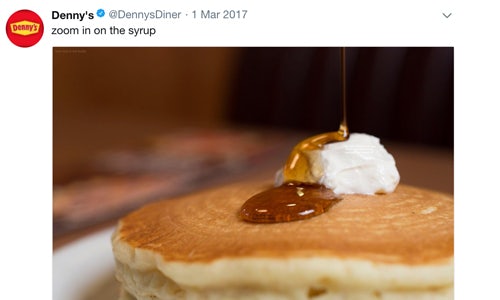 Denny's is "America's Diner" and the brand is one that reflects the growing diversity of today's America, a place where people from all walks of life come together with family, friends and complete strangers. To be successful in connection with this diverse customer base, Denny's knows it has to communicate with customers on their terms, and in a way that is relevant to each platform. More importantly, Denny's knows that to have any success connecting with customers on Twitter, it has to provide content appropriate for the platform and embrace the community in order to build emotional relevance and celebrate creative self expression.

So the goal for Denny's on Twitter has been simple: Don't be a brand Twitter account. Instead, leverage breaking news, pop culture and trending memes to find a way to separate Denny's from the noise of corporate social media flooding the streams of our fans and allow Denny's to be a part of the community, not a intrusion.

The strategy for Denny's Twitter is to extend the conversations that happen in the diner booths all across America by responding through relevance and community--and doing so as those online conversations are actually happening . Denny's has built a loyal fan base by treating them as equals, not operating our account as some faceless corporate entity, but as another user who cares about the same things they do—whether it be breaking news, a big game, or the latest meme to hit Twitter. Denny's key attribute is that it feels like a friend online, one who is tagging you in the latest meme. We just happen to be using the Denny's moniker and mentioning our other true love: diner food. But, you know, in a fun way.

For example, in early 2017, a meme had emerged on Twitter where you could zoom in on an image of a dog to read a hidden message on its nose. Once the meme had hit just the right amount of popularity, Denny's felt it was the opportune time to offer up its own response to the meme. Having a little fun, the diner wanted to capitalize on everyone's collective feelings about the start of 2017. The political state of our nation had us more divided than ever. The Falcons blew a 25 point lead to lose the Super Bowl. La La Land won Best Picture... and then lost Best Picture. There had been a lot of things piling up and America was questioning its current reality. So, by tweeting a stack of Denny's fluffy pancakes with the instructions 'zoom in on the syrup' we invited our followers to take a journey. A journey that would give them temporary solace from their 'existential dread'.

The tweet struck a chord with our fans. They expressed their need for pancakes and their love for Denny's social media, an intimacy transcending the brand-audience paradigm. Amassing over 121,000 retweets and 170,000 likes, social conversation about Denny's skyrocketed 534%. And within nearly 24 hours it became one of the most successful brand tweet. OF. ALL. TIME!

One of the most engaging brand tweets of all time, completely organic. 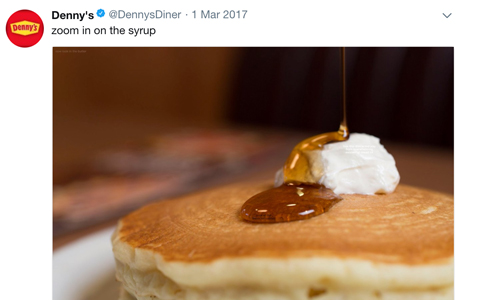