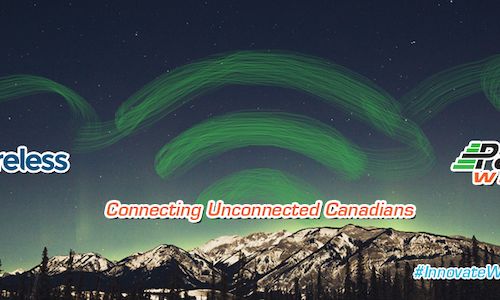 The objective for both organic and paid Twitter campaigns was to spread awareness about our deployment with Ice Wireless in Northern Canada. The paid campaign was launched on August 8 with a budget of $150, targeting end-users in Canada from the age of 18+. The goal of our organic campaign was to spread awarenessof our latest customer announcement to our targeted audience. We were able to spread awareness of our partnership with Ice Wireless by highlighting both end-user and service provider benefits. End-users in Canada were thrilled to know our partnership enabled mobile network operator Ice Wireless to offer unlimited data plans, the first of its kind in ALL of Canada.

We wanted to use all the unique benefits Twitter has to offer. For example, we created targeted hashtags for our campaign (#InnovateWithAPurpose, #ConnectTheUnconnected). We generated over 106K organic impressions and over 350 link clicks. The hashtags used enabled our followers to browse through current Tweets while encouraging other followers to participate when citing our announcement. Another key component to our organic campaign dealt with our messaging. We changed our technical messaging to have a personable approach. Our messaging resonated with the audience and highlighted many of the challenges end-users in Northern Canada face every day. The messaging motivated our audience to engage with us and in result our engagement totaled to 1,114.

For our paid campaign we targeted end-users throughout Canada. We spent a total of $150 for this paid campaign and in result the cost per link click was $1.14 with a total of 132 link clicks and engagement totaled to 104. The promoted impressions totaled to 37,292 while our organic impressions on the same Tweet totaled to 3,588. The total impressions our Tweets received reached a staggering 40,880. The powerful messaging and creative tactics we used increased Parallel Wireless awareness in the highly competitive telecommunication market.

Our organic Twitter campaign generated over 106K impressions while our paid campaign generated 37,292K impressions. Our paid campaign along with our organic campaigns was formed around these three aspects; audience, purpose, and creative messaging. Our messaging touched on the pain points end-users in Northern Canada experience daily, like poor service, no streaming, and no internet access. Using this technique our audience was able to relate with our Tweets, and in result increased engagement.

A key component to our Twitter campaign was ensuring our Tweets went out at peak hours. Using the appropriate time helped us average 5.9K impressions. As for the creativity of our Twitter campaign, we wanted to use Twitter's most known component and that's the use of hashtags. We created #InnovateWithAPurpose and #ConnectTheUnconnected because of the meaning behind our deployment. End-users in Northern Canada were living without mobile coverage, which in result means they are unable to communicate with loved ones, study from home, access mobile health and more. Our campaign's purpose was to bring awareness to our partnership but most importantly the positive impact our collaboration will bring to the thousands of unconnected end-users in Canada.

Video for Connecting the Unconnected Canadians