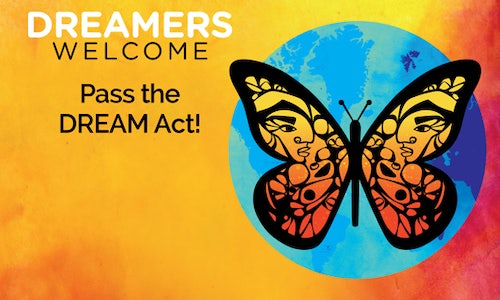 Dreamers are young aspiring Americans who live, study and work in our communities. Brought to the United States as children, they are allowed to stay here under the Deferred Action for Childhood Arrivals (DACA program). There are more than 9,000 DACAmented educators currently teaching the next generation of leaders in our public schools, and hundreds of thousands of students with DACA status. To protect these vulnerable educators, the National Education Association launched an online and offline campaign to urge Congress to pass a clean Dream Act, which would grant legal status to Dreamers.

Our strategy was to activate educators and supporters to express their support and advocate for the Dream Act. The campaign inspired our audience by lifting the personal and riveting stories of DACAmented educators and students affected by the Trump decision to rescind DACA, while also shining a spotlight on what is at stake for DACAmented students, their families, and educators if DACA ends. The key ask of this campaign was to submit an online postcard with a message to Congress with "one reason why you support Dreamers."

The goals of the campaign were threefold:

1. Position NEA as a leader in the space that intersects immigration and education and as a champion for DACAmented students, educators, and the Dream Act

2. Encourage NEA members and supporters to pressure lawmakers to pass the Dream Act

3. Receive 20,000 unique digital postcards, one for each DACAmented educator impacted by the end of DACA.

NEA commissioned artwork from Favianna Rodriguez, an art educator based in Oakland, California, to create a piece to support Dreamers. The butterfly symbol, which is now synonymous with Dreamers, was inspired by immigrant rights groups. To Favianna, the monarch butterfly represents the dignity and resilience of migrants and the right that all living beings have to move freely.

Using this artwork, NEA developed four butterfly-themed digital postcards and created a landing page where users were able to select a postcard graphic and add their voice on the back of the postcard by typing their message in a free form that populated in real time onto the digital card.

NEA then issued an urgent call to action to support and protect our friends, fellow teachers, and students. We asked supporters and members to send virtual postcards to Congress, demanding they pass the Dream Act immediately.

To generate postcard submissions, NEA developed a robust email and social media strategy, using the voices of Dreamers through stories, poetry, photos and video and driving people towards the postcard landing page. The postcard imagery was also used for press events, rallies, and local events at the state and local affiliate level. Ultimately, the virtual postcards were delivered to key members of congress in-person with the names of concerned constituents provided on flash drives.

In order to fill out a postcard, users were directed to provide demographic information, including ZIP code, profession, and email address. Not only did this inform us about who was taking action, we were also able to target them by congressional district as lobbying efforts increased.

Offline, the visual of the postcards was used in several events on Capitol Hill, including the largest act of civil disobedience organized by immigrant rights groups around the Dream Act. Proudly holding our postcard signage, NEA Executive Director John Stocks, along with almost 200 DACAmented individuals, faith leaders, civil rights advocates, and other allies, were arrested to show their solidarity and commitment for Dreamers.

The unique intersection of art, an engaging online digital activism tool, and on the ground organizing allowed us to mobilize tens of thousands of educators and Dreamer allies.

More than 15,000 individuals submitted at least one postcard, which were delivered in-person to members of Congress. About 15% of those that signed a postcard also signed up to get text message alerts. These individuals got an alert asking them to call their member of congress, and about 30% did.

This campaign also led to hundreds of thousands of social engagements across Facebook, Twitter and Instagram and a considerable amount of press coverage for NEA's involvement in the movement to protect Dreamers.

The butterfly artwork has become the symbol for Dreamers across the nation. Our downloadable art has become synonymous with the movement and the fight to protect DACAmented educators and students.

Through this campaign, we've built a reliable and energetic audience of activists that are eager to advocate for Dreamers and social justice issues that affect students and educators. Because this is an audience that we can continue to grow and engage with on future campaigns, we are now in a better position to win fights that have yet to come.

Video for Butterflies for Dreamers 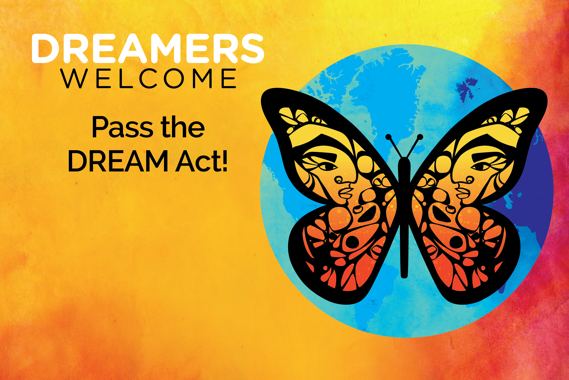