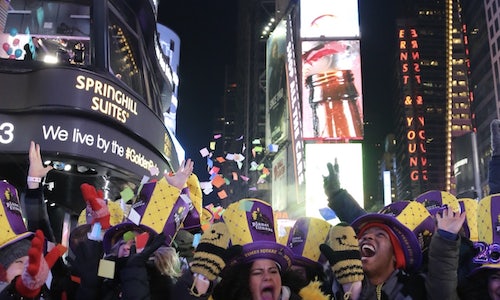 Bringing on the 👍 New Year with Planet Fitness

The goal of New Year's Eve for Planet Fitness is simple: own the busiest and most competitive time of the year in the health and fitness category.

With millions of consumers making health and fitness resolutions for the new year, January represents the most important period of the year for fitness clubs looking to attract new members. But it's also the period most saturated with promotional messages from health and fitness brands. To rise above the competition and smash ever-increasing joins goals, Planet Fitness had to make a splash on the eve of the New Year to become the brand that is most strongly and indisputably tied to the New Year. To do this, we returned as presenting sponsor of NYE in NYC and threw the biggest, coolest (literally) party of the year.

But given that this was our third year as presenting sponsor, one additional challenge rose to the top of the brief for 2018: how do we keep things fresh for returning audiences while extending our positive message to the tens of millions of members and prospects outside the traditional reach of this partnership?

For our third year as presenting sponsor of Dick Clark's New Year's Rockin' Eve, we knew we had to bring something new to the party and connect with our audience in more places than just in Times Square and on TV.

So beyond the international TV broadcast, digital billboards in Times Square, sponsored live performances, and tens of thousands of Planet Fitness-branded hats and balloons, we knew we had to include additional touchpoints to capture the full attention and engagement of our audience before, during, and after the night of New Year's Eve itself.

We mapped out the customer journey for a typical American celebrating New Year's Eve and followed them along the emotional index from anticipation and excitement to gluttony and resolve. Our research helped us create audience profiles that we could target with specific messaging related to the New Year, and then later retarget with the appropriate joins messaging beginning January 1. Doing so helped us focus on creating fewer, better pieces of content that would truly push the needle for both the brand and the business.

To expand the touchpoints of our NYE takeover, we enlisted the help of a few friends. First, we partnered with 2017 Instagrammer of the Year Doug the Pug to create exclusive content that mirrored the customer journey before, during, and after New Year's Eve. Doug was the perfect fit for Planet Fitness, as his love for pizza and judgement freedom shine through in all of his original content. His story – from feeling out of shape, to celebrating New Year's Eve at home by himself, to putting his new membership to use in the New Year – offered audiences the chance to follow along and see their own struggles and challenges reflected in his journey.

We also took an influencer-first approach to our branded portion of the New Year's Rockin' Eve broadcast. During the on-air integration, we had megastars Ciara and Jenny McCarthy help us present Be Free Awards to two celebrities who chose to live judgement free lives in 2017. This year, the iconic golden thumbs-up trophies were awarded to Ariel Winter from ABC's Modern Family and Yara Shahidi from ABC's Black-ish, both of whom have been making serious waves in the social space over the last year. We then had these celebrity partners post about the New Year's integration before, during, and after the night of the event to build momentum, expand the reach of our messaging, and keep the party going well into 2018.

These influencers, in addition to our sponsored performers The Kinjaz and partners like the Times Square Alliance, helped bring massive scale to the reach of our content by covering the event from their respective social channels. And for our own channels, we were there with a team of social media experts to capture every moment and share the fun and excitement with our millions of fans and followers around the world.

For those watching the broadcast at home or partying with us in Times Square, the NYE takeover by Planet Fitness was unmissable. So much so that "Planet Fitness" quickly became one of the top trending topics nationally during NYE on Twitter, where interactions about the Planet Fitness-sponsored broadcast were up 85% from last year.

As for the bet we placed on creating fewer, better pieces of content? You could say it paid off. Our content reached more than 16 million people and garnered over 2.5 million video views. Meanwhile, the branded posts from Doug the Pug's handles quickly became not only his best-performing sponsored content of all time, but in some cases, his best performing content of all time in general. Overall, we created a third fewer posts compared to last year, but saw nearly 4 times the reach, 9 times the engagement, and more than double the overall engagement rate compared to last year's coverage of the sponsorship.

But social chatter, reach, and engagement rates tell only half the story. The primary goal of this sponsorship has always been to own the most important part of the year for the health and fitness category. So how did we do? Not only did we shatter previous records for hourly and daily web joins post-NYE, but following NYE 2018, brand and ad awareness were at their highest observed levels to date. Even more telling, PF is the only brand among its competitors to see significantly higher ad awareness after the NYE period. 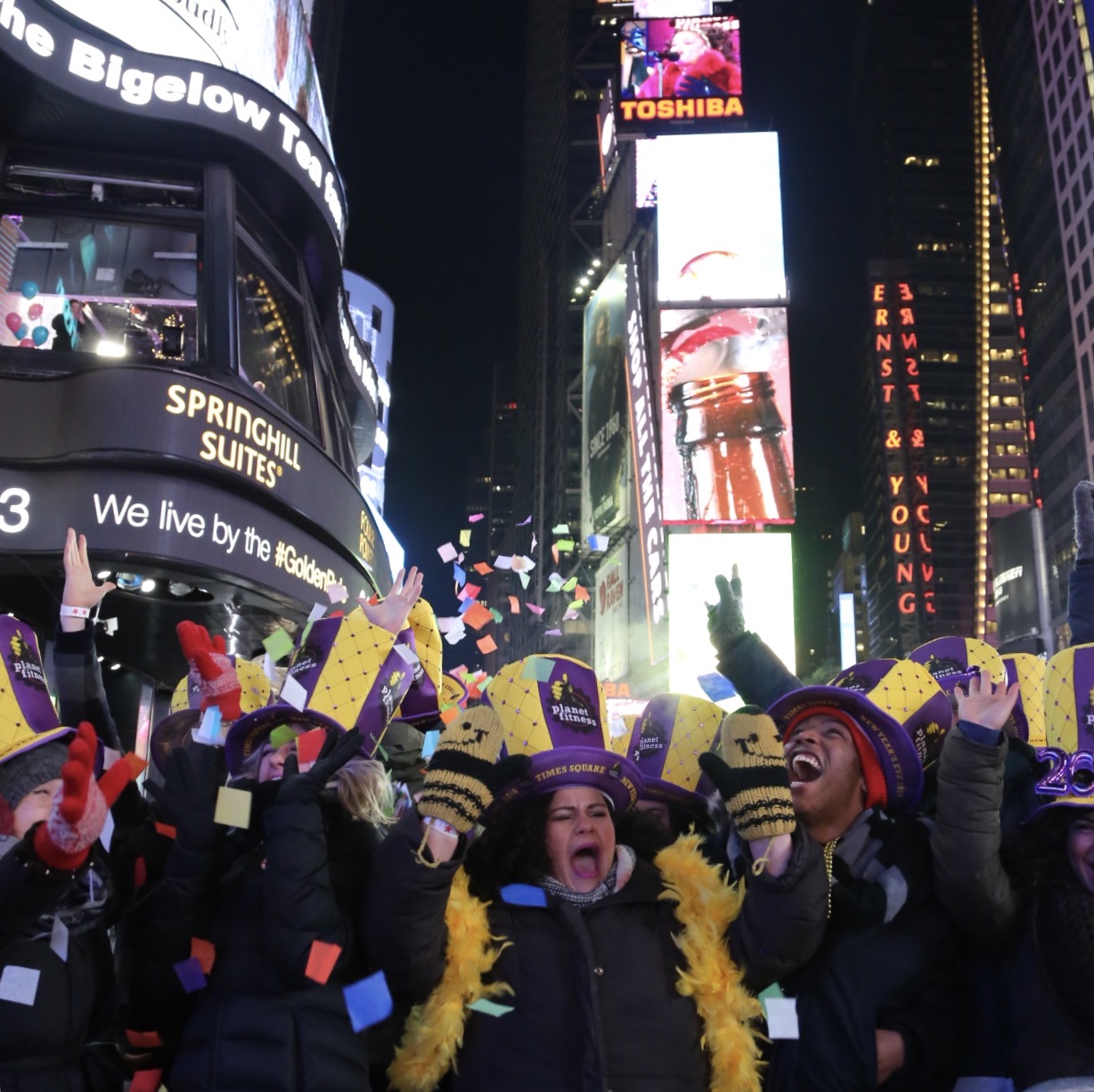 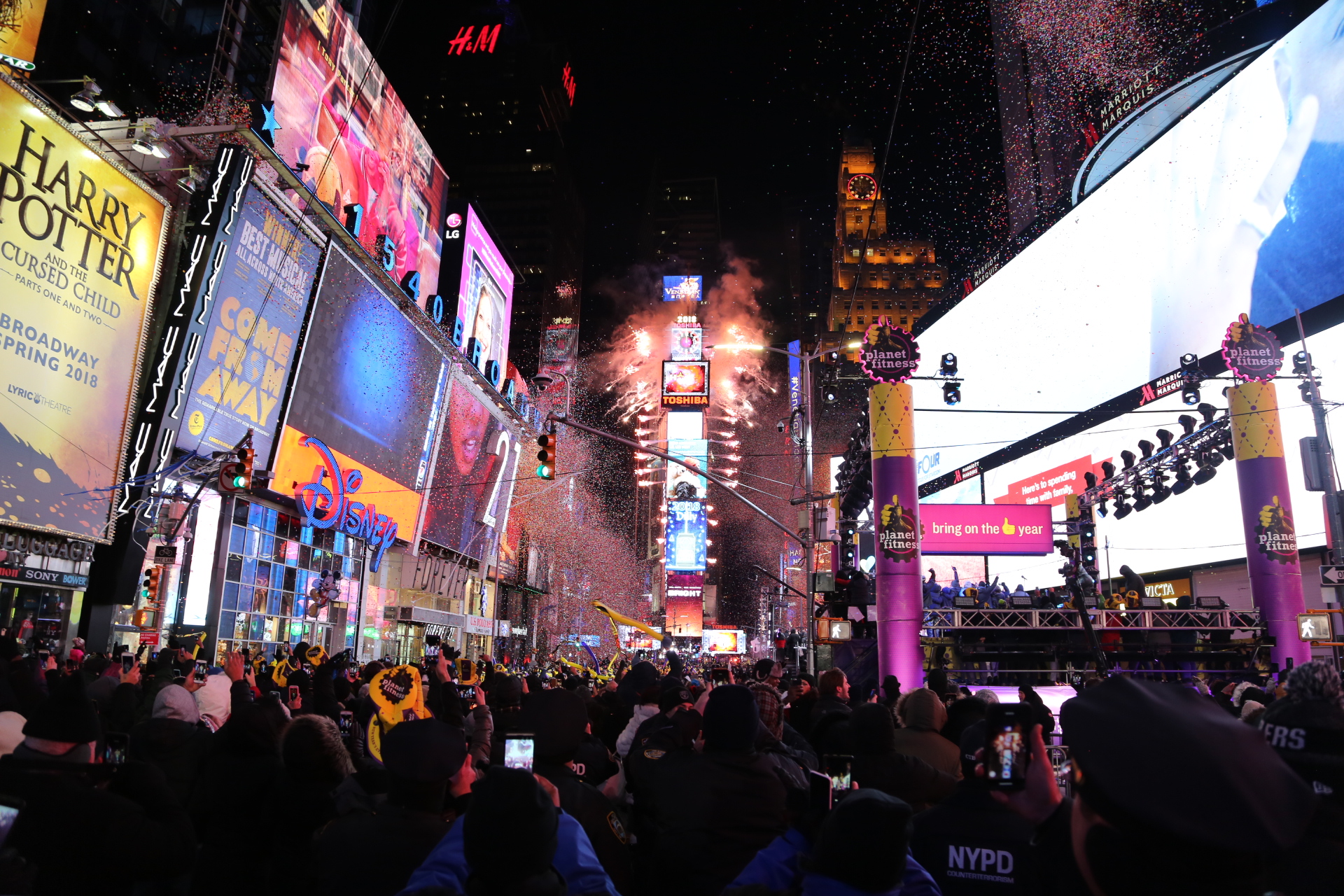 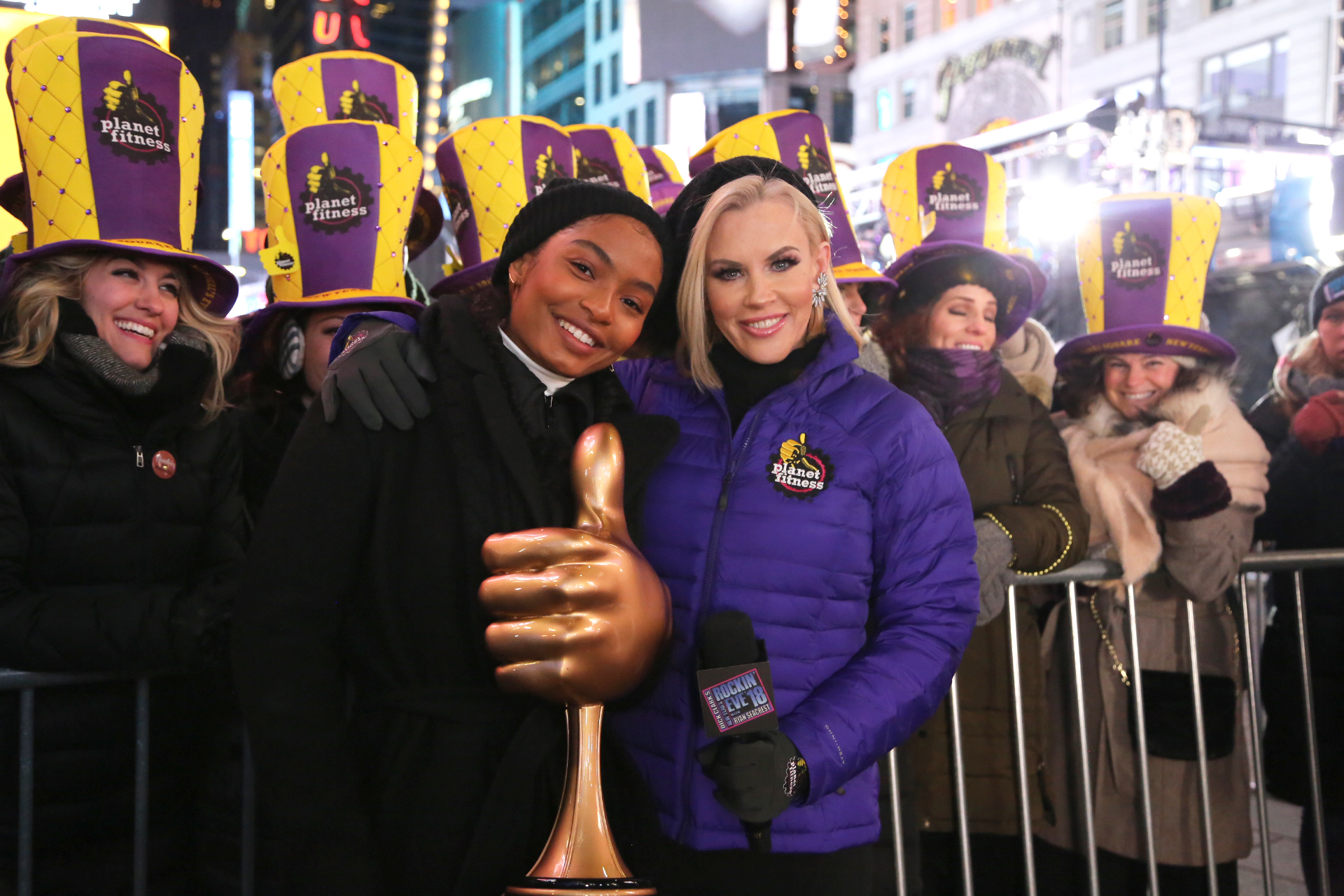 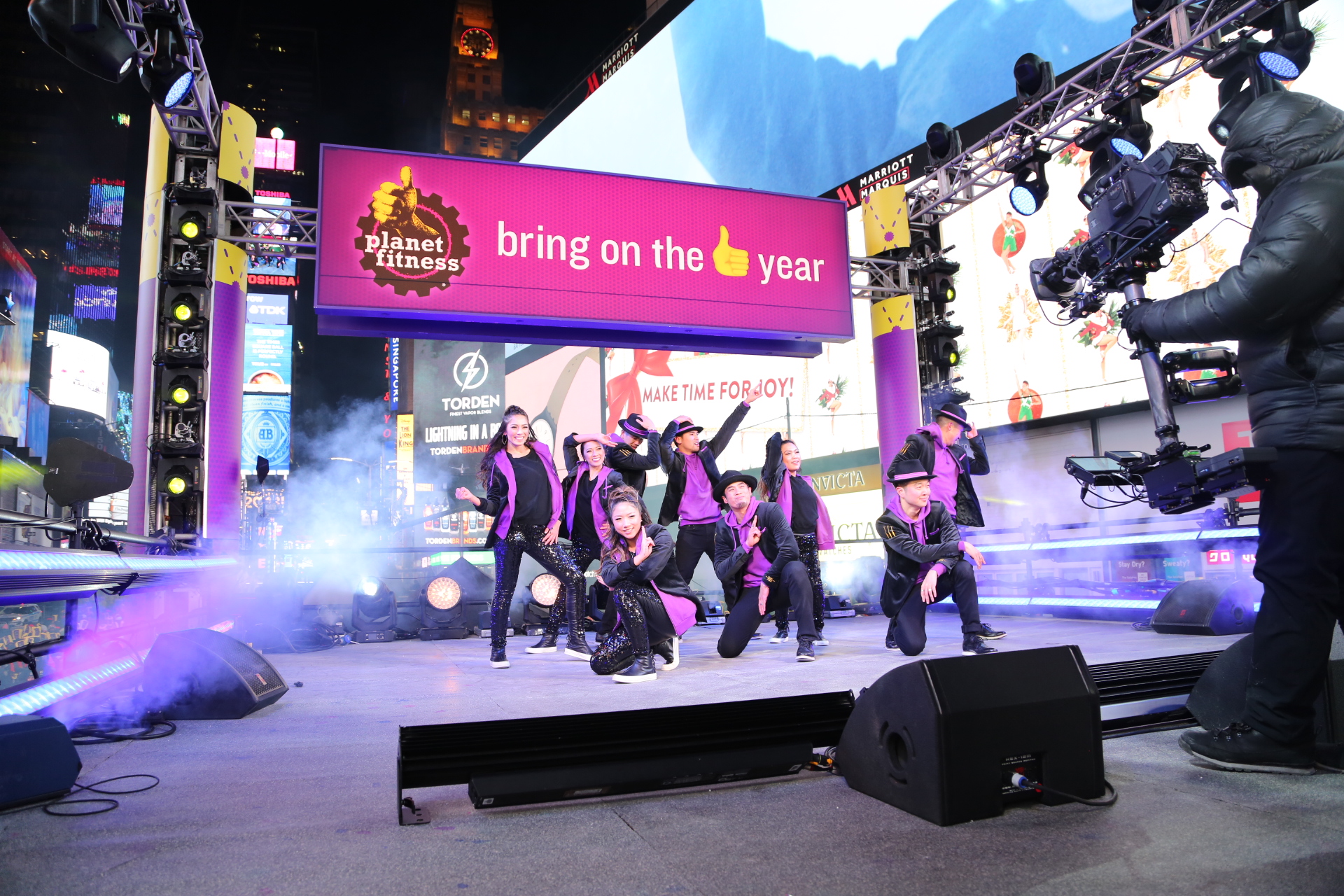 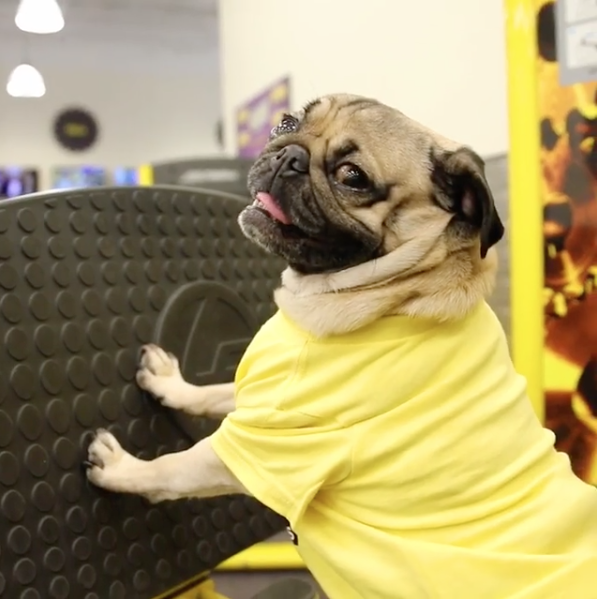