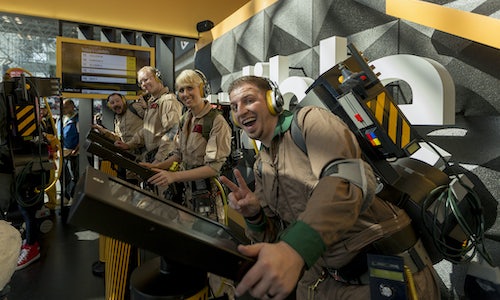 Audible is the world's largest producer and seller of spoken word content. With over 400k titles in their library spanning across 26 literary categories, Audible has the power to entertain, educate and enlighten the masses.

In 2016, Audible decided to launch a new experiential campaign designed to heighten awareness for their engaging content. They also wanted to position themselves as an innovative, tech-driven, entertainment company. To accomplish this, they decided to build brand connections at a place where imaginations thrive, New York Comic Con.

New York Comic Con is the largest pop culture conference in America, uniting comic book fans, anime lovers, gamers, and entertainment enthusiasts all under one roof. At this venue, over 170k fans congregate to interact directly with content creators, network with artists and most importantly, experience unique activations. With so many trendsetters in one location, Comic Con is the perfect place for Audible to promote titles from their vast Sci-fi and Fantasy library. But how do you encourage fans to sample audible books at a convention that features 840k square feet of intense visual simulation?

Our key objective was to deliver a unique, shareable experience that sparked excitement and increased usage of Audible's audiobooks.

To accomplish this, we needed to:

- Demonstrate the immersive qualities of audio

The activation was so successful that we returned in 2017 with one additional goal:

Sci-fi and Fantasy enthusiasts are massive consumers of media who pride themselves on their knowledge of stories and characters. They are also highly competitive and often engage in fan debates on websites such as Gizmodo's, io9. To engage these admirers, our strategy was to create an immersive experience that challenged and celebrated their expertise while providing sampling opportunities for Audible's premium content.

Audible Recall, an immersive trivia game where 7 players compete to demonstrate their knowledge in a race against the clock.

We challenged fans to listen to a set of 15 second Audible clips from some of Audible's numerous Sci-fi and Fantasy titles. Their goal? To match the clip with one of out four book titles presented to them on screen. The faster and more accurate the response, the more points they received. At the end of the round, the player with the highest score was declared the winner.

To house Audible Recall, we erected a sleek, 20x20 foot booth devoted to the Audible brand. We built seven audio stations, complete with touchscreens and headphones. Behind the stations, the Audible brand name was displayed with enhanced illumination capabilities, allowing the letters to function as high score indicators. We also constructed a digital leaderboard where players could track gameplay in real time and monitor their progress throughout the day.

As for the experience around Audible Recall, we included several crowd engaging tactics.

Relevant Audible books: By focusing gameplay on relevant Comic Con titles, we were able to introduce avid readers to a completely different medium, heightening awareness for the brand.

Audible Brand Ambassadors: Adding Audible employees as Brand Ambassadors allowed us to introduce a human element to the brand/consumer relationship. Current and potential Audible users were able to ask questions in real time while brand employees witnessed the positive influence their work has made in people's lives.

Audible Branded Prizes: All players were given a VIP card for a 30-day free trial of the Audible app plus a free audible book download of their choice. Winners of each individual round were awarded a t-shirt featuring Audible content on the back. Lastly, daily Grand Prize winners were awarded a pair of Master & Dynamic headphones, a nod to one of Audible's ongoing partnerships and a perfect tie-in to the Audible product.

Crowd Engagement: To keep the crowd engaged, Audible also included an energetic, gameshow style emcee. The emcee successfully amped up excitement for the players, spectators, and those on line. Also, by putting emphasis on the digital leaderboard, Audible was able elevate participation by heightening the competition. With a grand prize on the line each day, eager attendees returned multiple times in effort to maintain their reign as top scorer.

Onsite photo sharing: Using the fun and eccentric cosplayers as our backdrop, our onsite photographer captured some great photos of players before, during and after gameplay. Players could then share their photos on social via our social sharing station.

For two years, Audible Recall has activated at NYCC with amazing success.

"I am seriously considering Audible now."

Two kids, Hunter, and PJ, became friends while playing Audible Recall in 2016 and returned in 2017 with the sole intention to play once more. They hung around the booth for the whole day and played the game over 50 times.

We even had a super fan propose to his girlfriend, also an Audible fan, mid gameplay. She said yes!

Overall, Audible Recall has been a huge hit for the brand. Aside from completing two successful activations at NYCC, we also adapted the game to highlight Audible's other offerings. We successfully reinvented the experience for the Romantic Times Booklovers Convention to promote Audible's romance titles and we also managed to stimulate the minds of the tech community in Cambridge during an Audible brand hosted Hackathon. These outstanding performances prove that Audible Recall is truly an experience worthy of Audible's diverse library. And of course, we will be returning to New York Comic Con in 2018. 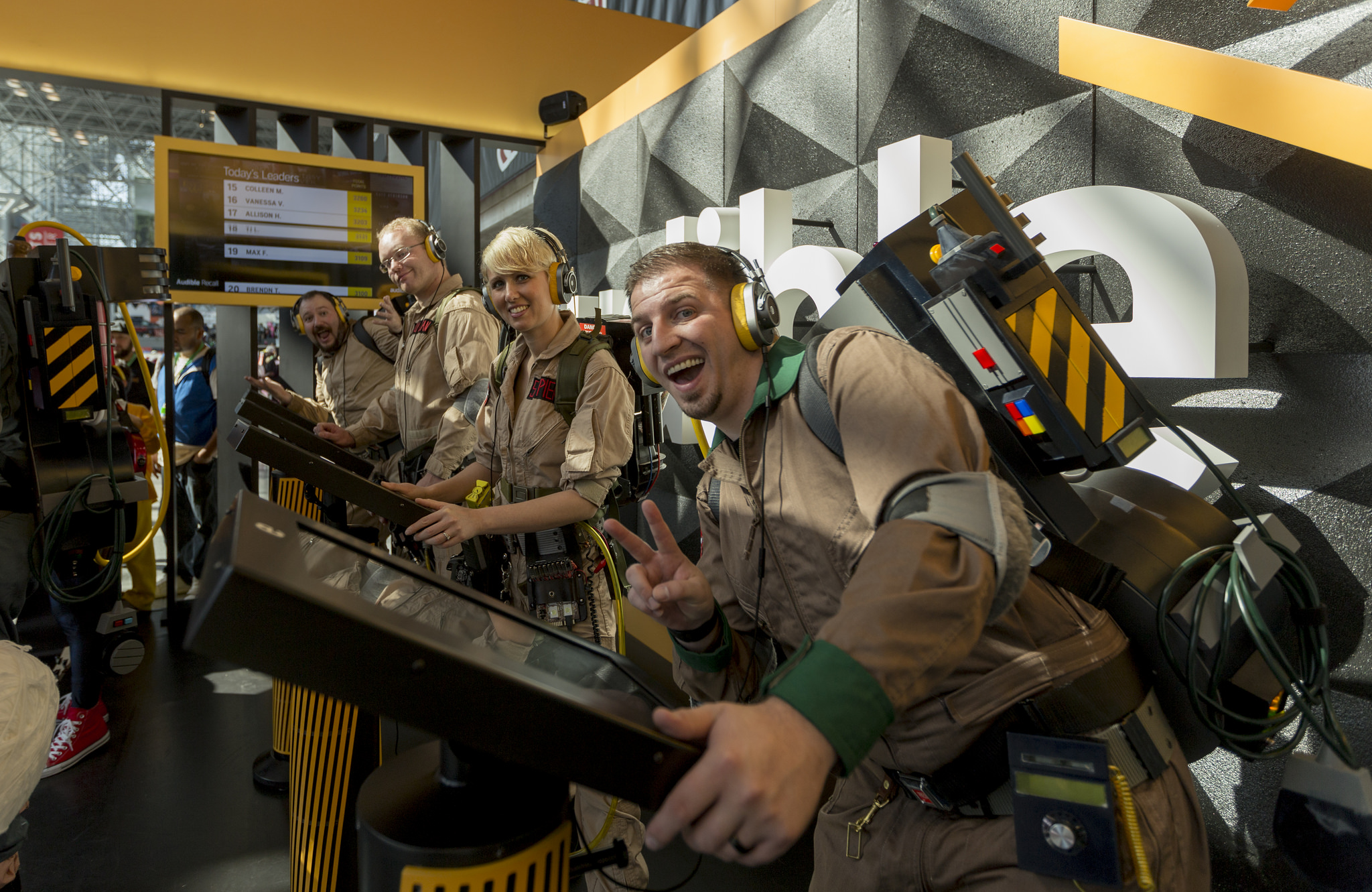 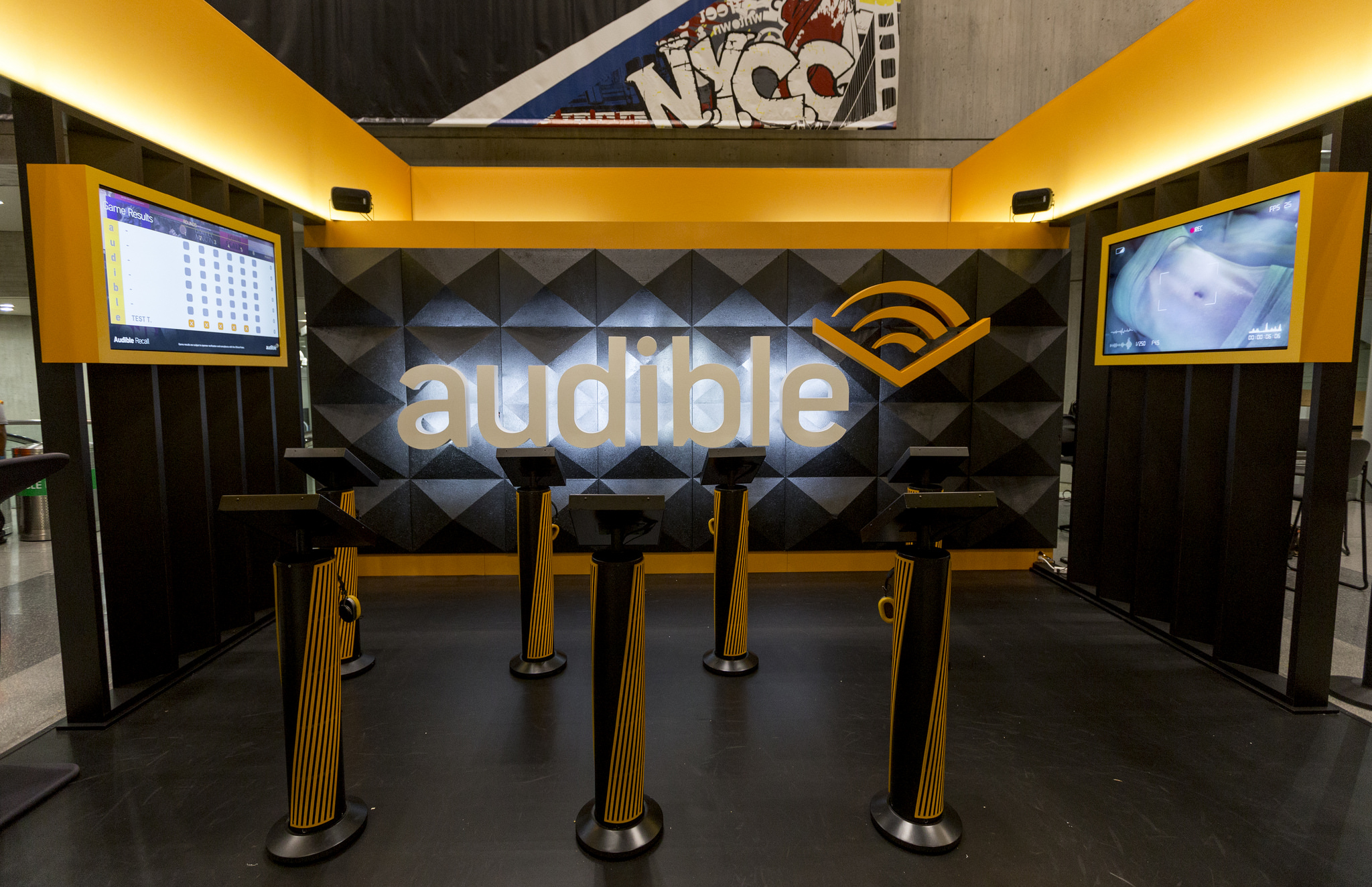 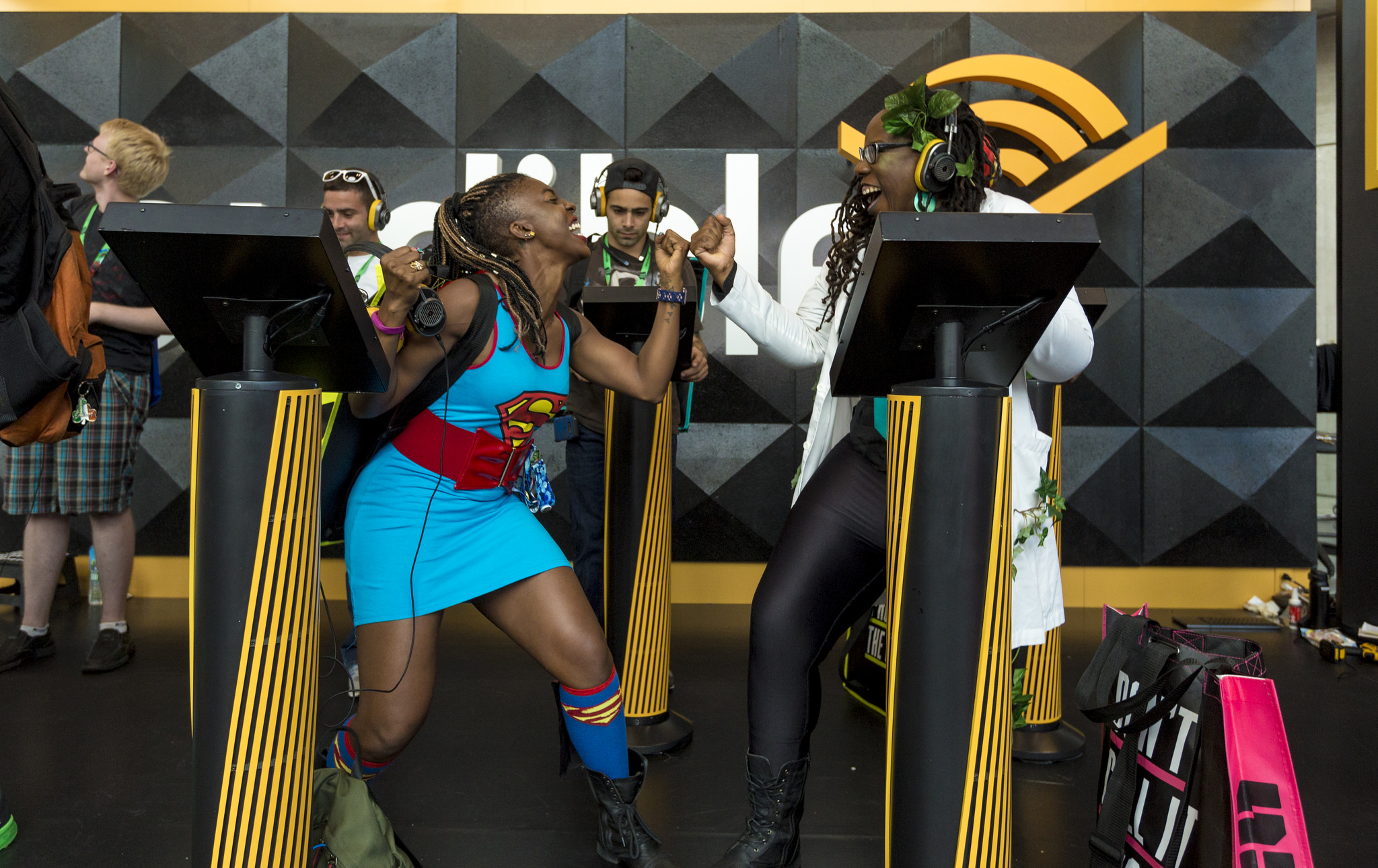 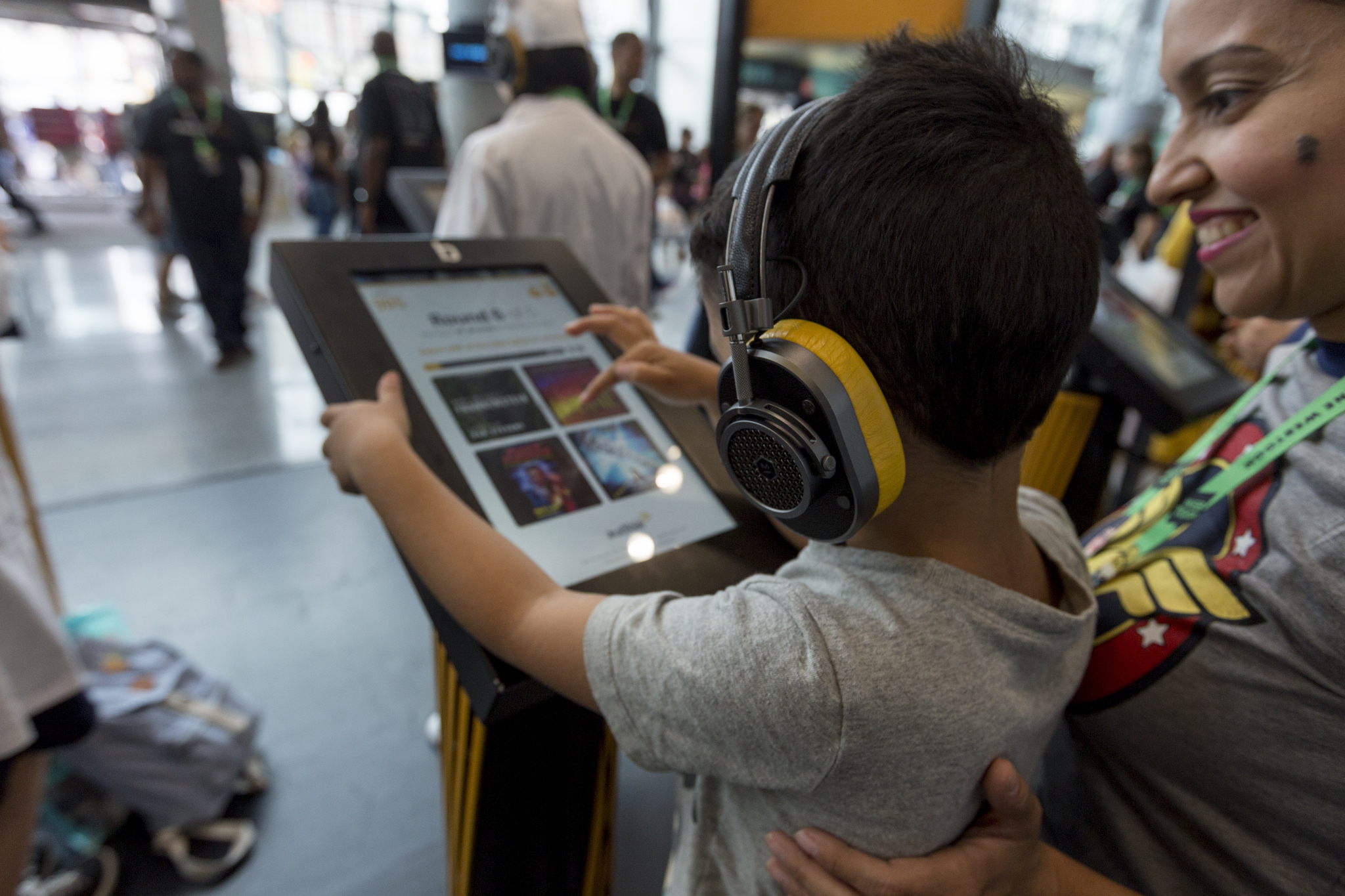 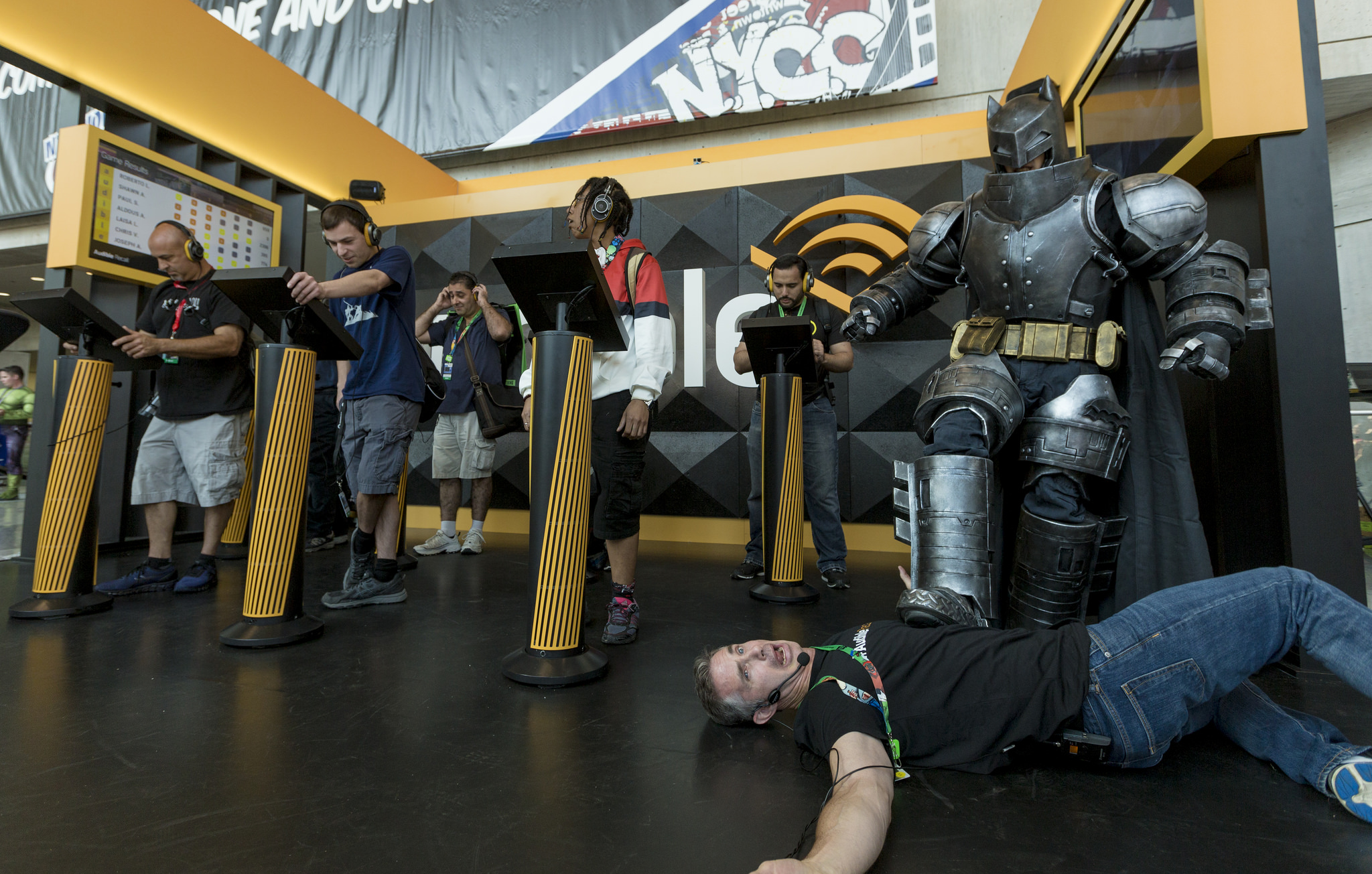