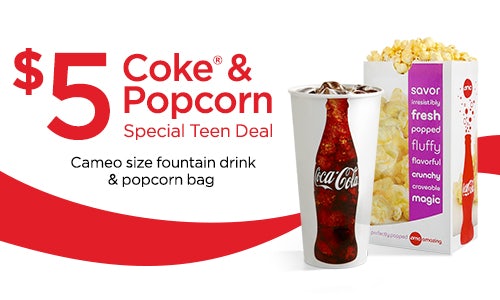 Since 2015, AMC Theatres and Coca-Cola have partnered on an integrated marketing campaign in an effort to drive teen attendance and concession purchases at AMC. The #cupgrade program – which provides teens with an exclusive Coke and popcorn offer each quarter – has continued to evolve over the years; however, the overall goal has remained the same: motivate teens to choose AMC Theatres and take part in the ritual of enjoying a Coke and popcorn while at the movies.

In 2017, the team evaluated historical guest traffic data – as well as the results from the 2016 #cupgrade campaign – and set a goal to drive nearly 600k teens to redeem the $5 Coke and popcorn #cupgrade offer at an AMC Theatre.

Additionally, we looked to raise awareness about the offer among teen consumers and their parents – who, at times, make the purchasing decisions for this age group – through impressions, engagements and site visits.

Digital Tactics: In order to drive teens to choose AMC, we implemented awareness campaigns across the following channels:

Creative was updated weekly to support teen movie premieres and relevant seasonal trends, such as summer and winter break. Although Coke and popcorn were always the heroes, the offers and supporting creative varied to align with different seasons. ICEE Coke, for example, was introduced in the summer to bring a fresh look and feel to the campaign.


All digital tactics drove consumers to the offer landing page, amc.coke.com, where they entered their birthday information. As part of Coca-Cola's responsible marketing initiatives, the age gate confirmed children less than 13 years old were not receiving the offer. Once they passed the age gate, consumers could save the offer to their mobile wallet or camera roll. Consumers who downloaded the pass would receive a push notification when new #cupgrade deals were available, and when they were within a mile of an AMC.

Influencer Outreach: Snapchat influencers were leveraged to provide a direct and authentic line of communication with our core audience. We partnered with five medium- to high-reach influencers, who created approximately ten playful and engaging Snaps of their experiences at AMC and demonstrated how a Coke and popcorn completes the moviegoing experience. To target moms – who often make purchasing decisions for teens, especially those between 13 and 15 years old – we engaged a network of mommy and savings bloggers to inform parents of the teen-only deal.


Direct Tactics: Additionally, to ensure we engaged all teens – even those who may have missed our #cupgrade message before visiting the theatre – we implemented Box Office handouts that were given to teens upon arrival.

Ultimately, there were more than 250 active, consumer-facing tactics implemented. To evaluate the success of each tactic, we created unique offer codes and URLs that provided detailed engagement and redemption results. Each unique offer code was scanned at concessions, and the data was reported weekly. This allowed us to go beyond impressions and click-through rates, and quickly understand which tactics actually drove consumers to take action, as well as determine which creative needed to be updated or replaced if it was not performing as expected.

Going a step further, we leveraged Coca-Cola's Knowledge and Insights Team to perform a qualitative study and evaluate overarching program success. Through this research, we polled teen moviegoers throughout the year to determine if overall awareness of the campaign was increasing.

In total, the 2017 #cupgrade campaign drove nearly 1 million teens to redeem the $5 Coke and Popcorn offer – surpassing the program goal by 157%. All consumers were required to show their student ID before making a purchase, which confirmed teens were the only age group redeeming the offer.

In addition to social reach, the research obtained from Coca-Cola's Knowledge and Insights Team proved that overall awareness of the program increased 25% from 2016.


Digital Tactics: Approximately 1.5 MM people clicked on one of the 207 digital tactics, which accounts for 18% of all redemptions. Of those who downloaded the digital offer to their mobile wallet, nearly 30% redeemed the offer at AMC.


Direct Tactics: The number of consumers who redeemed the offer using the Box Office handout or other direct-to-consumer tactics increased by more than 53% when compared to 2016. 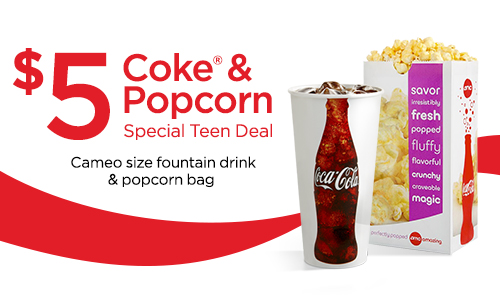 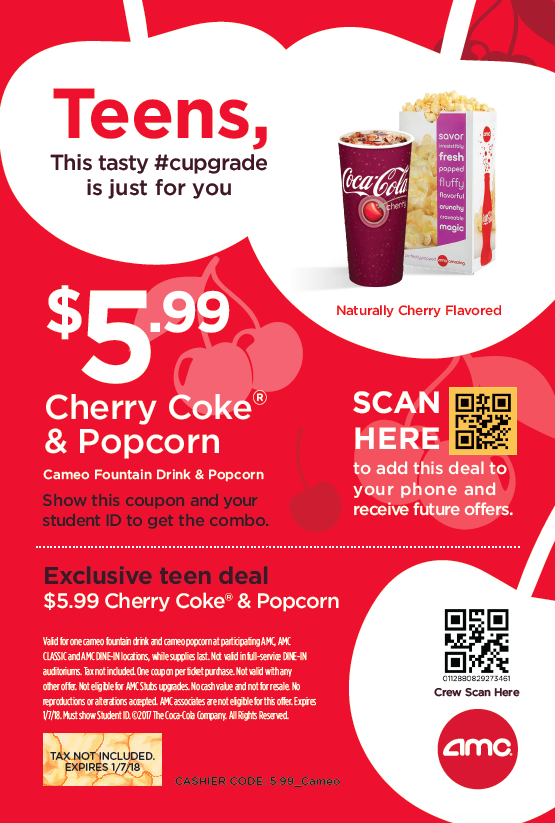