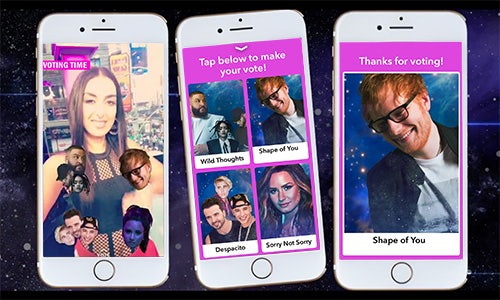 For 2017 VMA Snapchat Coverage, we strived to meet the following goals:

- Establish an unmissable presence on our audience's most-used platform

Each year the team endeavors to evolve the VMA social voting category by exploring never-before-used methods and platforms to engage with our audience. For the 2017 VMA 'Song of Summer' category, we partnered with Snapchat to launch a 47-hour voting window via Our Stories. The published edition included fan-generated snaps, a rundown of the nominees, and a click-to-vote mechanism. The category was sponsored by Verizon.

The VMAs were profiled with an unprecedented five Our Stories on the platform: Song Of Summer voting, VMA Countdown, Red Carpet, Watch Party and The Show. These curated, global stories showcased snaps direct from celebrity talent and fans as well as archival clips and show footage. Snapchat representatives on the ground captured video from the venue, and MTV produced platform-specific clips from backstage to add our voice and editorial insight to the overall story.

MTV producers were placed in strategic and covert locations at the VMAs to capture snaps that gave fans a uniquely MTV vantage point.

The VMA-themed lens was one of the early uses of front and back 'world lenses' showcased nationally on the platform; front-facing view outfitted the user in an astronaut helmet, mirroring the overall VMA campaign key art, and rear-facing unveiled a series of AR planets as the user panned around their environment.

The Song Of Summer category (sponsored by Verizon) was Snapchat's first execution of voting within in an Our Story. Over 47 hours, the category generated 600% more votes than the mtv.com 2-day vote average.

Snapchat Discover Show Day Edition saw a view increase of +23% YOY. The entire VMA campaign on Discover saw a +95% jump in views YOY. The Post Show edition brought in record-high viewership, becoming the top-performing edition since launching on the platform. 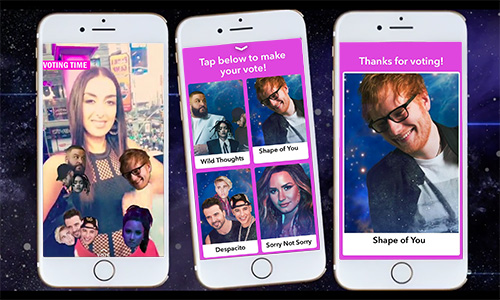