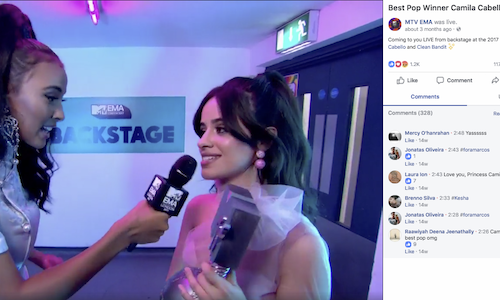 To extend the reach of the MTV EMA Facebook page, we took advantage of the platform's features in both simple and novel ways.

We aimed to drive up engagement on the EMA Facebook page by consistently publishing the kind of content that young music lovers enjoy and share on their timelines. During the 2017 campaign, we produced 222 pieces of high-quality content for Facebook. In the weeks leading up to the 2017 EMA, we used archival footage from past EMAs to create various types of share-worthy video content including relatable memes featuring fan-favorites like Beyoncé and informative videos about the nominated artists.

Translating and localizing our captioned videos, memes and other relevant copy was a huge priority during the 2017 campaign as we were intent on making the EMA Facebook videos enjoyable for music fans around the world. Our team worked closely with the social media managers of local MTV pages, like MTV Germany and MTV Brasil, on translating and localizing EMA content for their audiences.

We used Facebook Live to bring live coverage of exciting EMA events to as many people as possible. A month before the EMA, we used Facebook Live to stream an exciting, interactive interview aboard the London Eye with the show's newly announced host, Rita Ora. During EMA weekend we used Facebook Live to simulcast videos of highly-anticipated events, such as David Guetta's live performance in London's historic Trafalgar Square, the EMA red carpet, and backstage interviews with performers like Camila Cabello and Shawn Mendes. Additionally, we leveraged a group of international influencers to host Facebook Lives on local MTV accounts while on the red carpet, capturing all the action in their native languages.

We took several steps to make fans at home feel like they were truly part of the events they were watching on Facebook. During the Facebook Live streams, we had the talent on screen speak directly to the viewers and ask the viewers to submit questions in the comments. We also used lower third graphics to instruct viewers to react to what they saw on screen with emojis.

We also relied on actions as straightforward as tagging posts to get specific content in front of the right audiences. For instance, the announcement that U2 was the 2017 Global Icon award winner easily reached U2 fans who did not follow the MTV EMA page.

After the show, we took advantage of the premium EMA video content at our disposal and populated our Facebook page with videos of the very best moments from the 2017 EMA. Whether a highlight clip, a performance or an exclusive backstage interview, we made sure the fans' favorite EMA moments were readily available and easy to revisit on Facebook.

Our use of Facebook during the 2017 campaign proved to be hugely successful. The MTV EMA Facebook videos were viewed a record-breaking amount of times, MTV EMA trended on Facebook the night of the show and by the end of the campaign the page's already huge following had grown even larger.

The MTV EMA Facebook videos were viewed over 46 million times and the MTV EMA and local MTV posts on Facebook were engaged (liked, shared, or commented on) over 1.4 million times.

Simulcasting on local MTV pages, such as @MTVGermany or @MTVBaseAfrica, also proved to be a great way to reach and engage Facebook users beyond the MTV EMA page. When South Africa's favorite It Girl, Bontle Modiselle, hosted a Facebook Live from the EMA red carpet, it was viewed over 800k times on the @MTVBaseAfrica Facebook page.

We began the campaign with a whopping 2.2 million follower count on Facebook and ended the season with an additional 95k followers. 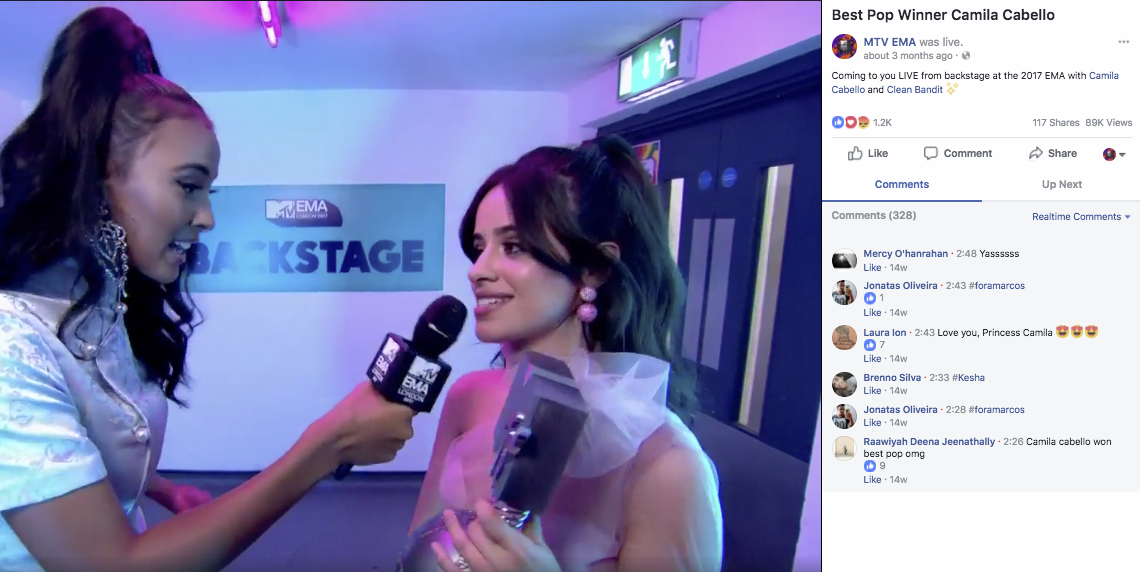