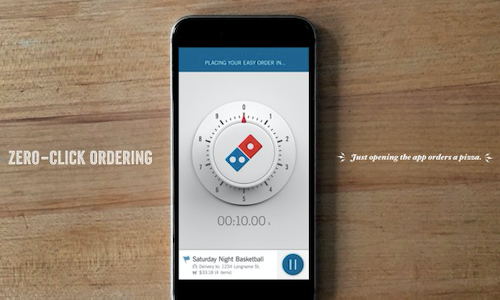 Digital orders are more profitable to Domino's, and yield a higher customer satisfaction rating. In 2011, the goal was set to move the business from just over 20% digital sales, to over 50% by the end of 2015. With the help of Domino's AnyWare, a new suite of technology that makes it possible to order pizza on more devices than ever before, that goal was reached and surpassed. For 2016, Domino's needed to find new ways to drive buzz and awareness for ordering Domino's online. In addition, Domino's CEO Patrick Doyle charged the company with this request: make it so a customer could order a pizza while waiting for a stoplight.

Last year, Domino's introduced emoji ordering and many other easy ways to order pizza as part of the Domino's AnyWare suite of technology. But many still 1-click as the standard in e-commerce ordering.

Not anymore. Introducing the Domino's Zero Click Ordering App. Order by simply opening the app. That's it. Not a single tap, swipe, or click needs to be made in the app to place the order.

After first downloading the app, users sign in to their Domino's Pizza Profile to access their saved favorite order. The next time they open the app, the order is automatically placed. A 10 second countdown gives users time to cancel in case the app was opened by accident.

The introduction of Domino's AnyWare, a new suite of ordering technology, in 2015 generated billions of earned media impressions, and was the center of a television campaign that drove double-digit year over year sales growth for Q4.

In 2016, Domino's wanted to continue that momentum and generate new news with a new online ordering innovation. The target audience was the press and Domino's super users and influencers.

In the e-commerce space, 1-click ordering is regarded as the pinnacle of simplicity. We had the opportunity to beat it with the creation of the Zero Click App. It was developed for both Android and iOS, giving it 95% market reach in the United States.

The creation of the Domino's Zero Click Ordering App for iOS and Android was only possible because of the groundwork laid by previous Domino's digital innovations. A couple years ago, we introduced Pizza Profiles, allowing customers to save their payment info, addresses, and an Easy Order. An Easy Order is your favorite food order bundled with your preferred payment method, order type (delivery or carryout), and address or favorite store.

The combination of Pizza Profiles and Easy Order makes it possible to order by simply opening the Domino's Zero Click Ordering App (after a short setup process where the user signs in to their Pizza Profile to access their saved Easy Order).

A 10 second countdown gives users time to cancel in case the app was opened by accident. Once the order is placed, the app automatically transitions to Domino's Tracker so users can follow the progress of their order.

The app launched on April 6th so we've only had a few weeks to capture results, but thus far the Zero Click App has garnered over 448 million earned media impressions from press coverage by Time, Fox News, NPR, Business Insider, Chicago Sun-Times, Fast Company, numerous local television stations, and more. Zero Click also trended on Facebook on the day of launch. All of this was achieved with less than $25k in paid media. 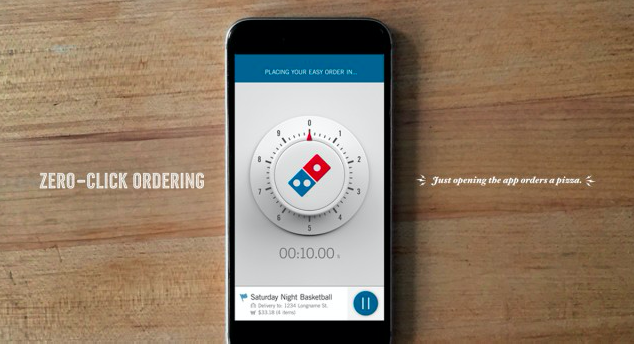