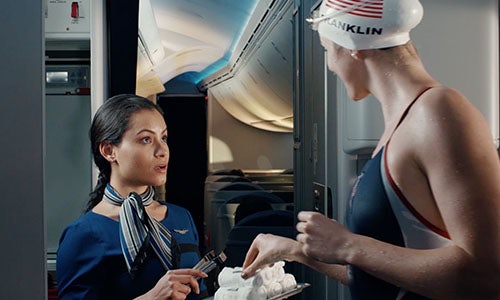 United has been a sponsor of the United States Olympic Committee for 35 years. But we're more than that. We're true partners, supporting Team USA by flying Olympians and Olympic hopefuls around the world to pursue their dreams. Day in, day out, year 'round. We are "the team behind the team" on the athletes' amazing journeys, and with the 2016 Summer Olympics in Rio approaching, our goal was to let our audience know. We wanted to create content that would generate awareness of our sponsorship and resonate with our customers, employees and Olympic fans at large. By virtue of this, we established that United is not only the support team for Team USA, but also the team behind our everyday customers.

Overall, we felt that our enthusiastic support for Team USA would appeal to consumers and our employees, and ultimately increase brand favorability and preference for United.

Pre-roll and Olympic sponsorship content share the same problem: they're too predictable. More often than not, pre-roll ads are an afterthought for brands. Marketers repurpose other content and advertisements without considering how viewers interact differently with ads on YouTube. As a result, it's no surprise viewers have grown to hate pre-roll ads – with 94% saying they skip them if given the chance.

Similarly, most Olympic sponsorship content has become expected. Brands parallel "competition," "performance," and "excellence" in business and sports while showing generic shots of athletes performing. With United's Olympic content, we shifted away from typical YouTube branded content and Olympic advertising. We fit our pre-roll into a larger story about United's partnership with Team USA to draw viewers to our channel.

Our pre-roll contained bespoke creative that differed from our other ads, preventing fatigue for viewers. While the video content was unique to the channel, it still fit into the larger narrative of United as a support team for U.S. Olympians pursuing their dreams. It also tied into the longer form videos on our YouTube page. To further differentiate our pre-roll from standard Olympics ads, we highlighted topics beyond sports. We featured the opening ceremony, the closing ceremony and our unique partner athletes outside of performance and competition. This shift in focus allowed us to appeal to an online audience broader than sports fans.

Rather than skipping United's pre-roll on YouTube, viewers embraced it. 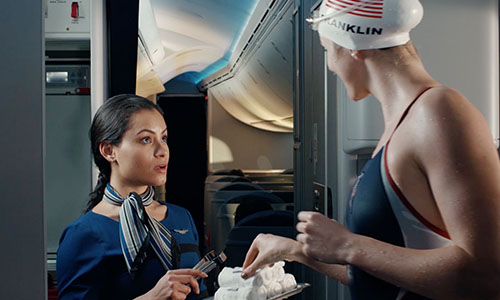