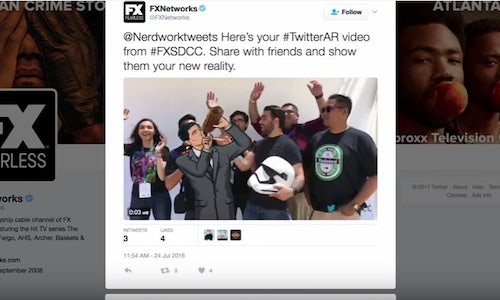 Don't just watch an FX show. Be part of one! At Comic-Con 2016, FX partnered with Twitter to create an interactive experience that allowed fans to experience the worlds of their favorite shows in a whole new way. Through Twitter's new and proprietary augmented reality software (the first time the technology was used in a consumer facing manner), fans created custom AR videos that were shared via Twitter and displayed on the giant LED social screens at the FX Comic-Con event space. The goal was to host an interactive physical space, share new technology, and drive social sharing.

Fans received their video via a direct tweet from FX Networks, or an email. The FX Networks brand Twitter account, and FX show specific accounts interacted with the fan videos and helped spread the social footprint by retweeting and promoting the event. Fans of Archer got a special surprise from the Archer Twitter account, as an exclusive augmented reality video was unlocked with a provided code.

The FX Networks and Twitter Augmented Reality Partnership provided not only a great experience for fans, but also impressive results for both FX and Twitter. Throughout the 3-day event, there were 1,300 unique videos created, and the experience generated over 550 tweets from FX handle. The FX Network account grew by roughly 2,800 followers, and the overall campaign garnered a total of 4.3M impressions 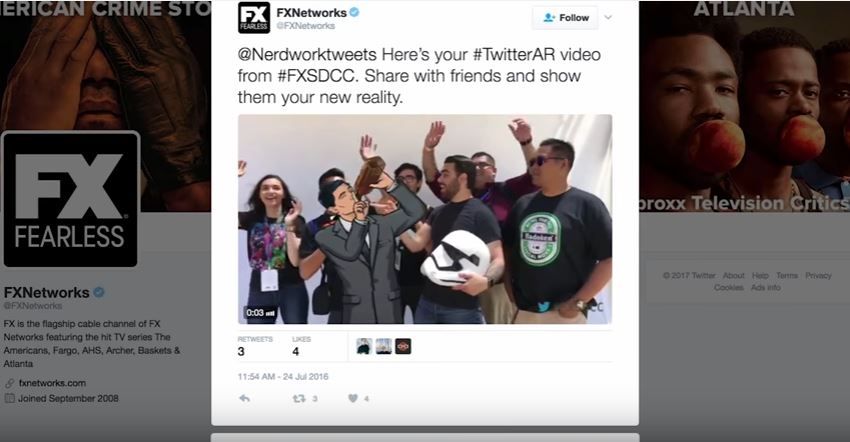