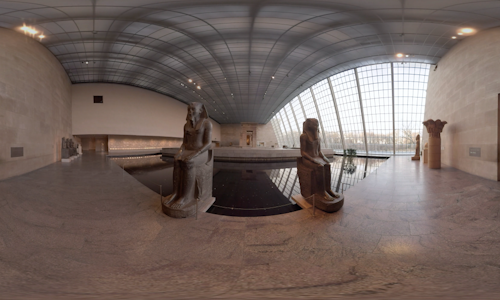 In 2016, The Met's Digital Department used a 360° camera rig to create a series of six short videos featuring iconic spaces at its three locations: The Met Fifth Avenue, The Met Breuer, and The Met Cloisters.

Our goal? To invite new and existing Met fans to "visit" the Museum's art and architecture in a fresh, immersive way, to engage with the media and The Met, and to tell us what they think!

One goal for the series was to offer unique perspective. How could The Met take the lead in using this relatively new format to allow viewers to explore with the Museum as never before?

While most producers of 360 video use camera rigs mounted to simple tripods, we chose instead to push creative and technical boundaries. One example of this was how we strung cables across vast galleries, and even across multiple outdoor gardens at The Met Cloisters. This allowed the camera rig to travel high in the air, covering long distances. The resulting video affords viewers a "bird's-eye-view" and the visceral sense that they're flying. We also used a "mantis" or remote-operated robot as a tripod, allowing camera movement on the ground.

Another goal was to share a unique access, one typically unavailable to the public. We removed protective bonnets covering works of art, captured bustling galleries in time-lapse, or the magic of the empty Museum after hours - all to allow viewers to engage with The Met as never before.

Our aim was to create media that is beautiful, immersive, and transporting, media that, like art, communicates beyond language. We therefore commissioned bespoke music, featuring unique sounds such as the actual bell at The Cloisters.

Above all, this series aims to reflect the Museum's lasting mission to inspire global audiences in diverse ways.

Each video is posted to The Met's Facebook page and on our website. All can be watched on an iPhone, computer, or VR headset.

The Likes, Shares, and Comments on the video series on The Met's Facebook page reflect an astonishing and unprecedented level of engagement that dwarfs traditional viewer response to regular videos on the platform. Since it was posted a few months ago, for example, The Great Hall video boasts 2.4M views, 2K Comments, and 23K shares. (As of 2/14/17)

This engagement reflects both lively domestic and international audiences – with comments in multiple languages. The Temple of Dendur video, for example, was particularly popular with Egyptian community. The Met Cloisters video, with its 360 views across the Hudson river and beyond, has enjoyed 48K Likes to date.

We note many comments from visitors for whom the videos trigger family or other deeply personal memories – spanning childhood to old age - and their desire to return to look at familiar spaces more closely. We also heard from those who have never visited but now pledge to do so.

Comments also reflect a fascination with 360 technology and we're pleased that The Met can be appreciated as a leader using it in fresh and imaginative ways.

Video for The Met 360° Project

The Metropolitan Museum of Art