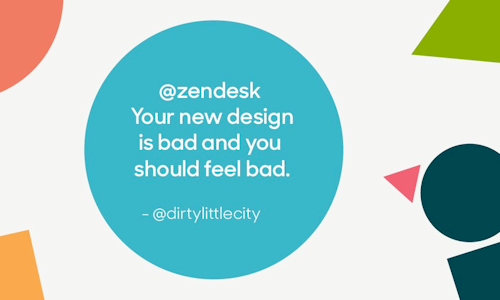 Just like people, brands change. Companies evolve—they reinvent themselves and go looking for something fresh. Which is exactly what Zendesk did.

When we started 10 years ago, our goal was simple: bring a sense of calm to the chaotic and stressful world of customer service. We've done a pretty good job so far, but we know we can do more.

Over the years Zendesk has grown a lot. We've added more people and more products, and we now play a bigger role in helping companies manage relationships with their customers. Now that we've reached a new level, we decided to refresh our brand to reflect this change.

In October 2016, we officially launched that new brand—one packed with more colors, distinct product identities, and a new logo. To spread the word, we coordinated an integrated brand roll-out across multiple platforms, including strategic efforts across each of our social platforms. The primary goal of our social campaign was to spread the word and welcome feedback with our trademark playfulness and humor.

Key objectives of our brand rollout on social included:
- To officially announce Zendesk's refreshed brand
- To support key messaging about our evolved product line-up
- To serve as a feedback channel for our followers and gauge audience reception of the brand change
- To extend buzz around the rebrand beyond launch day

Our social media strategy was to build buzz about the rebrand through a series of staged activities and engagement initiatives. These activities took place on both our launch day and the subsequent days and weeks that followed and included:

1) The Announcement: At the stroke of 7am (PT) on launch day, we took to social media to start spreading the news about our big change, beginning by sharing a blog post by our CEO, Mikkel Svane.

2) Launch Day Audience Engagement: We anticipated strong opinions around our new look and decided to embrace and celebrate the feedback on social media, both positive and negative, with transparency and humor.

3) Launch Event Engagement: Members of our social media team were situated on-site during the formal rebrand launch party. We shared pictures and quotes in real time on Twitter and Instagram (both proper and Stories) from the event to give our audience a peek into the excitement.

4) Post-Event Engagement: In the days and weeks following the event, we shared pictures and videos from the launch night to extend the life of the news.

5) Shout Out to the Haters: Keeping with our playful nature, we chose our favorite "mean tweet" from launch day and featured it across several of our social channels.

We balanced things out by also sharing many of the warm fuzzies we received from our followers.

6) Farewell to The Mentor: 'The Mentor' was our beloved brand mascot who saw us grow from a Danish scrappy start-up to an established global tech brand. Before letting him go, we knew we had to bid our old friend a proper farewell—which we did through a series of images imagining him happily basking in his new retired life.

7) Rebrand Documentary Blog Post: Our oh-so-clever creative team created a light-hearted documentary to show how we landed on our new look. The documentary was circulated across all our social channels using our characteristically playful and cheeky tone.

8) Engagement Question Posts: Using quote images to prompt feedback, we also invited followers to share their thoughts on the rebrand. Like the rest of our post-launch activities, the goal of these quotes was to keep the conversation rolling.

Our social media efforts to support the rebrand were an enormous success — helping Zendesk to generate glowing buzz about our change. We prepped ourselves to receive big resistance (change is hard after all), but to our grateful surprise, the feedback was overwhelmingly positive.

We invited followers to give their opinion and they answered the call.

FAREWELL TO THE MENTOR

Video for The 2016 Zendesk Rebrand 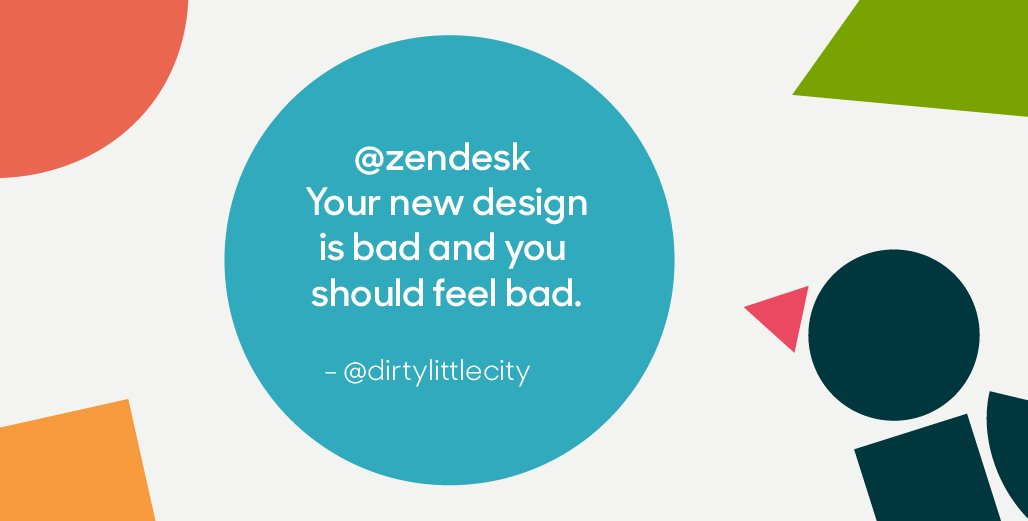