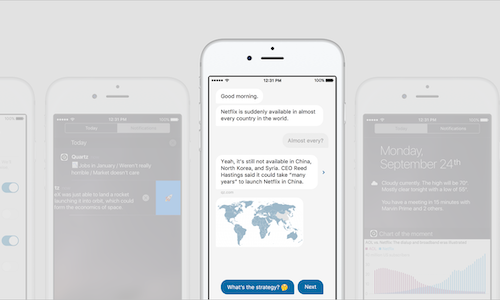 When Quartz launched in 2012, we bucked the trend of the time by choosing not to build an app. We could get more readers with less friction on the web, we reasoned, and nothing we'd want to do in an app couldn't be done with a well-built, well-optimized mobile website. (We think we were right; TK of our TK million monthly users now read qz.com on their phones.)

By last year, though, the landscape was shifting. We still didn't want to just have an app that was just a different version of our website. But two rising trends in mobile -- push notifications and messaging -- hinted at another possibility.

The Quartz iPhone app, launched in February 2016, rethinks news delivery entirely. As we wrote in our launch post, it is "an ongoing conversation about the news, sort of like texting: We'll send you messages, photos, GIFs, and links, and you can tap to respond when you're interested in learning more about a topic." The Quartz Android app later launched in December 2016 to allow more users around the world to join the conversation.

Our news app is a whole new way to experience Quartz. We think of the app in much the way we think of our successful email newsletter, the Quartz Daily Brief: messages from a smart, well-informed friend who tells you the news with a savvy understanding of the world and a touch of humor. Key to that is a conversational writing style and liberal use of emoji and GIFs. Also like the newsletter, the app is not simply another channel to drive readers to qz.com, but a publication in itself; we link out as much as we link to ourselves, pledging to bring our readers the news from whoever has reported it best. The app's interface resembles an automated assistant through bot technology, but the content is written by humans. Quartz writers and editors give the app its voice that informs and entertains.

Mindful of how easily push notifications are abused, we give users the ability to set several different levels of them, from no alerts to several updates a day. They can also choose whether or not to get our markets haiku -- a daily 17-syllable (plus one emoji) summary of movements in the markets.

We are pleased with the app's adoption, which is why we recently expanded into Android (https://qz.com/app/), and continue to make improvements in the app.

The average daily active user checks the Quartz app (across both iOS and Android platforms) twice a day, spending about three minutes inside the app. One metric we track closely is how many taps users make, since that's the primary action you take in the app and indicates engagement. We recently topped 100 million taps.

35% of daily active users get to the end of the app. That means they read all of the content available to them at any time.