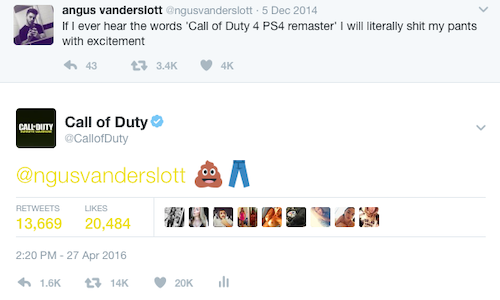 For years, Call of Duty fans have been asking for a remaster of one game in the franchise over any other: Modern Warfare (AKA Call of Duty 4). This was a title revered by millions and one of the most critically-acclaimed games of all time, so we were tasked with giving its return an equally epic announcement.

While Activision had been secretly working on the production of Modern Warfare Remastered to be released in 2016, we knew fans would lose their minds at the mere hint of its existence – so we set out to announce the game in a way nobody would ever expect, with a strategy guaranteed to send shockwaves throughout the core community and into the masses.

To say Call of Duty fans are passionate about the series is an understatement. The community of millions is so tuned into Call of Duty's annual production timeline, that they're conditioned to scour the internet for clues about game announcements at certain times each year. With demands for Modern Warfare Remastered reaching a fever pitch over the years, we knew we had the perfect opportunity for a completely unexpected approach.

Scraping over five years' worth of Twitter conversations for people asking for Modern Warfare to be remastered, we vetted over 18,000 mentions and arrived at a final list of roughly 1,600 fans that we would engage 1-to-1 on Twitter once the word was out about the remaster of their favorite game. Now we simply needed the perfect kick-off to confirm the return of Modern Warfare to the community at large.

In December 2014, a full 17 months prior to our 2016 title reveal window, a Call of Duty fan from the UK with a modest following tweeted, "If I ever hear the words 'Call of Duty 4 PS4 remaster' I will literally shit my pants with excitement". Bingo.

The Call of Duty official Twitter account had never responded to a fan on a 1-to-1 basis by this point, and our rabidly invested fans knew this. So, when Call of Duty responded to a seemingly random 2014 tweet with the simple response of the "poop" and "pants" emojis, thousands of fans and influencers immediately took note, freaked out, and retweeted from the rooftops. Within an hour, our cheeky confirmation had spread like wildfire.

Our poop-pants emoji tweet received over 13,000 retweets in 24 hours and was liked by over 20,000 fans, making it the most engaged-with content on Call of Duty Twitter in 2016 with a +1,497% lift in engagements over the brand's average. The news sparked earned media pickup from major gaming press including Kotaku, IGN, GameSpot, and Polygon. Social conversation sentiment around the game's confirmation was an exceptionally high 65.7% positive, compared to a franchise-wide average of 12.9%. The simple emoji announcement was a resounding success by all measures, and most importantly, drove a massive groundswell of community excitement and goodwill for the triumphant return of a classic. 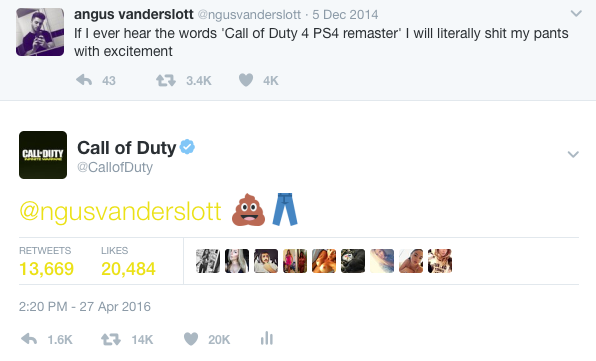