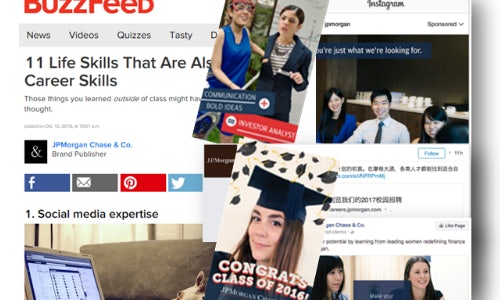 Increase brand awareness of career opportunities and drive applications among broader, non-traditional audiences through a consistent always-on media presence year round, starting early on in the recruitment decision making process.

JPMorgan Chase leveraged high-traffic relevant media partners to increase brand awareness among non-traditional audiences and used proven conversion channels (highly targeted social, job board and programmatic media placements) to drive applications to recruiting events and hiring programs. To appeal to their non-traditional audiences, JPMorgan Chase worked with established media partners to serve interesting and educational content at key times throughout the recruiting journey. JPMorgan Chase partnered with LinkedIn and Snapchat in North America and globally with BuzzFeed. The intent was to surprise and delight candidates on platforms where they know they are.

JPMorgan Chase launched its first-ever recruitment marketing campaign on Snapchat advertising in "campus stories" targeting US high school and college graduates during 2016 graduation season (May – June). The campaign included 6 video ads aimed to inspire students as they think about their "next step", highlighting the different jobs available at the firm and the diverse skills they call. The ad campaign was supported by a branded graduation geofilter available across 2,000 campuses on graduation day.

During peak recruiting season JPMorgan Chase worked with BuzzFeed to develop a custom content program which included 3 lists and 1 poll that promoted the benefits of working at JPMorgan Chase - "11 Life Skills That Are Also Awesome Career Skills", "10 Perks Of Working At A Global Company", "11 GIFs That Perfectly Describe Your Summer Internship Experience" and "How Do Your Interview Habits Stack Up?". The content was distributed in key markets globally and translated in-language for Japanese candidates.

JPMorgan Chase was the exclusive launch partner for LinkedIn's new student app designed to be a personalized job exploration guide for campus audiences. Through working closely with the LinkedIn development team, JPMorgan Chase helped create a unique first-to-market opportunity. The campaign ran from April through October as a seven-part career advice series created by in-house JPMorgan Chase career guidance experts, taking users through a step by step guide of the job exploration and application process as part of the app's 'JPMorgan Chase Extra Credit' section. The series followed the graduate recruitment cycle timeline, providing the right advice for the right stage of the cycle. Designed to help all students, the light hearted animation based series directed users back to the 'Extra Credit' pages on the JPMorgan Careers Website.Here, they could read more in-depth longer form content, register to attend virtual events and explore the rest of the site – with the aim of increasing their knowledge and confidence when starting out on their career journey, and for some, putting JPMorgan Chase on their consideration list.

These high profile branding partnerships were supported by a highly targeted conversion campaign including social (Facebook, LinkedIn, Twitter, Instagram), programmatic and regional job board ad placements. This campaign utilized behavioural and interest-based targeting to reach non-traditional audiences at the point of decision making, allowing for campaign creative and messaging to be honed to specific markets and enable students to explore and register for events and programs right for them.

Snapchat: The JPMorgan Chase geofilters garnered 3.1 million views and 73,000+ swipes within 27 hours, and the campaign video series received a total 17.5+ million views. The brand saw an 18% lift in favourability and 18% lift in internship and employment association.

LinkedIn: The content series generated 446,000+ impressions, with each app user engaging with at least 2 pieces of branded Extra Credit content. The wide reach of the app enabled JPMorgan Chase content to be viewed by students from 5,900+ schools and colleges – both within the US and internationally – substantially increasing the company's campus footprint during the recruitment season. 29,000+ individuals demonstrated intent to receive further advice and learn more about the firm and opportunities, representing a 21%+ lift in traffic to the JPMorgan Chase careers website from the LinkedIn platform.

The highly targeted programmatic, social and job board components were successful in driving significant application volumes for pipeline programs from a broad range of candidates.Some programs saw as high as 61% of applications being driven by paid media. 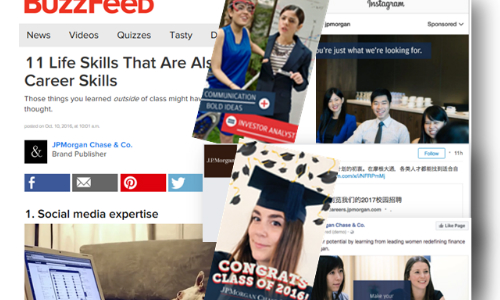