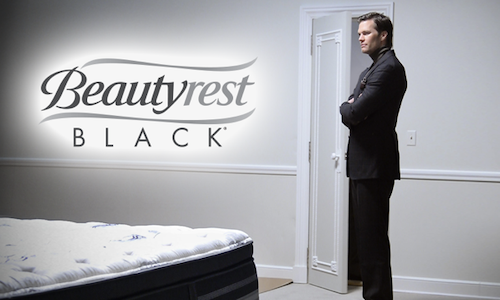 Beautyrest Brand brought its luxury brand of Beautyrest Black mattresses into the spotlight in 2016 through an integrated marketing campaign, "Dream in Black," featuring football superstar Tom Brady. As the advertising and PR campaign were being lavished with attention, Beautyrest Brand aimed to increase awareness and conversation online through:

Tom Brady was a perfect spokesperson for the luxury line of Beautyrest Black mattresses to align with, given his level of celebrity in the lifestyle and performance arenas. Knowing the partnership and ad campaign would resonate with consumers and elevate the perception of the brand, we decided the social conversation should utilize a "less is more" approach, using targeted and strategically-timed tactics to reinforce the messaging of the ad spots without alienating consumers by oversaturating their social media feeds.

The centerpiece of our social media efforts invited consumers to win a Beautyrest Black mattress of their very own by answering a "photo-hunt" style quiz made up of details from the ad spot. The value of the prize – a chance to win a high-end luxury mattress - drove consumers to the brand's website (a key sales driver for the brand), while qualifying entry engagement required them to remain on the site for an extended period of time.

Tom Brady's owned Facebook page provided an additional tool to boost awareness and visibility of Beautyrest Black mattresses to its built-in audience of 4.3 million fans. We worked with Tom and his team to create original content that was genuine to his personal brand while conveying proper messaging about the product. Posts were strategically scheduled to coincide with key sales events, such as Fourth of July weekend, and topical moments in which Tom's name was top of mind in the cultural conversation, such as his return to the field for the '16-'17 NFL season and during his off-season training.

Rounding out our approach, key assets used for "always on" social media content were created, ranging from a long-form video of the ad to frame grabs and GIFs, creating a consistent and unified brand message for consumers across disciplines. These images were published on Beautyrest social media channels upon the campaign's launch to boost the ad's message immediately after the announcement. Assets were utilized throughout the year in micro-campaigns targeting specific audiences, such as fans of Tom Brady (Facebook) and the television audience exposed to the traditional Beautyrest Black mattress TV spot (via Twitter's TV targeting feature).