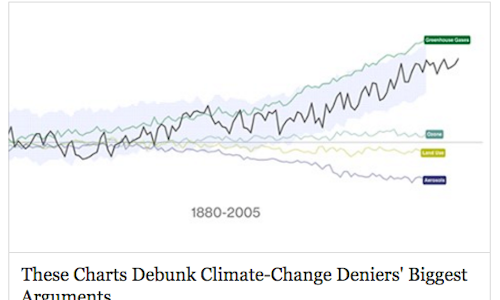 What really IS warming the world? Is it the sun? Is it volcanoes? Is it deforestation? Ozone pollution? NO! It really is greenhouse gasses, guys. Atmospheric CO2 levels are 40% higher today than they were in 1750. It's not the sun…it's us. There's no contest.

The question of whether or not the world is getting warmer is no longer up for debate. 2014 was the hottest year on record. Until 2015 was even hotter, and now 2015 was the hottest year on record. Every year, record after record after record, broken. Everyone knows global warming is a growing issue, but unlike war and disease and other global events, it's not something you can actually see day-to-day. It's hard to translate the evidence into something people can actually grasp as impacting their lives. Every. Single. Second.

Three questions drive the contentious debate over climate change. Is the Earth really warming? If so, is man-made pollution really to blame? And is the level of carbon dioxide in the atmosphere really rising precipitously? In 2015, Bloomberg set out to answer these questions with hard numbers. We wanted to not only let people SEE climate change on social media, but also interact with it and watch our world warm before their eyes.

Inside each of these packages are multiple interactives that we shared and promoted across our social media platforms, allowing people to literally track global warming from their Twitter and Facebook feeds. We also allow users to isolate one factor that might be influencing global warming-- whether it be the sun, pollution, volcanoes-- and see exactly how that one thing is impacting the environment alone. We also allow users to see exactly how much warmer the Earth has gotten over the last 136 years. Finally, we built our very own Bloomberg Carbon Clock to track CO2 levels in real time and routinely encouraged our social followers to check their clock. Levels of CO2 in the Earth's atmosphere right this second are at 404.19639578 parts per million. Wait. Nevermind, that number is different now. It changes rapidly every second. Want to see exactly how much carbon dioxide is in the atmosphere RIGHT THIS SECOND? We built a clock for that!

Facebook and Twitter were the driving forces behind promoting these data visualization pieces. The campaign is never-ending because we continue to update the numbers each day, so we can constantly tweet out or post updated numbers. We also worked with the video team to create made-for-social digital original videos explaining the phenomenon, including an extremely successful video titled, "The History of Global Warming in 3 seconds." We continue to embed the interactives into articles to strengthen our new content, including our extensive coverage of the Paris climate talks, Obama's climate agenda, climate change legislature and new scientific findings. Whenever we have a new climate story, we can use these videos, .gifs, charts, and graphics to take the story to new heights on social.

We have seen massive success with our climate change data visualization on social. Both our Facebook and Twitter accounts have seen tremendous growth over the course of 2015.

"What's Really Warming the World" exploded, and became our #1 article in all of 2015, with over 2 million UVs. A whopping 89% of the total UVs came from social. Facebook alone accounted for 53%. Almost half of the article page's total traffic (47%) came from social, with Twitter and Facebook leading the pack.

All the climate change data visualization components performed above average for us on Twitter, in link clicks, RTs, and likes. We also saw incredibly high Facebook numbers, significantly above average on each post.

Our "Global Warming" in 3 minutes video reached over one million people of Facebook, with 160K plus views. 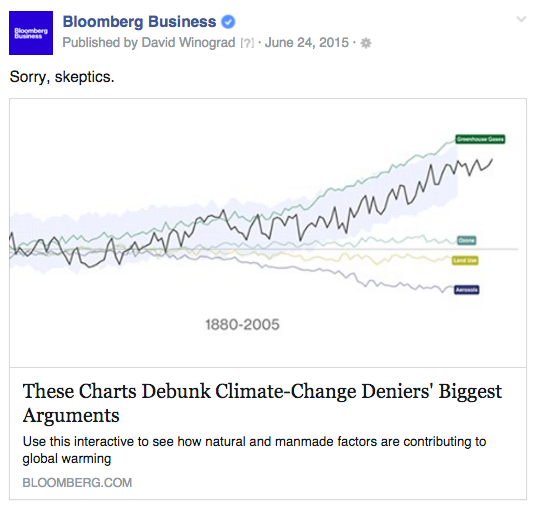 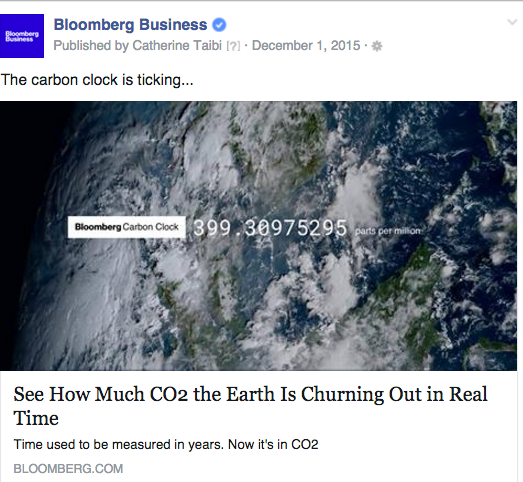 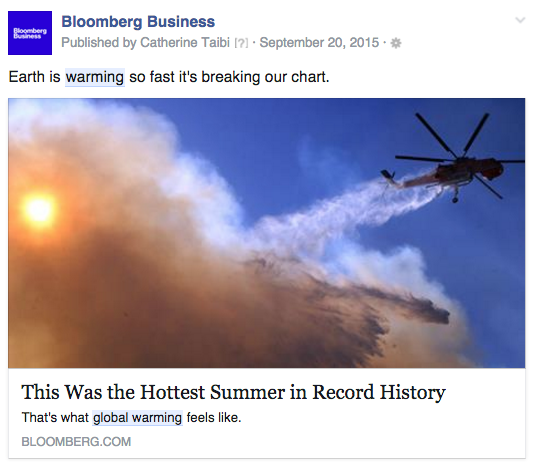 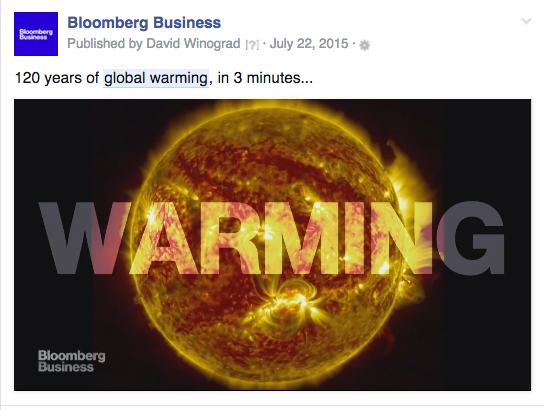 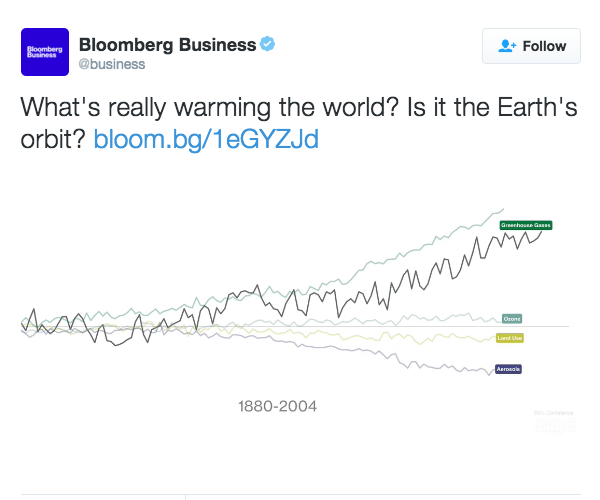