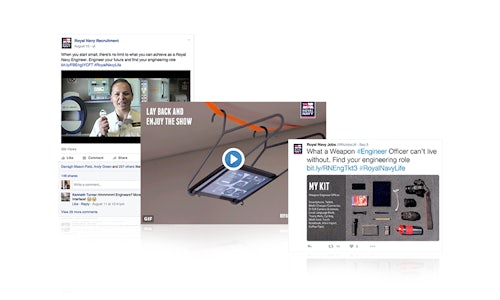 The Royal Navy is no ordinary organisation. Its role in protecting the nation's interests all over the world is of enormous importance. So, when they came to us asking for help attracting engineering graduates and school leavers, we were happy to accept the challenge.

The engineering branch of the Royal Navy is competing with industry giants like BAE and Rolls Royce for the highest quality graduates, while there is also a general skills shortage in the UK.

The Royal Navy offers some of the most exciting engineering careers imaginable, with benefits including travel, adventure and the chance to work with incredibly sophisticated equipment.

We wanted to highlight the range of professional and personal opportunities available to candidates.

While there was significant interest in the existing TV advertising, our biggest task was channelling that interest into an application for a particular role.

Research identified that our target audience were typically problem solvers. We needed to create a connection between their natural aptitude for fixing things, and the demands of being a Royal Navy Engineer.

In doing this we could put seemingly unobtainable engineering feats within the reach of the average school leaver or university graduate.

The three main objectives were:

A career in the Royal Navy isn't for everyone. That's a fact that we didn't want to ignore, shy away from, or generally underplay. One key reason is that huge number of poor candidates who fail the recruitment process, or worse still, the training, is no use to anyone.

Obviously a one-size-fits-all solution wasn't going to be suitable.

We needed to start by creating a meaningful connection with our varied audiences, giving them easy access to the facts, while showcasing the possibilities that Royal Navy life offers. This meant adopting a content first approach across several channels.

Based on our research and objectives, we created an interactive landing site that was designed with a focus on mobile functionality. The experience was based around small, bite-sized pieces of content that encouraged the user to interact.

This content presented similar themes across platforms. This continuity and familiarity provided a seamless transition from social media to the webpage. Social complemented TV, radio and display media to create a fully integrated campaign.

The content looked at a variety of topics that focused on the engineer as an individual, rather than just presenting the technology. This sat alongside content that highlighted different roles, showed how the training worked, and demonstrated the way a typical career would progress.

When consumed together, this content created a holistic picture of the opportunities, and the lifestyle on offer in the Royal Navy. We made the whole experience more relevant and authentic by using real-life stories of currently serving navel personnel. Again, this humanised the content and made it believable, showing the experiences that make a career in the Royal Navy truly life changing.

On social platforms we know that you have to be truthful if you want to provoke any kind of meaningful response, so we went out and discovered people who had stories that would resonate with our audience.

In basing all content on real Navy personnel, we were able to bring the career path to life and make it feel achievable. We researched topics for discussion and the types of content that our audience were engaging with and sharing.

It meant the content we produced was created through a mix of photoshoots and video interviews that were filmed on board a real warship.

From this activity, we were able to deliver short, easily digested social edits, as well as longer edits for the landing page. We used a combination of in-house photographic, design, copy and film talent to create a range of high quality content with an extremely fast turnaround.

The social media campaign ran across Facebook and Twitter, and offered a combination of videos, infographics, job posts and live Q&As. We also sourced a series of Royal Navy 'life hacks' from serving personnel, photographing them for the site, and also for social.

Throughout the campaign there was regular analysis of the performance, and content was consistently tailored to what was working particularly well. After the campaign, this learning fed into the recommendations for future content.

The engineers social campaign produced some of the most engaged with content the Royal Navy has ever produced, and for the first time social out performed paid media. The traffic that came from social was six times more effective than traditional media at generating applications.

The below figures relate to purely organic traffic via Facebook and Twitter from the seventy-two day campaign period between July 6th 2015 and September 16th 2015.

To enable traffic to be effectively driven to the campaign pages, we needed to foster a positive sentiment prior to their arrival. The success of this is evidenced with: 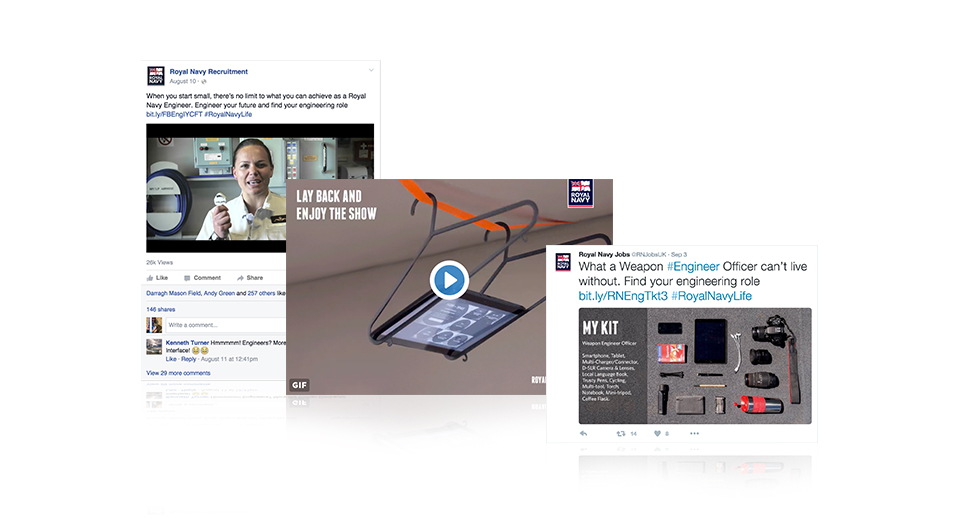 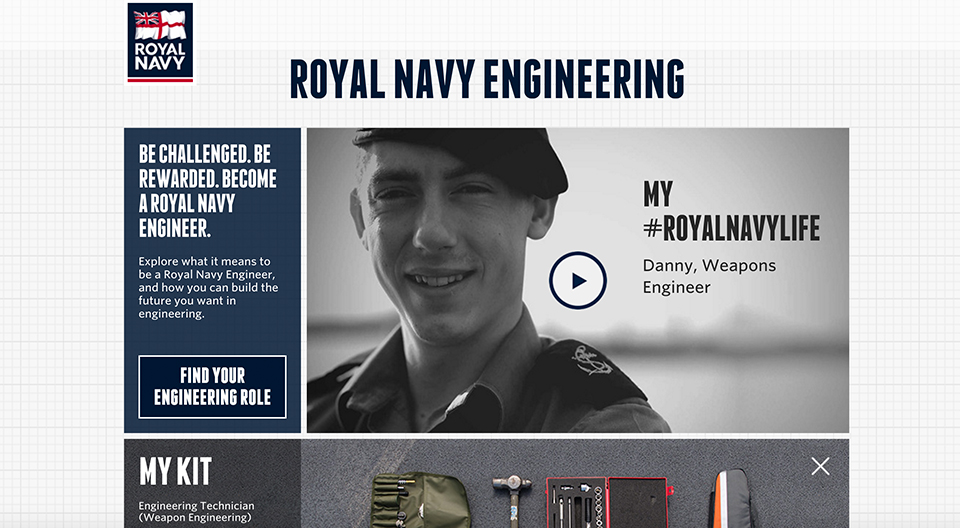 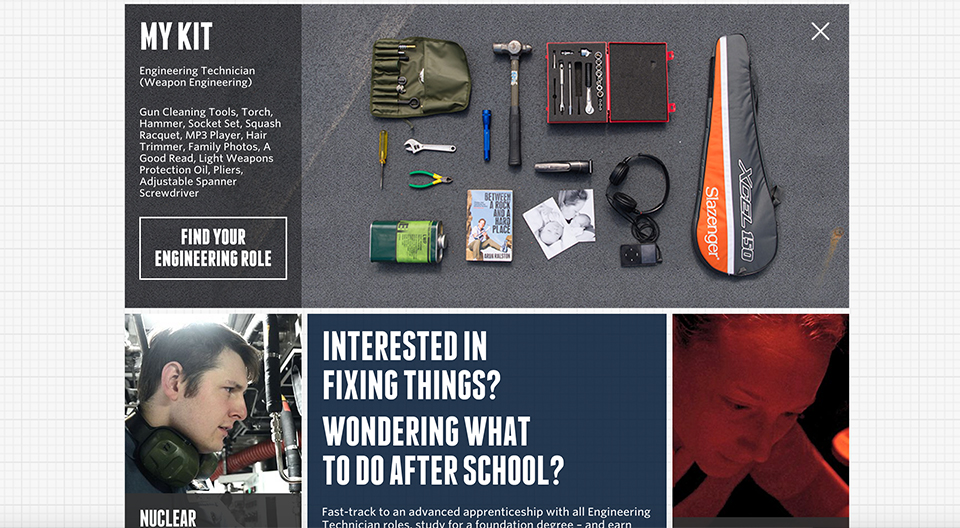 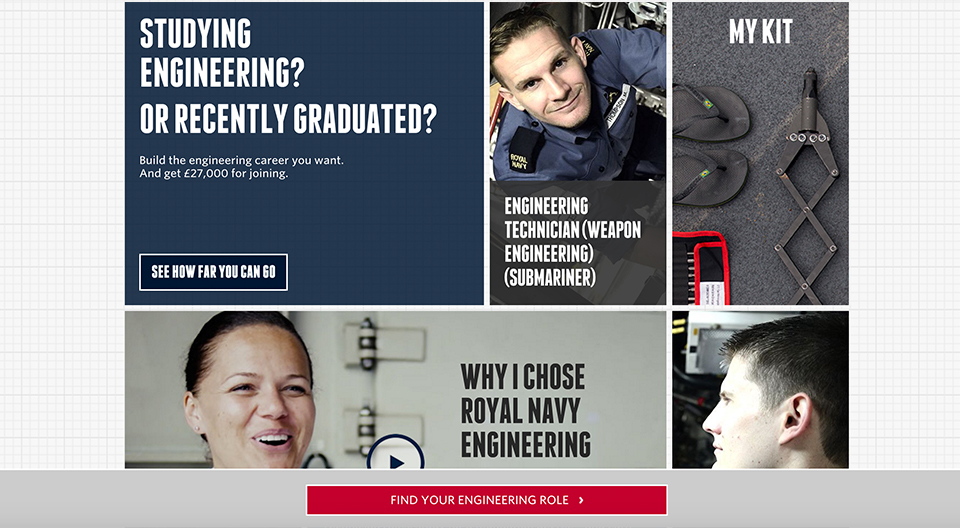